A new Geekbench listing is said to have revealed a number of Moto G6 Play’s specs, detailing a device that Motorola is expected to launch at MWC 2018 in a matter of days, together with the Moto G6 and Moto G6 Plus. The newly uncovered device is understood to be the most affordable of the three and its latest benchmark sighting hints at specs that place it in the lower mid-range segment of the handset market.

Looking at the benchmark results, Motorola’s upcoming Moto G6 Play has scored 1801 points in the multi-core test, while its single-core results sit at 472 points, both of which are relatively average results. These scores are listed as being produced by Qualcomm’s octa-core Snapdragon 430, which is a relatively old chipset that has already been succeeded by the Snapdragon 435. Nonetheless, Motorola may have opted for an older silicon in order to keep the phone’s costs down. Furthermore, the Geekbench information lists 3GB of RAM as being included, something that should help counteract the slightly older processor when it comes to handling multiple tasks. Aside from the information provided by the Geekbench results, the Moto G6 Play is rumored to be available in both 16GB and 32GB storage variants, while just like previous Play models, the Moto G6 Play is set to feature a large battery, supposedly a 4,000mAh one. In terms of the device’s design, Motorola is expected to construct it out of metal and glass, with its front panel reportedly accommodating a 5.7-inch 18:9 display, following in the steps of recent design trends. Also, just like its more expensive siblings, the Moto G6 Play is set to feature a fingerprint scanner, although one that may be moved to its rear plate.

Moving on to the camera department, the Moto G6 and Moto G6 Plus are set to boast dual-camera setups on the back but the budget-friendly Moto G6 Play is rumored to settle for just one 12-megapixel sensor, while its top bezel will boast a sensor of a currently unknown megapixel count alongside an LED flash, according to previous leaks. Keeping in line with Motorola’s traditions, the Moto G6 Play will supposedly run nearly stock Android 8.0 Oreo out of the box. Once launched, Motorola’s Moto G6 Play is rumored to be available in Dark Charcoal, Deep Blue, and Gold, with pricing expected to start at just under $200. 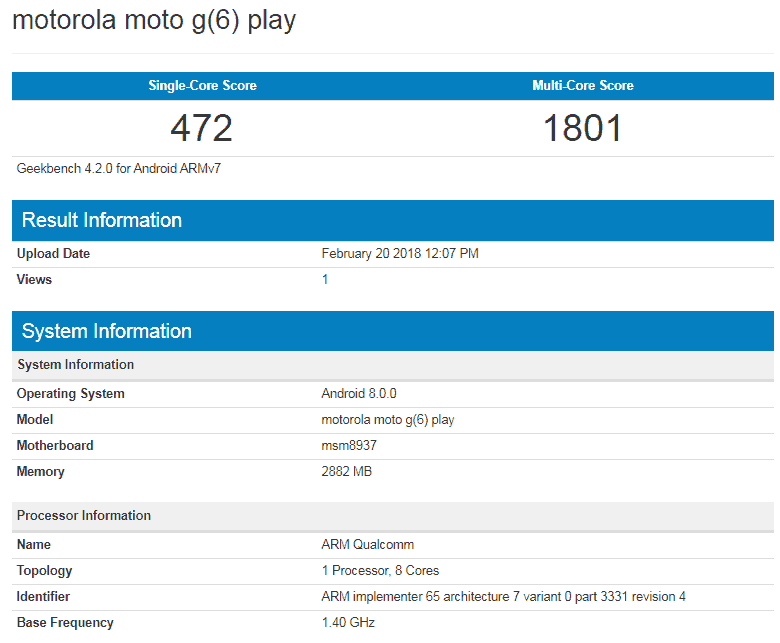