Skip to content
Advertisement
Trusted By Millions
Independent, Expert Android News You Can Trust, Since 2010
Publishing More Android Than Anyone Else
57
Today
97
This Week
559
This Month
6312
This Year
116290
All Time
Advertisement Along with the Galaxy S9, Samsung also debuted the Galaxy S9 Plus at Mobile World Congress today, in Barcelona. We got a change to experience it in their “Experience Zone” after the show, and it’s a mighty fine piece of hardware. It is actually a bit more different from its smaller brother this year, other than the screen size of course. The big thing it has going for it is actually the camera.

Now we talked about the camera on the Galaxy S9, and how it’s pretty good already. But the Galaxy S9 Plus does have the advantage of having a second sensor for shooting. And Samsung actually did some rather cool things here, instead of just throwing the Galaxy Note 8’s camera in here. It is still a dual 12-megapixel setup, with a wide-angle and a telephoto lens. But Samsung is also debuting a few tricks here, including dual-aperture. This basically will allow the camera to go from f/2.4 to f/1.5, when needed, automatically. Now since you normally need more light when you’re in low-light situations, and the hands on area was not a low-light situation, it was pretty difficult to check it out for ourselves. But it does look very promising. 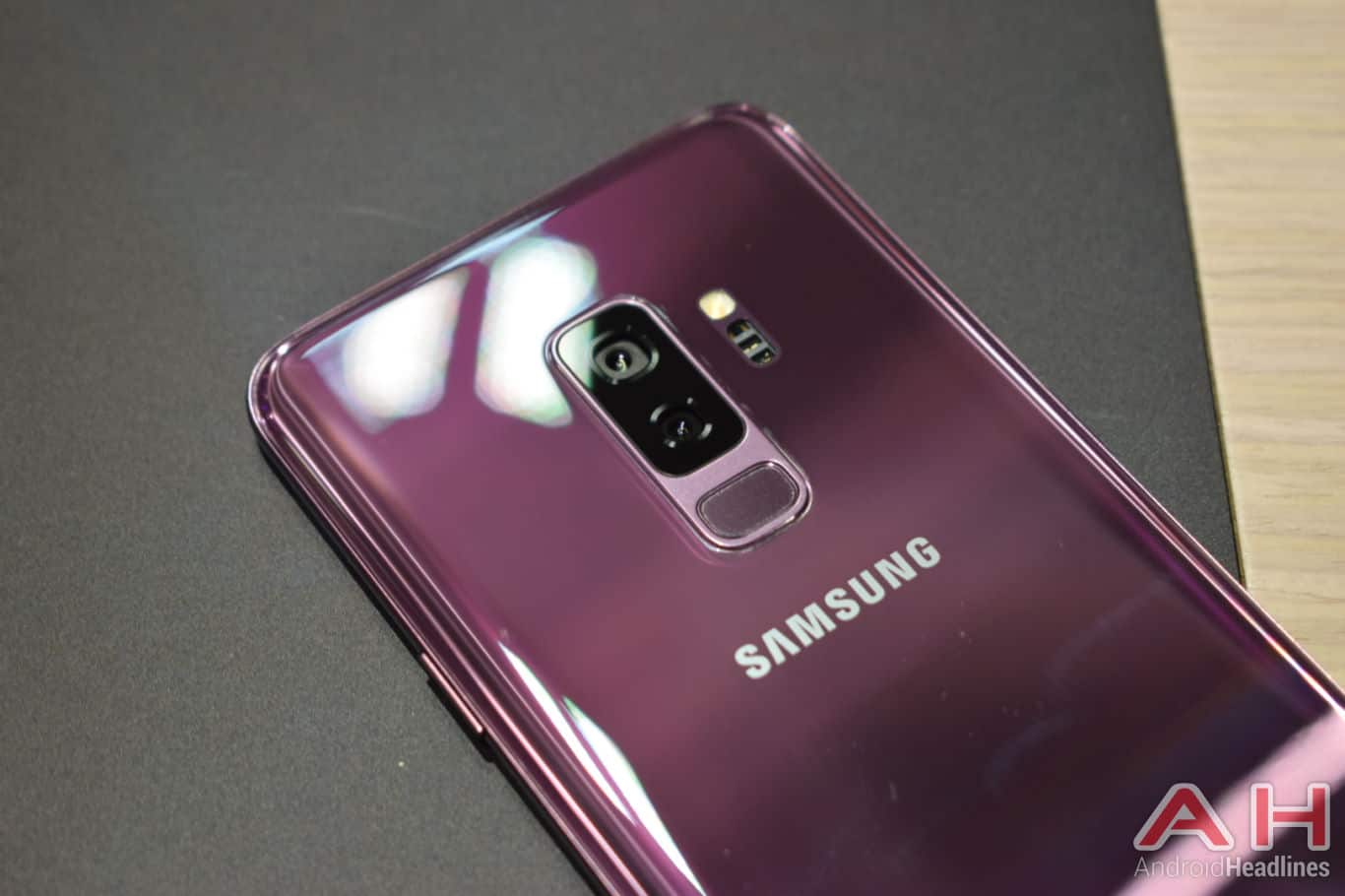 Of course, with this camera, you do also get a few other pretty fun features like ARemoji. This is also available on the Galaxy S9, and it’ll likely be Samsung’s most popular feature this year. It allows you to essentially turn yourself into an emoji, that looks just like you. But you can also make yourself an emoji based on other animals and even Disney characters, thanks to the partnership Samsung made with Disney here.

Like the smaller Galaxy S9, the Galaxy S9 Plus also has the fingerprint sensor below the camera. Making it easier to reach and use. This is perhaps the single biggest upgrade for the Galaxy S9 lineup compared to the Galaxy S8 lineup. We did try out the fingerprint sensor, and it worked just as advertised. Allowing you to quickly lock and unlock the device, and of course, it does have support for unlocking a ton of apps – as should be expected, since that is built into the Android operating system now. Samsung did keep the headphone jack here, which is nice, and the speaker grille is still at the bottom. But Samsung is using the earpiece as a speaker grille as well, for dual speakers, and the company says its the loudest speakers ever on a “Galaxy Phone”. And that seems to be true. These get very loud, all without distorting the sound. This is likely due to the fact that AKG has tuned these speakers. 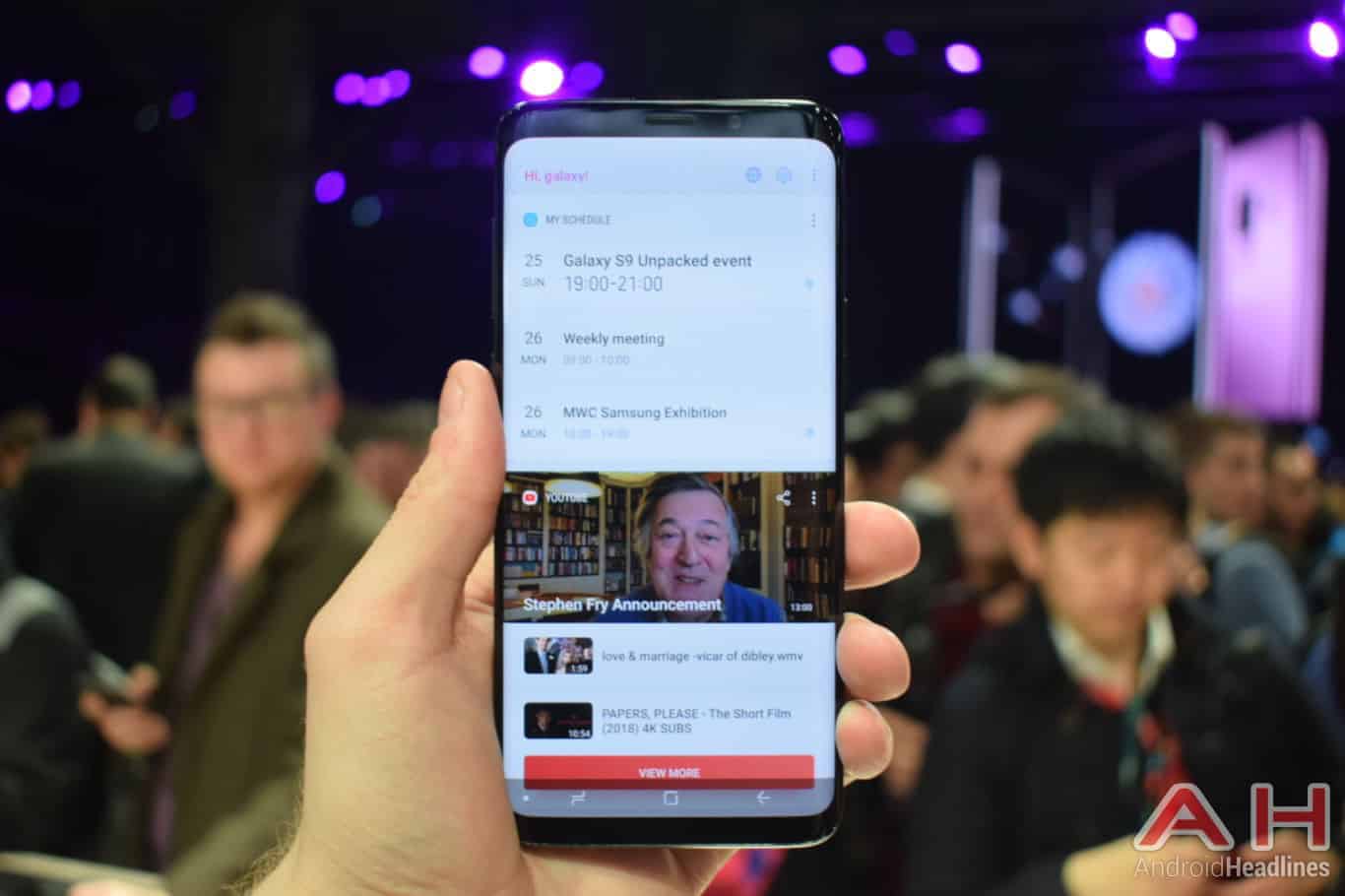 The Galaxy S9 Plus does have 6GB of RAM with the Snapdragon 845, while the smaller Galaxy S9 sports 4GB of RAM. During our hands on time at the event today, we didn’t actually notice much of a difference here with speed and such. So while it’s nice to have 6GB of RAM, that shouldn’t be the reason why you grab the Galaxy S9 Plus over the Galaxy S9. The reason should definitely be the camera (or at least the overall size). Samsung has also done it again with the display. It’s a Quad HD Super AMOLED display, which looks amazing, even better than the Galaxy Note 8 – if that was possible. Of course, Samsung doesn’t mention specs in its presentations anymore, so many may not have known this. But it is worth noting. Especially since Samsung does make some of the best OLED displays on a smartphone.

Software, we have to talk about it. Those that were hoping to see a big overhaul on Touchwiz, or Samsung Experience as it’s called now, well it didn’t happen. It’s basically the same software from last year’s Samsung smartphones. Which isn’t really a bad thing. Sure it is bloated a bit, but it’s not that bad. It is running on Android Oreo, so it is running the latest version of Android, which is definitely nice to see. And will likely get updated to Android P and possibly Android R. Although, Samsung does not promise two years of operating system upgrades, like other companies out there. Overall, the Galaxy S9 Plus is a pretty impressive smartphone, and it goes up for pre-order later this week, on March 2nd.