The Xiaomi Redmi 5 Plus seems to be drawing nearer to its global market release as the international model of the device was recently certified by the Wi-Fi Alliance. The smartphone was originally introduced in China last December, and although it has been available to prospective customers outside of China through resellers such as GearBest, it has yet to enjoy an official global launch. Nevertheless, the recent approval issued by the WFA suggests that Xiaomi is preparing to expand the smartphone’s availability soon, and it’s possible that the device has already been scheduled for an official unveiling at this year’s Mobile World Congress in late February.

According to the WFA certificate, the Xiaomi Redmi 5 Plus runs Android 7.1.2 Nougat out of the box, much like the original model launched in the Far Eastern country. While an eventual update to Android Oreo is not out of the question given that Xiaomi is already working on Oreo-based builds for some of its existing devices, this process may take some months following the smartphone’s debut, as a potential update will likely first be distributed as a beta package for volunteer testers. As far as hardware is concerned, the global variant will also likely share the same components as the model launched in China, which would include a 5.99-inch IPS LCD panel with an elongated 18:9 aspect ratio and a resolution of 2,160 by 1,080 pixels.

The Xiaomi Redmi 5 Plus is powered by the Snapdragon 625 chipset from Qualcomm, housing eight ARM Cortex-A53 cores clocked at up to 2.0GHz and the Adreno 506 graphics chip. The RAM configuration is split between two different models based on storage, so while the variant with 32GB of memory carries 3GB of RAM, the 64GB model has 4GB of RAM instead. It’s unclear whether one or both of these variants will be distributed globally, and what launch prices they may carry. But as a point of reference, the Xiaomi 5 Plus with 32GB of memory launched for around $151 in China, whereas the 64GB model was available for roughly $196. There’s no reason to believe that the global variant(s) won’t fit in the same price bracket but either way, more official details on the matter are now expected to be made available in the coming weeks. 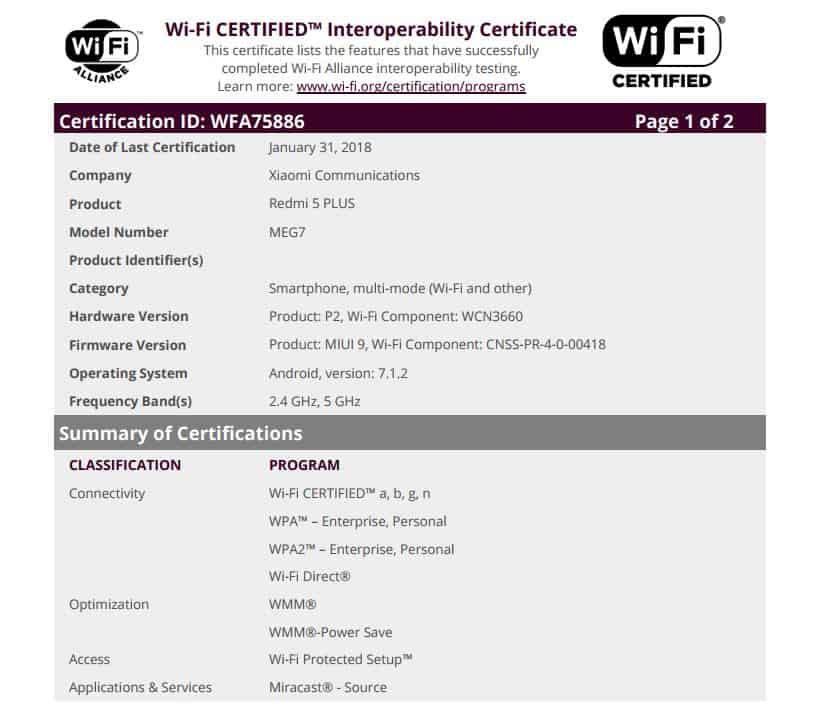