Foxconn Technology Group is increasing its presence in the United States as earlier this week the tech giant agreed to acquire a seven-story office building located in downtown Milwaukee, which will apparently be used as the company’s North American headquarters. Interestingly enough, this particular office building is located roughly 30 miles away from a Foxconn flat screen manufacturing facility that’s currently being constructed in Mount Pleasant, Racine County Wisconsin, which will have the capacity to employ roughly 13,000 people.

Meanwhile, the 132,800-square-foot building located at 611 E. Wisconsin Avenue, along with a 2-acre site containing a large parking lot was acquired by Foxconn from Northwest Mutual Life Insurance Co. for an undisclosed price. However, reports suggest that the property has an assessed value of $11.5 million, of which $8.2 million is accounted for by the land. Either way, the purchase is expected to be finalized by June 2018, and more details on the transaction could be made available at a later date. In any case, Foxconn’s purchase of the seven-story office building in downtown Milwaukee could provide more jobs to the city, and according to reports, by the end of 2022, Foxconn could have around 870 new employees in southeastern Wisconsin, covering areas such as finance, human resources, marketing, and information technology. Another interesting aspect is that most industrial companies in Milwaukee tend to have their headquarters in the suburbs, whereas Foxconn’s new offices will be located downtown. Meanwhile, Foxconn was welcomed to the center of the city in a recent statement issued by the City Development Commissioner, Rocky Marcoux.

Foxconn has had an eye on expanding into Wisconsin since last year in June when news broke that the tech giant might build a new plant in the aforementioned state. The tech giant already made several moves to expand its influence in the United States, and the state of Wisconsin is not the only one of interest. Last year the company was considering pouring $10 billion in the United States Heartland, with thoughts of further investing into up to seven additional states throughout Middle America. Foxconn is a major component supplier for numerous consumer electronics companies including Apple, Amazon, Microsoft, Sony, and BlackBerry to name a few, and last year the tech giant also acquired 66 percent of Japan’s company Sharp. 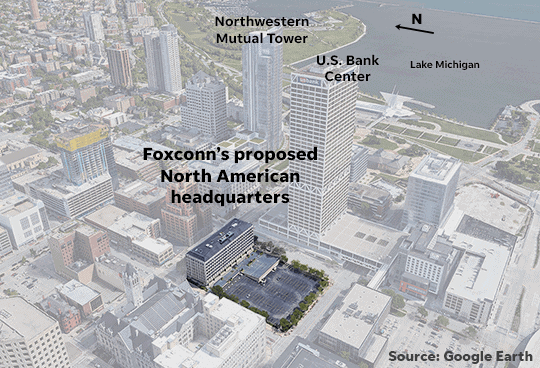