One of the most highly-requested Facebook features of all time has been a dislike button and the social network is finally testing such a feature, but it won’t necessarily work like users may be hoping or expecting. In the past, Facebook said that it would steer clear of a dislike button because it would add too much negativity. Instead, the social network opted to add various reactions so that people could better interact with others’ posts and express how they feel. However, Facebook is now testing a downvote button that would work similarly to how downvotes are on Reddit and other sites. Only a few users in the United States can see this new feature, and it’s all still in testing for now.

While a dislike button would allow users to express their disapproval of various posts on the social network, the new downvote button that’s now in testing doesn’t work quite like that. First of all, it won’t be available for all posts, as it is designed for comments on posts from public pages. Downvoting a certain comment would not be as harsh as disliking it or disliking the entire posting, and it would help hide offensive, abusive, or inappropriate comments. On many sites, for instance, downvoted comments are downgraded and hidden, while upvoted comments appear front and center. A Facebook spokesperson clarified that the social network is simply testing this downvote feature so that users can provide feedback about comments on various posts from public pages.

Since this is only a test run available only for a few select users in the United States, there’s a possibility that this feature might not even make it to Facebook or become available for all users worldwide. Nevertheless, this marks the first time that Facebook has been testing such a feature resembling a dislike button, and it could help bury disturbing or offensive comments to the bottom of the feed. This beta downvote option resembles Reddit’s scheme so much that Alexis Ohanian, Reddit founder and CEO, said that it was the “sincerest form of flattery.” It remains unclear for now just how many U.S. Facebook users have access to this experimental downvote button, or whether this feature will eventually become available to all users. For now, the official tools to react to a post or comment are the existing reactions: Like, Love, Sad, Haha, Angry, and Wow. 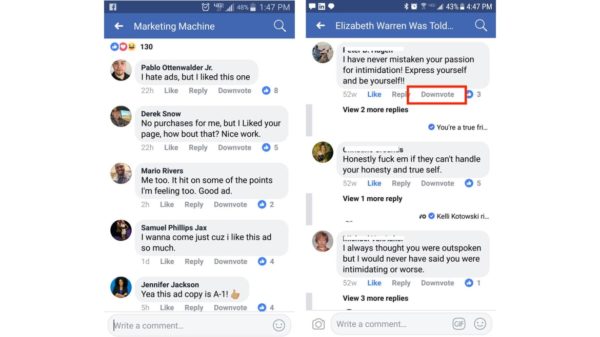