With MWC 2018 due to take place at the end of the month it is expected there will be a number of new phones announced and/or already available to buy by this time next month. So there are plenty of new release smartphones to look forward to over the coming weeks and months. If, however, you find yourself in the market for a new smartphone right now – then here are our best Android phone picks for February, 2018.

The HTC U11 offers buyers an experience they will not find on most other smartphones as this is the 'squeezable phone.' Thanks to the inclusion of Edge Sensors, the U11 provides owners with a way to initiate any pre-set feature simply by squeezing the sides of the phone. Making this a rather unique smartphone in a market where most of the features on offer at the premium level are fairly generic across brands

What might be a downside for some, however, is this remains one of the few phones on the list which has not adopted an all-screen design. As a result, accompanying the 5.5-inch display is a traditional aspect ratio and a 2560 x 1440 resolution. Another example of where the U11 sticks with tradition is in the rear camera department with his phone adopting a single 12-megapixel rear camera. Most of the core specs are in line with what one would expect from a flagship smartphone, including 4GB RAM, 64GB storage, and a Qualcomm Snapdragon 835 SoC.

The original Google Pixel and Pixel XL are the oldest phones on this list having been launched in the second half of 2016. However, they do remain one of our top picks for those looking for a new phone due to their build quality, emphasis on running the very latest version of Android, and their overall appeal. These are seriously good smartphones for the money and as to be expected the value on offer has increased with age due to their prices dropping. Making these two phones a solid option for those not looking to spend quite as much as what the other options currently go for.

Of the two phones, the experience on offer is largely identical with buyers mainly charged with choosing between a bigger or smaller phone. As both phones feature 4GB RAM, 32GB storage, and a Qualcomm Snapdragon 821 SoC. As well as the same 12.3-megapixel rear camera, 8-megapixel front-facing camera, and Android 8.0 (Oreo) – after updating. With size, however, does come a difference in battery capacity. So not only will those opting for the XL get a 5.5-inch display (compared to a 5-inch display) but also a 3,450 mAh battery (compared to 2,770 mAh).

One of the clear trends of late is the overall increase in the size of smartphones. Something that is unlikely to appeal to everyone. Although those buyers looking for a smaller phone do have the option of the LG G6. As while this one comes in a much smaller package it does not compromise of screen real estate due to its inclusion of a FullVision (18:9 aspect ratio) display that manages to provide a 5.7-inch screen backed up by a 2,880 x 1440 resolution.

The display is not the only newer design trait the G6 adopts as it also features a dual rear camera setup comprised of two 12-megapixel cameras. While the rest of the specs include 4GB RAM, 32GB internal storage, a Qualcomm Snapdragon 821 SoC, a 5-megapixel front-facing camera, and a 3,300 mAh capacity battery.

The Samsung Galaxy S9 and S9 Plus are literally just around the corner with their announcement due to take place before the end of this month. So while it is natural for the Galaxy S8 and S8 Plus to now start dropping down this list, these two devices still remain top quality options for those in the market for a new phone. Arguably, with recent price drops taken into consideration, they are even better value than some of the higher-ranked options. Not only do they make use of a stylish design and sloped edges, but they also pack in the features and the support.

For example, both phones support Samsung Pay, Samsung Bixby, and both make use of Samsung's Edge technology to offer a more usable front display. Likewise, both feature 4GB RAM, 64GB internal storage, a Qualcomm Snapdragon 835 SoC (in the US), an iris scanner, a 12-megapixel rear camera, and an 8-megapixel front-facing camera. Where they differ is in terms of the size of the display (5.8-inch vs 6.2-inch) and in battery capacity (3,000 mAh vs 3,500 mAh). 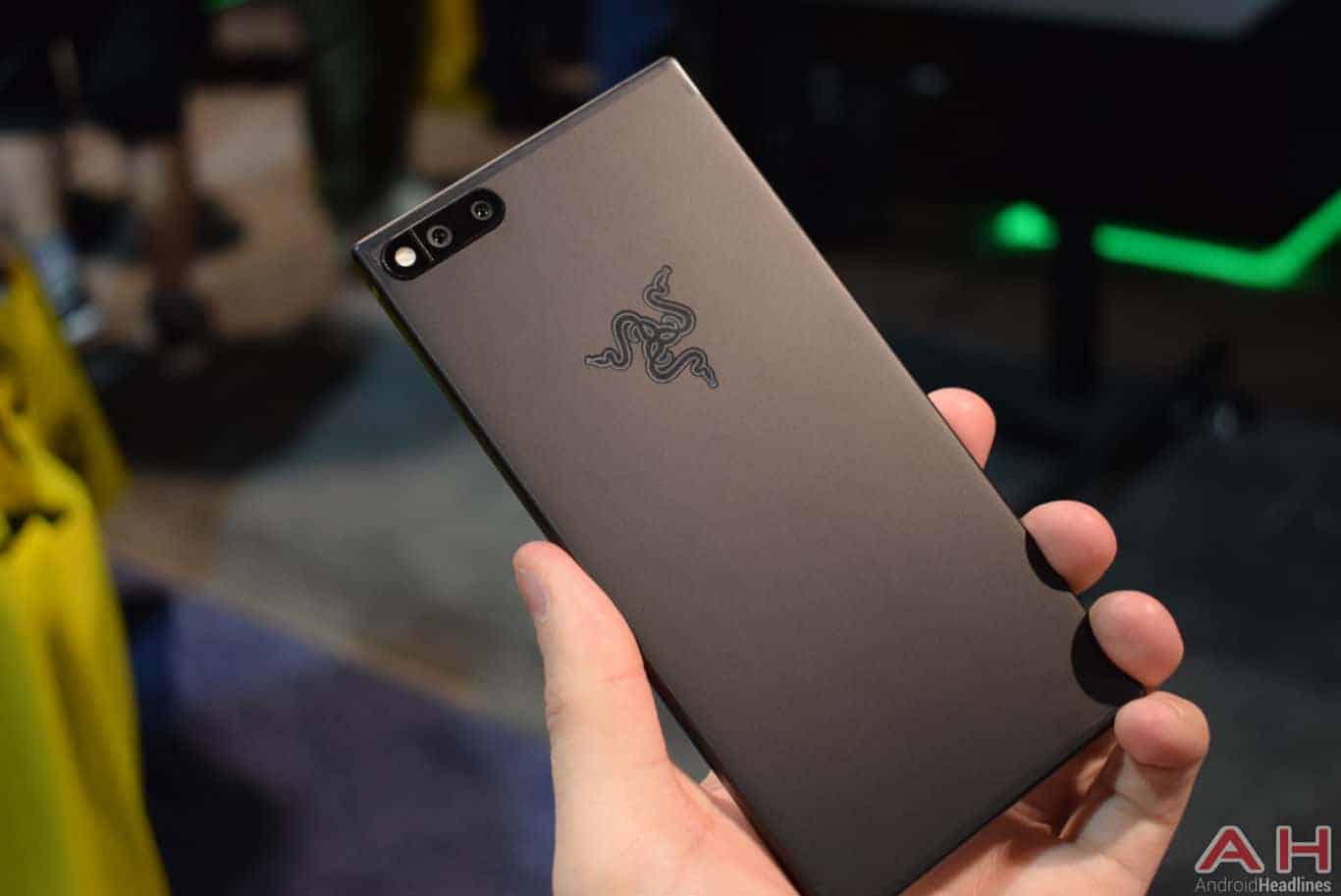 The Razer Phone is a strange mix of old and new as while it does come with some features that you won't find on other flagship smartphones, its general design and more boxy nature looks far more dated compared to the rest of the flagships. So for some, this one will likely be a matter of deciding between a more stylish phone and a more powerful one. As when it comes to the power the Razer Phone does not disappoint. Not only does it feature a core combination of 8GB RAM, 64GB storage, and a Qualcomm Snapdragon 835 SoC, but its display offers a refresh rate of 120Hz – making it ideal for those looking for a gamer-optimized phone.

As for the display in general, the Razer Phone offers a 5.72-inch display along with a 2560 x 1440 resolution. Cameras consist of a dual rear camera setup (comprised of two 12-megapixel cameras) while an 8-megapixel camera can be found on the front. Also on offer is a 4,000 mAh battery, Quick Charge 4+ support, and stereo front-facing speakers

Although the Mate 10 Pro is not strictly speaking a new phone, it is new in terms of US pre-orders only having opened up this month. So for those who had been waiting for this phone to become available in the US, now is the time to place an order. One of the Mate 10 Pro's key selling points is its cameras as not only does the Mate 10 Pro sport a dual rear camera setup (comprised of a 20-megapixel monochrome camera along with a 12-megapixel RGB camera), but it also includes a number of software tweaks to further improve the overall camera experience.

The LG V30 is easily one of the best phones of last year and this is also while arguably being one of the most overlooked phones of the year. If none of the main options have caught your attention so far the V30 is one worth taking a closer look at. This is even more true for those who would like a phone which places a greater emphasis on either its camera capabilities or its audio enhancements – as the V30 does both. Providing buyers with greater and more granular control over both aspects.

This is also a phone which adopts a number of 2017 trending features as the 6-inch front panel makes use of an 18:9 aspect ratio (resulting in a 2880 x 1440 resolution) while the back plate does house a dual camera setup (consisting of 16-megapixel and 13-megapixel cameras). The rest of the specs include 4GB RAM, 64GB storage, and a Qualcomm Snapdragon 835 SoC. As well as a 5-megapixel front-facing camera, a 3,300 mAh battery, and a quad-DAC.

Those who follow smartphone news will likely need no introduction to the OnePlus 5T as this is a phone that has hit the headlines a lot over the last few months. One of the main reasons is the sheer value it offers as it packs in high-end core specs at a very competitive price – for the flagship market. However, this is a core smartphone in general and therefore with the exception of the main specs there is not a lot of additional value on offer with the OnePlus 5T lacking in OTT features, resulting in a smartphone that is missing as much as it offers.

Compared to the standard OnePlus 5 model which launched earlier in the year the T's biggest upgrade is the display which now boasts an 18:9 aspect ratio. As a result buyers can expect more screen real estate to be offered with the 6-inch (2160 x 1080 resolution) screen within a frame that is not that dissimilar in size to the OnePlus 5. There has also been some camera improvements to the dual rear camera setup (made up of 20-megapixel and 16-megapixel cameras). The rest of the specs include up to 8GB RAM, up to 128GB storage, a Qualcomm Snapdragon 835 SoC, a 16-megapixel front-facing camera, and a 3,300 mAh battery. Which of course is capable of very fast charging due to the inclusion of Dash Charge support.

Not much has changed this month with the top two spots and arguable both can be considered to be the best phone you can buy today. Although the two could not be more different making the choice for consumers and easy one. If you are someone who likes extra added value with your smartphone then the Galaxy Note 8 from Samsung is the phone for you. As this is a powerhouse smartphone packed to the brim with added features. Whether you are looking to pay for goods with your smartphone (the Note 8 offers two options), looking for a more secure smartphone (the Note 8 offers multiple ways to secure your phone – including iris scanning), or a more assistant-focused experience (the Note 8 can not only use Google Assistant but also features its own Bixby AI solution), the Galaxy Note 8 has you covered.

It is also worth noting this is the first flagship smartphone from Samsung to feature a dual rear camera setup, which also includes a number of software tweaks that do add to the experience overall. As for the main specs, there's nothing missing here with the Note 8 equipped with a 6.3-inch display which adopts an 18:9 aspect ratio, 6GB RAM, 64GB storage, and a Qualcomm Snapdragon 835 SoC (in the US). In addition to an 8-megapixel front-facing camera, a 3,300 mAh battery, fast charging support, wireless charging support, and fast wireless charging support. There's so much on offer with this phone in fact, that it is easy to forget the Galaxy Note 8 is actually all about the stylus.

The Google Pixel 2 and Pixel 2 XL do not come with anywhere near the amount of features offered by the Galaxy Note 8. So by comparison these are rather plain and generic smartphones. Likewise, even on features that can be compared, the two Pixel 2 devices lack clear trending design traits – such as a dual rear camera setup. This is even more prevalent with the standard version of the Pixel 2 which also lacks an 18:9 aspect ratio. Having said all that though, these remain our picks for the best Android phone overall. One of the main reasons for this is the tight integration between the software and the hardware resulting in smartphones which offer an overall solid experience. Furthermore, Google's use of AI is massively in effect with these two phones where many aspects have been tweaked to perform even better than their hardware might suggest. The cameras being a prime example, as in spite of lacking a dual camera setup, the quality (and features) offered with the Pixel 2 and 2 XL is as good, if not better, than everything else on this list.

As for their main specs, both the Pixel 2 and 2 XL feature 4GB RAM, 64GB storage, and a Qualcomm Snapdragon 835 SoC. In addition to a 12.3-megapixel rear camera, an 8-megapixel front-facing camera, and Android 8.0 (Oreo). In spite of being limited (compared to the Note 8), these phones do offer some added features, including Google Lens, Google Assistant, and Active Edge – the latter of which lets the user activate Google Assistant just by squeezing the phone. Unlike the previous generation devices, however, there are some notable differences between the two models. Firstly, the standard Pixel 2 features a 5-inch display along with a 16:9 aspect ratio, compared to the Pixel 2 XL which features a 6-inch display along with an 18:9 aspect ratio. Likewise, the Pixel 2 packs in a 2,700 mAh battery compared to the 3,520 mAh battery on offer with the Pixel 2 XL.