Virtual reality (VR) units are expected to grow in shipments worldwide from 3.7 million in 2017 to 5 million this year, according to a new forecast from TrendForce. The market intelligence provider revealed in its report that Sony accounted for the biggest portion of VR market last year, with 1.7 million PlayStation VR units delivered to the market, aided by the robust sales of the PS 4 Pro and strong support from third-party developers. Coming in second is the Oculus Rift, with 700,000 VR units sold globally. This is followed by the HTC Vive, which shipped 500,000 VR headsets last year.

This year, Sony’s VR shipments are projected to hit 2 million, thanks to the Japanese tech giant’s vast gaming resources. Additionally, Oculus and HTC are also expected to debut fresh VR models this year, with both companies being forecast to increase their VR shipments to 1 million and 600,000, respectively, based on TrendForce’s projection. The market research firm projects the production of standalone VR headsets to drive the VR market growth as VR manufacturers look to address market challenges from the lack of VR game content and customization. TrendForce noted that while VR head gears grew in prominence in 2016 due to the fact that they were relatively new at that time, shipments of the head-mounted gears declined last year due to those market challenges. Therefore, it makes sense for VR device makers to change their business goals this year and shift their focus to the manufacture of standalone VR gears if they want to accelerate their business growth.

While existing VR headsets are designed primarily for gaming and entertainment, standalone VR devices focus on providing social media interaction, audio and video experiences, and internet services to users. In November last year, HTC launched the Vive Focus, its first standalone VR headset that does not rely on PC or a mobile device to work, providing more freedom of movement to the wearer. The Taiwanese OEM also unveiled a standalone VR headset powered by the Google Daydream platform in May last year. In October 2017, Oculus also announced its standalone “Go” VR headset for the budget conscious users. It remains to be seen, however, how consumers will accept this type of VR headset, not to mention that there are plenty of technical obstacles facing the device’s development. 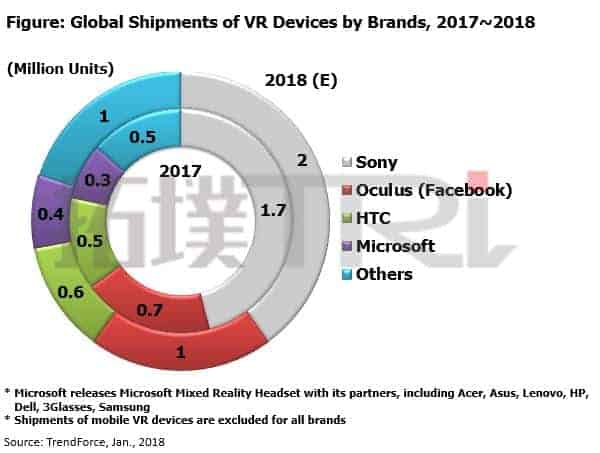