Toshiba has now officially released its Symbio smart home hub in the U.S. according to a recent announcement. Symbio is similar to devices that have been available to the country’s consumers for some time – such as Google’s Home or Amazon’s Echo – and actually accomplishes many of the same tasks. However, it also goes considerably further and well beyond the typical functions included with other smart home systems, in addition to serving as a Smart speaker with Amazon’s Alexa integration.

As to what consumers can expect for their money, Toshiba’s Symbio looks relatively similar to Amazon’s Echo-branded home smart speakers, but with a black and white color scheme. It is also, as mentioned above, Alexa-enabled. So, basic functionality will be about the same when comparing the two devices. Symbio can act as a smart speaker, complete with Bluetooth connectivity and access to streaming services. Playback comes through a premium speaker featuring an ODMD high-excursion driver for high-fidelity sound. It also offers similar intercom functionality between smartphones and Symbio, as well as the ability to use Voice Controls in order to take advantage of smart home devices from across the IoT spectrum. Adding to those features, Symbio includes a smart sound detector which can be used to monitor for loud noises and to send alerts to a smartphone when loud noises are detected. That means it can actively help identify unusual activity such as a fire alarm or break in. However, a simple sound isn’t always very helpful in those circumstances without video.

To that end, Toshiba’s smart home hub also includes a 1080p, wide-angle, low-light capable security camera. The camera also features sound and motion-triggered alerts and actions, as well as the capability to stream the HD video to a smartphone. Finally, the associated Toshiba Smart Home application can be used to interact directly with Symbio and to control other smart home devices it is currently in control of. It would be difficult to find a smart home hub packed with more features than what Toshiba is offering with Symbio. In fact, coupled with a price point currently set at just $249.99 via Amazon and a sleek design, Symbio should probably be among the top considerations for anybody looking to expand on or start building their network of IoT devices.

Advertisement
Buy Symbio On Amazon At $249.99 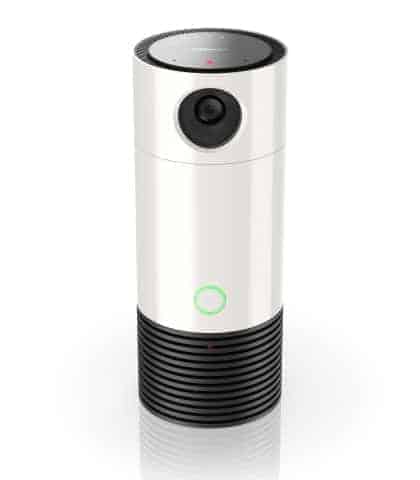