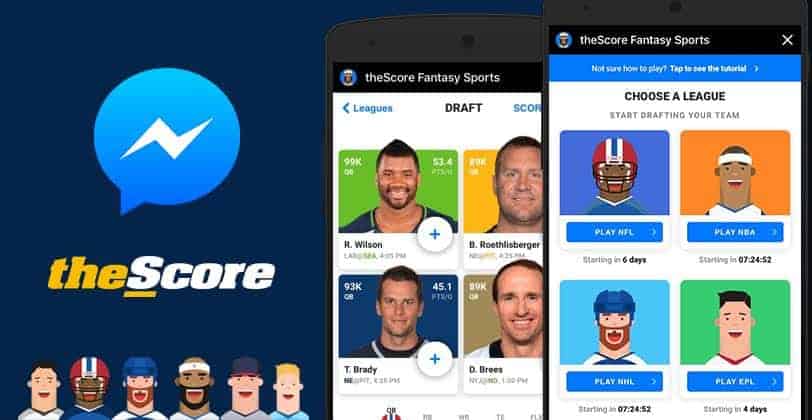 Popular sports app developer, theScore, Inc. has now launched a brand new fantasy sports game for Facebook's Messenger and web platforms. In fact, according to the associated press release – accessible via the source link below – the launch actual marks the first-ever game of its kind. That's because the aptly named theScore Fantasy Sports is playable via Messenger's Instant Games platform and directly in a user's Facebook News Feed. The free-to-play game will initially give players access to contests from NFL Football, NBA Basketball, NHL Hockey, and EPL Soccer. As with other fantasy sports titles, players will pick a league and then build their own line-up based on a set budget, in order to post challenges to friends to see who scores the most points. There will be new challenges daily and more leagues to be added in future updates to the game.

Getting started with theScore Fantasy Sports is also fairly straightforward. Users simply need to open their messenger and select games before searching for "theScore Fantasy Sports." After locating the game, the gameplay is as simple as selecting a league, drafting players, and taking on challenges. Messenger, in the meantime, is probably a perfect platform for these types of titles since they are typically very social. Playing in a messaging app allows users to interact before, during, and after challenges in an intuitive and familiar environment that they are already accustomed to. Better still, since Facebook users are already likely to have Messenger installed and the app ties into the world's most popular social network, it provides an easy way for players to challenge friends and family.

It also makes perfect sense that theScore, Inc. would be the first company to put a game such as theScore Fantasy Sports on the Instant Games Platform. As an already well-established name in the sports applications portion of the mobile industry, theScore has access to a ton of sports data and information at its disposal. Although some of its updates to other applications have seen less than stellar launches, the developer also has a relatively large loyal fanbase and a lot of in designing experiences for fans of the world's sports. So anybody interested may want to head to Facebook's Messenger to check this title out for themselves.

Advertisement
Check Out theScore Fantasy Sports On Facebook Messenger
Trusted By Millions
Independent, Expert Android News You Can Trust, Since 2010
Publishing More Android Than Anyone Else
20
Today
101
This Week
101
This Month
3269
This Year
104748
All Time
Advertisement