Sharp is expected to launch its next mid-range smartphone, the Sharp Aquos S3, on the 16th of January in Taipei, Taiwan. This comes after a poster of the launch event was shared on Chinese microblogging website Weibo. According to the image, the event will commence at 2:00PM Taipei local time and the name of the device is also mentioned in it. On top of that, Qualcomm’s logo can be seen on the top right corner of the poster, indicating that the Sharp Aquos S3 will indeed be powered by a Snapdragon processor.

The Sharp Aquos S3 is the successor to the highly successful Sharp Aquos S2 which was launched back in August of 2017, and it is set to feature a bezel-less display. It may also come in two variants, both of which will pack different processors and run different memory configurations. According to recent leaks and rumors, the smartphone is expected to sport a 5.99-inch Full HD+ display with a resolution of 2160 x 1080 pixels, giving it an aspect ratio of 18:9. Under the hood, the Sharp Aquos S3 which also goes by the model number Sharp FS8032, will be powered by a Snapdragon 630 processor coupled with 4GB of RAM and 64GB of internal storage. On the other hand, it is suggested that there will be a higher-end model which will run on the Snapdragon 660 chipset, paired with 6GB of RAM and 128GB of internal storage.

Meanwhile, renders of the Sharp Aquos S3 suggest that it will feature a dual-camera setup on its rear, and it will be a vertically placed system, much like on the Sharp FS8015 which also leaked a few days back and will also feature a rear fingerprint scanner. The setup is said to consist of 12-megapixel and 13-megapixel rear-facing cameras, while selfies will be handled by a 16-megapixel shooter. Keeping the lights on is a 3,100mAh battery with support for fast charging. It is also Sharp’s first device to run on Android 8.0 Oreo out of the box. The Sharp Aquos S2 which went on sale in August last year, was quite popular in China, and it remains to be seen if the Aquos S3 will be a worthy successor. 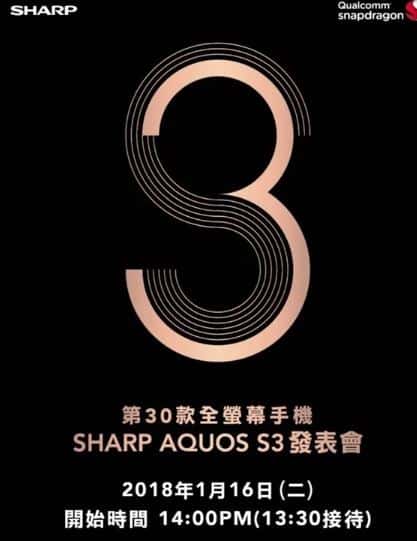