Japanese imaging company Ricoh announced earlier this week at CES 2018 the launch of its Ricoh Theta V Partner Program designed to give third-party developers the necessary tools and platform for creating and sharing their own plugins for the aforementioned 360-degree camera. The platform will launch in spring 2018 but until then, CES attendees have an opportunity to experience Ricoh’s latest tools on the show floor ahead of time.

As a quick reminder for readers who might need it, the Ricoh Theta V 360-degree camera was launched in mid-2017 and was the company’s first 360-degree sensor to be launched along with built-in software plugins designed to expand the device’s capabilities. Software-wise the camera relies on the Android platform, and in turn, this means that third-party developers with knowledge in coding Android applications should be able to make use of Ricoh’s upcoming tools with relative ease. Ricoh’s platform will be launched alongside a new online marketplace for program partners, where third-party developers will be able to upload and share their own creations, and where Theta V owners and users will have the option of acquiring new software. As part of the program, the OEM will also launch the Ricoh Theta V API (application program interface) and SDK (software development kit), all the while providing guidance and additional tools for the creation of third-party plugins.

The company hopes that the opening of the platform will lead to a constantly evolving product, said Ricoh’s Wataru Ohtani in a recent press release, adding that the end goal is for the service to become a standard platform for 360-degree imagery where both businesses and consumers alike can benefit. However, the platform will be compatible only with the latest Ricoh Theta V model launched last year for the price of $429, as previous models don’t support plugins to begin with. The Theta V offers 4K video recording capabilities and has around 19GB of on-board memory, which should be enough to store up to 4,800 4K photos or 40 minutes of 4K video footage. The battery should hold enough electrical energy to last through 65 minutes of 4K continuous video shooting or around 260 4K still images on a single charge. 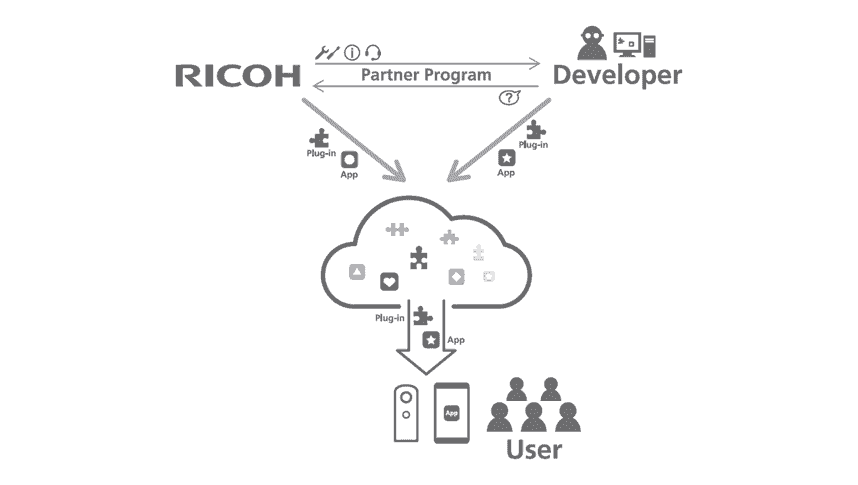