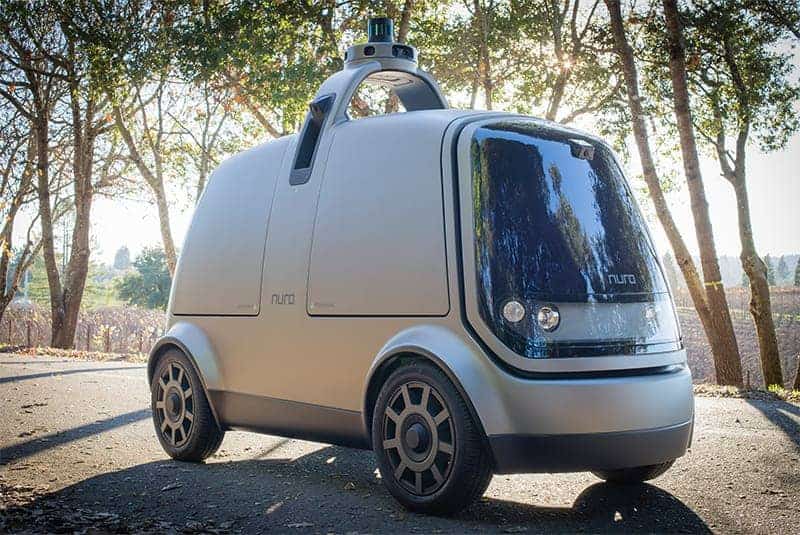 Nuro’s driverless car is built for last-mile deliveries. Nuro, the company created with two former Google engineers, wants to change the way deliveries happen, so it built the Nuro R1, a prototype self-driving car which it envisions being the perfect vehicle for things like food deliveries, or deliveries of any type really, that don’t have to travel at high speeds or long distances to complete the delivery. According to Nuro last-mile deliveries have been increasing and its aim is help carry some of that weight by having its vehicles take care of some of that work.

Currently Nuro only has six vehicles in its fleet, and they’re all prototypes so there is a good chance that the design of the vehicles could change a bit by the time they would be able to officially drive around on the roads outside of testing phases, which it seems the company is in the process of doing at the moment. Unlike other driverless vehicles the Nuro R1, and whatever future cars Nuro comes up with, don’t have any space inside for drivers as there are no controls, steering wheel, or other components that you would find in any of the self-driving vehicles being developed by Uber, Ford, Google, or any of the other companies which are involved in the self-driving car market.

Instead, the R1 and whatever the final product ends up being are meant to be completely autonomous, which is part of the reason for the low-speed, last-mile focus on where the cars would travel. That said Nuro has set things up to where the cars could be controlled remotely in the event that the car would need to be taken over. Up top, the car is fitted with the sensor array module which contains LIDAR technology, cameras and radars. On the sides, there are four doors just like you would have on a normal vehicle, though instead of opening outward they open upwards and are actually fairly shallow, having just enough space for things like some grocery bags, a large package or two, flowers, or perhaps a stack of pizza boxes. Currently Nuro has only been testing the vehicle in a closed off area but it plans to start testing the driverless vehicles on public roads in California later this year.