The latest findings from research conducted by ROCCO and UROS suggests the use of international roaming could be ‘eradicated’ within the next three to five years. The reason, embedded (electronic) SIM, more commonly referred to as eSIM. The research itself is not based on data that suggests this change will happen over this time-span, but instead is based on “confidential data” and the analysis of plans from 107 Mobile Network Operators (MNOs) from 92 different countries. A sample which the researchers state is the first international roaming-related eSIM global research project to take place. Based on the announced findings, the majority of MNOs were all in agreement that eSIM would likely put an end to international roaming once and for all.

Taking the results of some of the findings together, however, does lead to a slightly more contradictory picture. For example, ROCCO and UROS note that of the 107 MNOs surveyed, 75-percent agreed with the suggestion that the rolling out of eSIM will “remove the need” entirely for international roaming. Although when asked about their own support for such a change, the MNOs seemed a little less willing to confirm commitment to a post-international roaming world just yet. With only 53-percent stating they would support outbound roaming and even less (42-percent) stating they would support inbound roaming – the latter of which is arguably the more crucial of the two in regards to any change actually taking effect.

Of course, whether or not eSIM does change the international roaming market as drastically, and as quickly, as is suggested here, the consensus seems to be eSIM will be a market changer in general. As not only does the technology allow device owners to more quickly, and easily jump between carriers within any individual domestic market, but with the influx of connected-devices (beyond smartphones and tablets) that are expected to arrive during the next few years, the use of eSIM is likely to skyrocket compared to the adoption levels associated with traditional SIM cards. In the meantime, however, the full report from ROCCO and UROS (which also looks at how MNOs plan to deal with an increased use of eSIM) is available to download through the link below.

Advertisement
eSIM For The Roaming Consumer 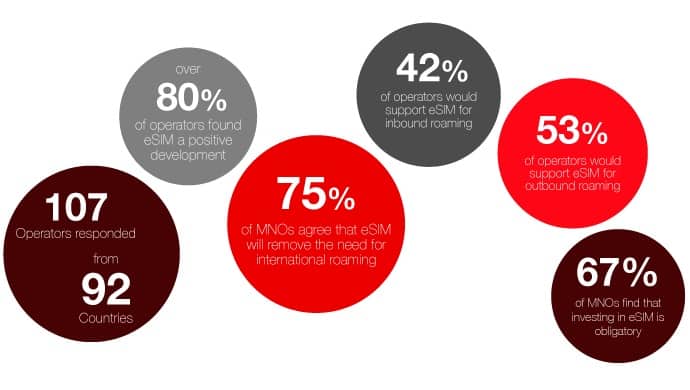