Google had today announced the introduction of ‘Google Pay.’ While this may sound like the launch of a new form of payment by Google, it is not and instead marks the realignment of Google’s existing payments options into one all-inclusive brand – Google Pay.

Android device owners, and Google users in general, will likely be familiar with Google’s already existing payment options such as Android Pay and Google Wallet. Since the release of Android Pay it has become the more dominant of the two payment options, at least when it comes to paying for goods using an Android phone. While Google Wallet has become more of a service designed to send payments from one user to another. Of course, having two different payment solutions could become confusing for some and this is likely why Google has opted to now unify both payment options under the new single Google Pay brand. With a change like this, users of either service should expect a more visual change of branding to take effect soon enough. Which is also what Google has announced today, with Google explaining that “over the coming weeks” users of Android Pay and Google Wallet will see the use of ‘Google Pay’ branding (shown above and below) when shopping online and in store, as well as when speeding through apps using any of Google’s related payment options.

In fact, Google has also confirmed that users of select apps and website – including the likes of Airbnb, Dice, Fandango, HungryHouse, and Instacart – will likely see this change having already taken effect. In either case, going forward and regardless of whether using Android Pay, auto-fill through Google Chrome, or shopping through the Google Play Store, Google Pay will be the new way to pay with Google. To try and make the transition a little easier Google has launched a few promotions to help its users get started. These include $10 off a B&H order over $50, $5 off the first ticket purchased through Fandango, and $10 off any Instacart order totaling $35 or more. For more details on the introduction of Google Pay – including how developers can implement the new payment branding – as well as more details on the new launch discounts, head through the link below. 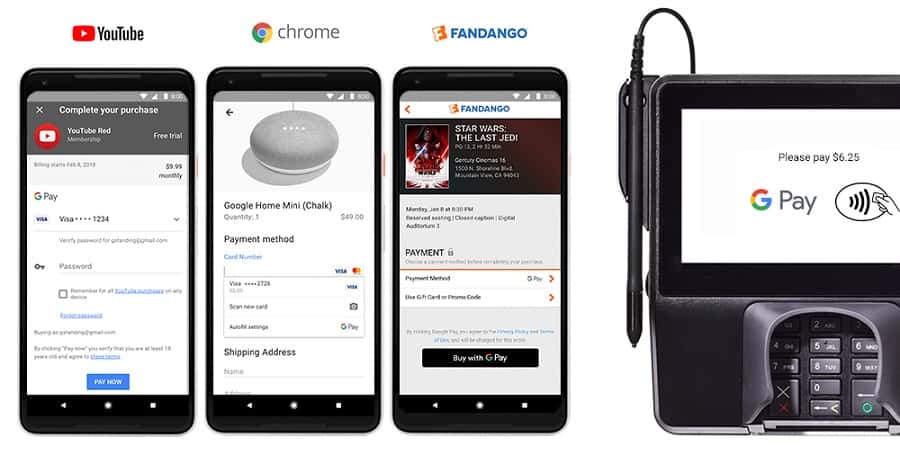