Casio has announced its latest watch which includes two charging methods. Casio’s G-SHOCK line has built up a reputation for its long-lasting, rugged watches, and it appears its latest model is no different. At CES 2018 the company has announced the GPR-B1000, which acts as the latest addition to the G-SHOCK Rangeman series and appears to be aimed at the most adventurous explorers.

In terms of the design, the new watch features a digital LCD display and the G-SHOCK rugged build, with a ceramic casing that is 2mm thick and should provide full shock resistance and is dust and dirt proof. The ceramic material is also said to help improve signal reception with features such as the GPS. Speaking of the GPS, the watch features the worlds first solar-assisted GPS, alongside what Casio calls Triple Sensor – the latter of which allows the watch to collect location data in order to show the current position on the display in real-time while logging any track and point data for future reference. Those who have access to wireless chargers will be able to get a total of 33 hours out of the GPS functionality before the power runs dry thanks to a 5-hour charge, but in the case of the more adventurous situations, solar power can also provide a much-needed top up. Although solar charging is much slower, 4 hours of direct sunshine can provide up to 1 hour of GPS functionality according to the watch brand, something that could prove vital for many. In either case, it is solar charging which keeps the time display on at all times. Speaking of which, to further improve the watch’s basic function of keeping time, it will connect to a number of servers around the world in order to continue displaying the correct time at each location. Other extras included inside the watch are mud-resistance and water resistance for up to 200 meters, while the watch can also tackle sub-zero temperatures according to Casio.

Aside from these more survival-focused features, owners of the watch will also be able to connect to the G-SHOCK Connected smartphone app via Bluetooth, which will then allow users to review their previously logged data or even map out new routes. For those interested in the watch, Casio will be offering the GPRB1000 for $800 starting this April in both Black and Khaki colors, and will be available through official G-SHOCK retailers, its online store, and select Macy’s stores. 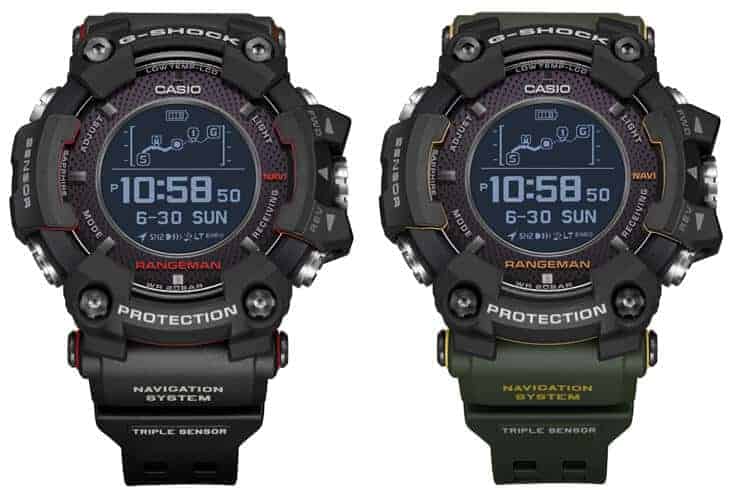