Channel Master might be better known for its range of antennas but it also seems as though it has now gotten into the Android TV game as the company has a new device for you to consider, the Stream+ box. This is a device that was first announced last month although at the time of announcing it had yet to become available to pre-order. That has now changed though, with orders now being accepted via the company’s website and the price set at $99.

With this being a product from an antenna company, it will probably come as no surprise that it is an antenna-focused device. Which does make it fairly unique in Android TV land. As although some devices do come equipped with antenna compatibility, none position itself specifically as an antenna box. Channel Master is, however, stating the Stream+ is “the streaming box for antenna owners.” As for why Antenna owners may be interested in this one… well, the first reason is that it does come equipped with dual internal TV tuners (two ATSC 1.0 tuners). So users will be able to watch one live broadcast while recording another. Something which most other Android TV devices cannot do without the help of an accessory that needs to be purchased on top of the cost of the device. Speaking of recording, the Steam+ does also feature an on-screen channel guide (powered by Live Channels) along with DVR capability. So as well as being able to see what’s on, record content through the two tuners, users will also be able to pause and rewind live TV as well. So yes, this certainly does seem to be a product which caters more to those who are interested in antenna-received TV transmissions. Not to mention, with Android TV as the interface, users are able to take advantage of all the benefits of Android TV apps. So those looking for what is presumed will be a more natural and easier to use interface that mixes up the use of live OTA TV with TV streaming apps, the Stream+ might not be a bad option to consider. 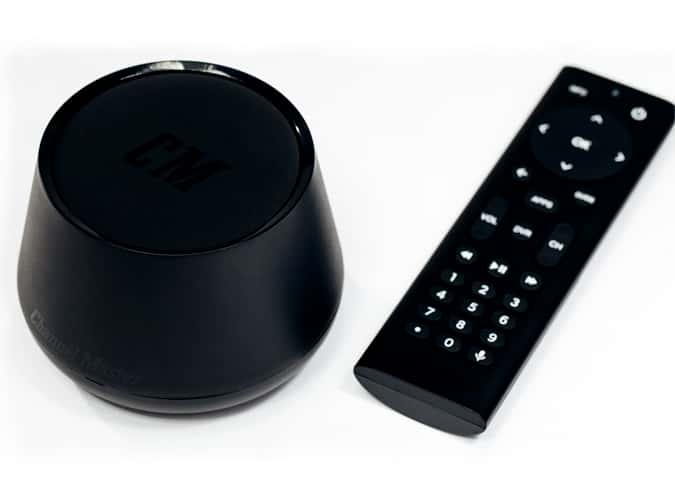 As for its design, while unique-looking it is not actually that unique at all. In fact, the design of the Stream+ is further adding to the notion this look is becoming the standard generic design for Android TV boxes moving forward. As its shape, look, and overall appearance is identical to other units that have come through during the past year and especially in international markets. Two such examples include the Foxtel Now box in Australia and the TIMvision Android TV digital decoder in Italy. So the Stream+ does seem to be further suggestion Android TV enthusiasts should expect more boxes boasting this identical design to come through. In either case, while generic, the form factor is designed to be fairly compact and the solid black coloring should fit in nicely with most home entertainment systems. As for the specs, the details are a little limited here so there is no mention of the RAM or storage, although the Stream+ is listed as powered by an ARM quad-core processor. In addition, 4K and HDR (including HDR10) support is listed, as is support for Dolby Digital and Dolby Digital+. The remote control is a voice-enabled remote, while the back of the device comes loaded with a HDMI port, an optical port, an Ethernet port, and a microSD card slot.

As mentioned, the Stream+ is currently listed with a $99 price tag attached although it should be pointed out that this seems to be an “introductory price” and therefore could rise when the device goes on general sale. Speaking of which, Channel Master is currently listing the “end of January” as when units will have shipped out to those who pre-order early. Should you buy the Stream+? Well, whether or not this is the right unit for you will likely depend on how much of an antenna type of person you are. However, at this price point, and thanks to its included dual tuners, this does have the potential to act as a good gateway device for those looking to ‘cut the cord’ for the first time.