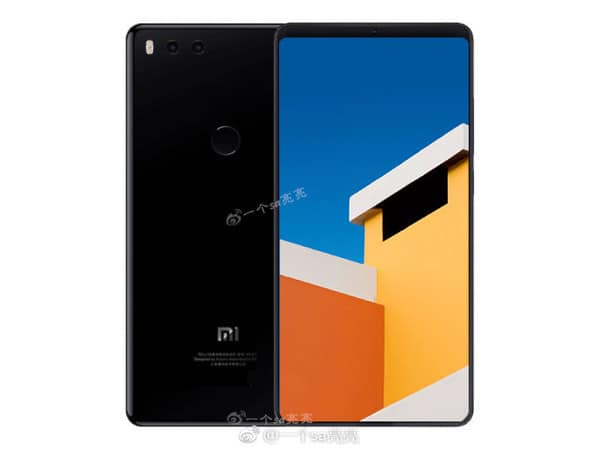 The Xiaomi Mi 7 had leaked quite a few times thus far, and a new render of the device has just popped up. If you take a look at the provided image above, you will see a device with extremely thin bezels, a dual camera setup on the back, and a rear-facing fingerprint scanner. A dual-LED flash is noticeable on this image as well, and so is the company’s logo which is placed on the back side of this smartphone.

As you can see, the bezels on this handset are basically non-existent, well, at least the phone’s side and bottom bezels, the top bezel is slightly thicker than the rest of them. The Galaxy S9 is actually expected to ship with such thin bezels, and if this leak is at all accurate, the Xiaomi Mi 7’s design may surprise us. This phone’s display sports rounded corners as well, so it’s in tune with the latest trends, and it seems like the phone is made out of metal. A render of the phone’s back surfaced last week, and even though it resembles this design, the two designs are definitely not identical. The same can be said for the leak of the phone’s back side that surfaced earlier today as well, it’s considerably different than what we’re seeing here, so the design of the Xiaomi Mi 7 still remains a mystery.

The Xiaomi Mi 7 is expected to launch at this year’s Mobile World Congress (MWC) in Barcelona which kicks off next month. The company had already confirmed that the phone will ship with the Snapdragon 845 SoC, and even though Xiaomi will make an appearance at this year’s MWC, the company still did not confirm if the Mi 7 will be announced in Barcelona or not. The Xiaomi Mi 6 was announced after MWC 2017, as Xiaomi did not participate at last year’s MWC, but the Mi 7 could land at MWC 2018, as the Mi 5 did back in 2016. Aside from the Snapdragon 845, the device is expected to ship with wireless charging, which probably means that we’ll see a glass back on the device. The Xiaomi Mi 7 will sport 6GB of RAM, at least, and MIUI 9 will ship on top of Android, probably Android Nougat, unless Xiaomi releases Android Oreo-based MIUI 9 by the time the Xiaomi Mi 7 arrives.