ASUS is seemingly preparing a new Android smartphone for release, according to a recent entry in the Wi-Fi Alliance database which shows that an ASUS handset bearing the model number “X00QD” has been certified earlier last week on January 26. The smartphone will presumably be a part of the upcoming ASUS ZenFone 5 series and judging by its Wi-Fi capabilities it should at least fit in the mid-range market segment, if not the upper end of the spectrum.

According to the WFA, the ASUS_X00QD runs Android 8.0 Oreo out of the box and takes advantage of Wi-Fi 802.11h a/b/g/n/ac connectivity, but other details remain uncovered. Nevertheless, the device could be one of the company’s upcoming models from the ZenFone 5 series and could be part of the same smartphone family as the unannounced ZenFone 5 Lite. The aforementioned device was leaked earlier this year in mid-January while bearing the model number “ZC600KL,” a 6-inch display as well as a chipset made by Qualcomm, so chances are that the ASUS_X00QD might do the same and employ a Snapdragon-branded processor just as well, though it remains to be seen whether it’s going to deliver similar levels of performance, or higher.

No other information was uncovered by the Wi-Fi Alliance certificate, however, the smartphone’s approval by the regulatory agency theoretically brings the device’s market debut one step closer to reality. The time is quite appropriate as well, since ASUS’ CEO, Jerry Shen, stated last year that the upcoming ZenFone 5 series will be officially introduced in March 2018. Having said that, and while not much else has been confirmed since, the ZenFone 5 lineup is now expected to be unveiled at Mobile World Congress in Barcelona, Spain, near the end of February or at the beginning of March. Like last year, the upcoming series will likely consist of several models covering a wide market range, some of which might have a bigger focus on photography. If the previous ZenFone 4 family is anything to go by then the upcoming series should include some models labeled as “Selfie” and/or “Max.” And given the current market trend, ASUS may also make the switch to a taller 18:9 aspect ratio for at least some of the upcoming models in its lineup. 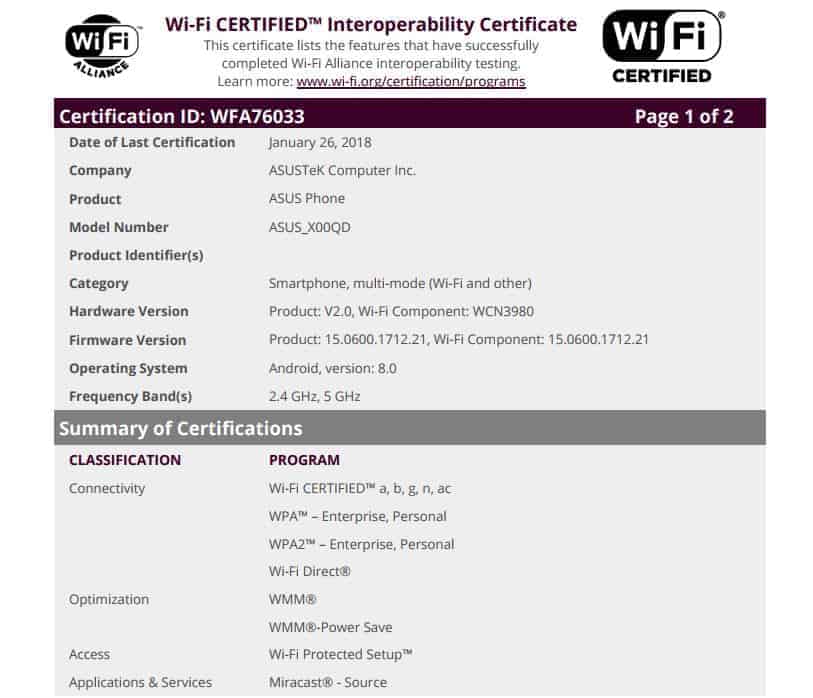