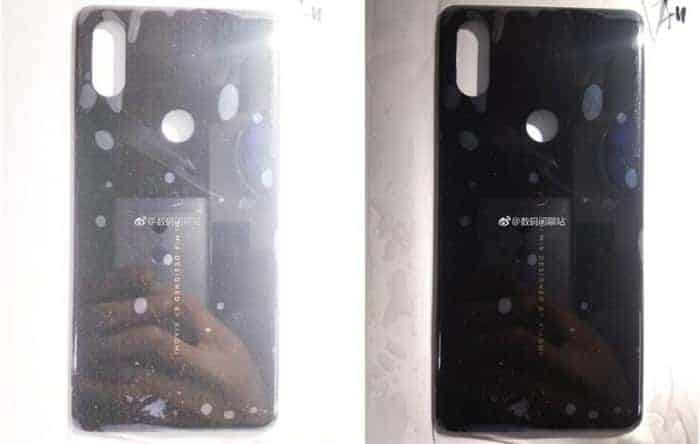 The Xiaomi Mi MIX 3 probably won't arrive until Q3 or Q4 next year, and yet the phone's alleged back cover and case popped up online quite recently. If you take a look at the gallery down below, you'll be able to see the phone's alleged back cover and case, and if these two are legit, the Mi MIX 3 will ship with a vertically aligned dual camera setup. Now, the case that leaked actually has three cutouts where the camera is expected to be placed, two of those are probably reserved for the camera, while one is there for an LED flash.

Both the back cover and case suggest that the Mi MIX 3 will sport a rear-facing fingerprint scanner, and it seems like the camera setup on the phone will protrude on the back a bit, at least if the leaked case is legit. This camera setup actually reminds us of the camera setup on the iPhone X, well, its placement does. That is more or less it, several Xiaomi Mi MIX 3 prototypes leaked recently, but we did not see that many leaks thus far, which is not exactly surprising considering that the device will not arrive for quite some time now, unless Xiaomi decides to launch it earlier in 2018, which is not that probable, as the Mi 7 and Mi 7 Plus are expected to arrive in March next year, at least according to the latest rumor that surfaced quite recently. Having said that, the Xiaomi Mi MIX 2 launched back in September, along with the Xiaomi Mi Note 3, so Xiaomi will probably introduce the third-gen Mi MIX phone in September 2018, or perhaps even in October.

The Xiaomi Mi MIX 3 is expected to trim down those bezels even further, the Mi MIX 2 reduced the 'chin' below the display quite a bit, and Mi MIX 3 will probably ship with an even thinner bottom bezel, though it's even possible that Xiaomi will remove it completely, we'll just have to wait and see what will happen. The Xiaomi Mi MIX 3 will ship with top-of-the-line specs, so you can expect it to sport the Snapdragon 845 SoC, along with 6GB / 8GB of RAM, while it will probably be made out of ceramic, at least partially.