New promotional materials for the Huawei Nova 2s have just been leaked, providing more information about the design of the smartphone. Based on the images, users will find the two front-facing cameras, the earpiece, and the additional sensors above the device’s display while the fingerprint scanner for securely unlocking the device is located below the screen. The right side of the handset contains both the power button and the volume rocker while the two rear cameras are placed on the back panel of the smartphone. Another image shows that the Nova 2s will likely be available in five color options, namely silver, red, black, blue, and pink.

On the other hand, the specifications of the Nova 2s have been detailed in a previous report. The Nova 2s will be powered by the Kirin 960 chipset, which is comprised of an octa-core 64-bit CPU with maximum clock speeds of 2.4GHz and the Mali-G71 MP8 GPU. This is the same chipset that powers some of Huawei’s more recent flagships, like the Huawei Mate 9 and the Huawei P10. The previous report also mentioned that the handset will have a 6-inch curved display with a resolution of 2160 by 1080 pixels and an aspect ratio of 18:9. The screen will have rounded corners, while the handset itself will sport a metal and glass construction. The smartphone will contain 6GB of RAM, although there is no word yet on the capacity of its internal flash storage. A USB Type-C port and a loudspeaker are both located at the bottom of the handset.

Even though the Nova 2s sports dual front-facing cameras, previous leaks only mentioned one 20-megapixel sensor. It is interesting to note that the promotional materials for the smartphone highlight the capabilities of the smartphone’s selfie cameras. Meanwhile, the device has two rear cameras equipped with one 16-megapixel sensor and one 20-megapixel sensor. The handset will also sport additional features like NFC and Hi-Fi audio support. It is expected that the device will ship with Android 8.0 Oreo pre-installed, although it is likely that the Huawei’s proprietary skin, EMUI 8.0, will run on top of Google’s operating system. It has been reported that the Huawei Nova 2s will be unveiled on December 7, at least in China, while other markets will likely get the handset later on. More details about the specification, pricing, and availability of the smartphone will likely be available by its launch. 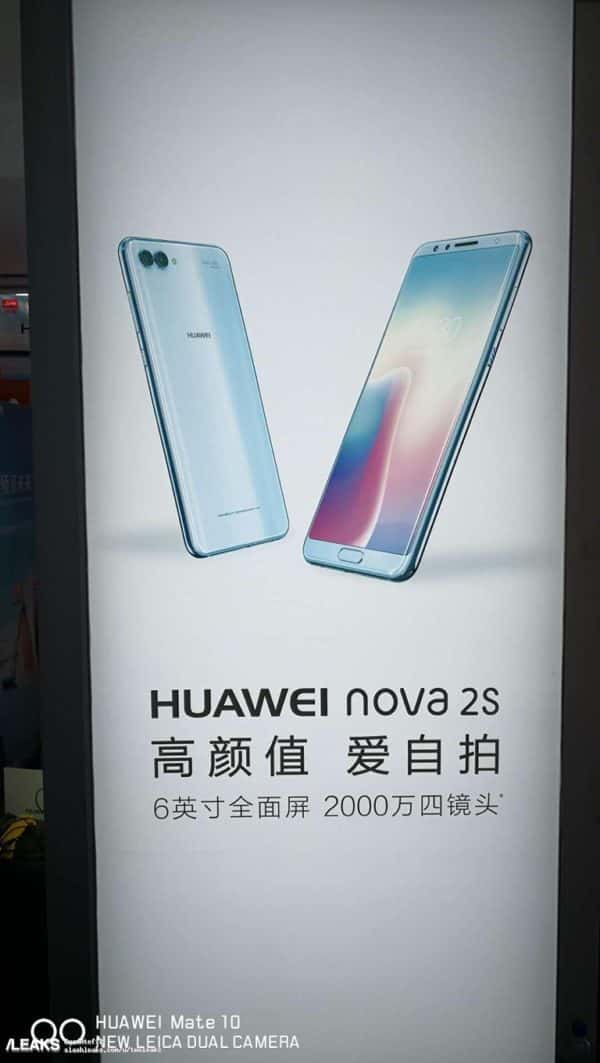