An unannounced Samsung Galaxy device with model number SM-G571F was recently spotted at the FCC and benchmarked on GFXBench, and it’s believed to be the next-generation Galaxy J5 Prime (2018). More information has now surfaced regarding the purported device, with a newly leaked spec sheet revealing what to expect in terms of hardware. With intensifying leaks and appearances on specialized websites, the smartphone could soon be ready to make its official debut as the latest mid-ranger in Samsung’s lineup of affordable devices. The specs on the leaked spec sheet mostly fall in line with the ones previously spotted on GFXBench. The device would come as the successor to the Galaxy J5 Prime with mode number SM-G570F.

Based on the newly leaked spec sheet, the purported Galaxy J5 Prime (2018) with model number SM-G571F will have a 5-inch display and an HD resolution of 1,280 x 820 pixels. It’s not a high resolution for a smartphone by today’s standards, which indicates that the handset will be a budget-friendly option. Other specs include an in-house Samsung Exynos 7570 octa-core processor paired with 3GB of RAM, which should suffice to handle tasks that are not too intensive. The device will further come with 16GB of internal storage space, with microSD support for additional storage of up to 128GB.

The purported Galaxy J5 Prime (2018) will also have a 13-megapixel main camera with LED flash, an 8-megapixel selfie camera on the front, a 2,500 mAh battery, a front-facing fingerprint scanner, and Android 7.1.1 Nougat on the software front. The previously leaked GFXBench specs for the Galaxy J5 Prime mentioned a 4.8-inch HD display, a 12-megapixel main camera, and 32GB of native storage space, 25GB of which would be available to users after the operating system and other pre-installed software take their share. No additional information is available at this point regarding when the Galaxy J5 Prime (2018) will be ready to hit the market, in which regions it will be available, or for how much. The smartphone could make its official debut early next year, but nothing is certain until Samsung makes a formal announcement, which means that some of the information could very well be different once that time comes. 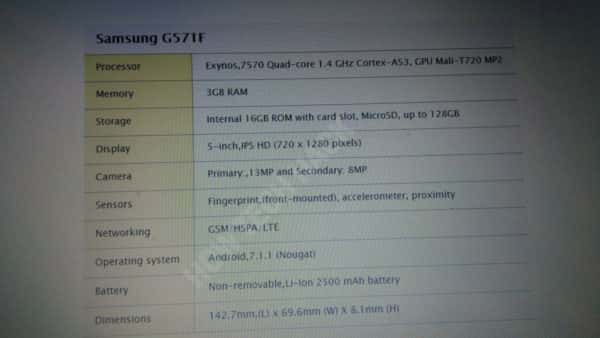