A new leak suggests the successor to the Xperia XZ1 will be yet another incremental update for the Xperia lineup. Sony has gained recognition for its dedication to their Omnibalance design language which originally debuted at CES 2013 with the original Sony Xperia Z. Now, nearly 5 years on, the company is still churning out devices with similar designs and, just like previous iterations, Sony’s next device is likely to be a minimal update over the previous device according to new information.

The device, which is known as the Sony H8216, looks set to once again stick with a 1080p panel, but the information does state that the size will be stretched to 5.5-inches. However, the actual size of the new device – expected to be called the Xperia XZ2 – is identical to that of its predecessor, at 148mm tall, 73.4mm wide and 7.4mm thick, meaning a taller screen aspect ratio is a possibility. The only apparant difference is in weight, with the Xperia XZ2 listed as weighing 156g, that’s one gram heavier than the Xperia XZ1. Regarding internal specifications, Qualcomm’s Snapdragon 845 is set to power the device and looks to be coupled with 4GB of RAM and 64GB of internal storage. Also, Sony appears to have increased the battery size significantly, with a 3130mAh power pack that supports Quick Charge. Moving on to the camera department, the Japanese company looks to have included a number of upgrades. The rear camera setup has been modified to include two 12-megapixel sensors, instead of the traditional single lens, while up front the Xperia XZ1’s 13-megapixel sensor is listed as having received a slight bump to 15-megapixel on the new device. In terms of software, the Xperia XZ2 looks set to come with Android 8.1 Oreo straight out of the box with Sony’s minimal overlay on top.

Sony is yet to confirm the existence of the device, but considering the company’s history of releasing upgrades pretty quickly, the Xperia XZ2 will likely make its debut at MWC 2018 alongside a successor to the Xperia XZ Premium. Nonetheless, it’s worth taking the leak with a grain of salt. After all, the size of the listed device remains identical to that of the company’s current flagship, yet the display and battery are significantly bigger and a dual-camera setup is also said to have been crammed into the same body. Another odd detail is the fact that the USB port is listed as microUSB, instead of USB Type-C. However, it is possible that the dimensions are simply a mistake. 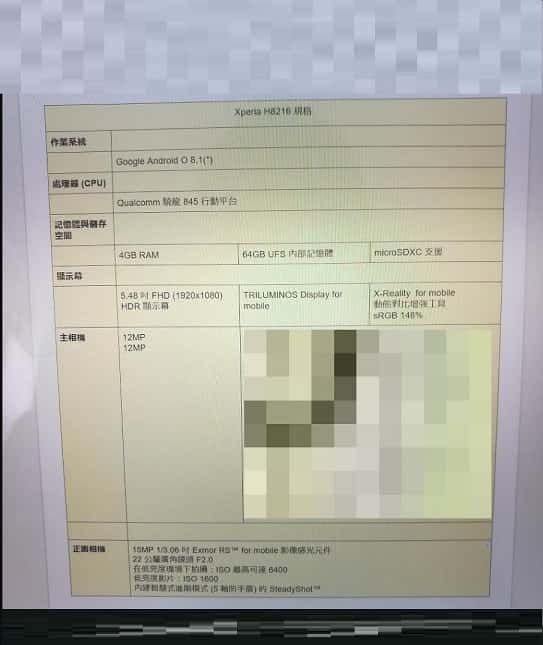