An upcoming Sony smartphone which was previously identified by the model number “H4233” has been recently linked with the Sony Xperia XA2 Ultra moniker in the Malaysian SIRIM database. The aforementioned model number was previously spotted in online benchmarks revealing several hardware characteristics, and according to the recent listing in Malaysia, the H4233 will launch globally as a direct successor to the Xperia XA1 Ultra introduced earlier this year.

The same listing also reveals that the device supports Wi-Fi 802.11 b/g/n/ac and Bluetooth connectivity, while seemingly offering dual-SIM capabilities. The smartphone was approved by the Malaysian regulatory agency earlier today on December 28, lending further credibility to the idea that it will be officially introduced early next year at Mobile World Congress, much like the original Xperia XA1 Ultra was announced in February 2017 at MWC. However, unlike this year’s model, the Xperia XA2 Ultra will reportedly abandon MediaTek’s silicon and adopt one of Qualcomm’s solutions instead, according to the previous Geekbench listing. The chipset comprises eight CPU cores clocked at up to 2.2GHz and an Adreno 508 graphics chip, and the only Qualcomm chipset that meets these specifications at the time of this writing is the Snapdragon 630 launched in the second quarter of 2017. The device should also come with 4GB of RAM and 64GB of on-board memory, and carry a 21-megapixel main camera as well as a 16-megapixel front-facing sensor, both of which are capable of recording videos in 4K resolution. Lastly, the Sony H4233 / Xperia XA2 Ultra should feature a 6-inch display with a resolution of 1920 by 1080 and run Android 8.0 Oreo out of the box, presumably under a custom Android skin.

No leaked pictures of the Sony Xperia XA2 Ultra exist at the moment, however, the Japanese OEM is expected to rethink its OmniBalance design language with its next year’s smartphone lineup and the handset in question could be one of the first to experience this change. Judging by the display resolution uncovered in GeekBench, the Xperia XA2 Ultra features a more conventional 16:9 aspect ratio which might go against the idea of a redesign, but on the other hand, there have been reports suggesting that Sony’s upcoming “Mirai” design language may stick with 16:9 panels despite promoting a more modern look. 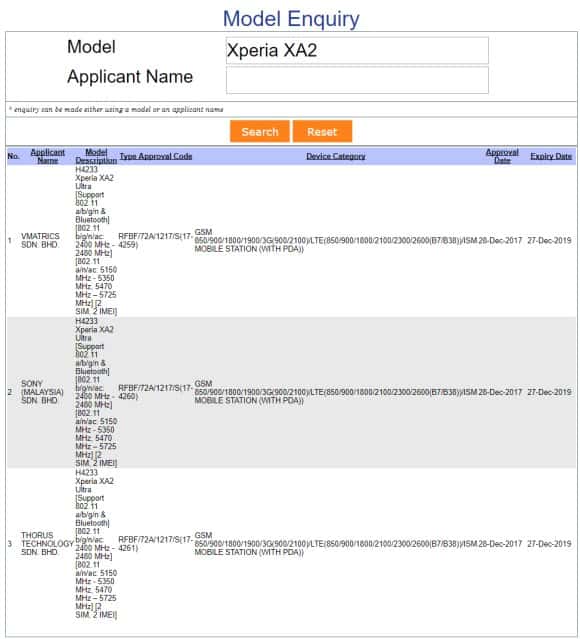