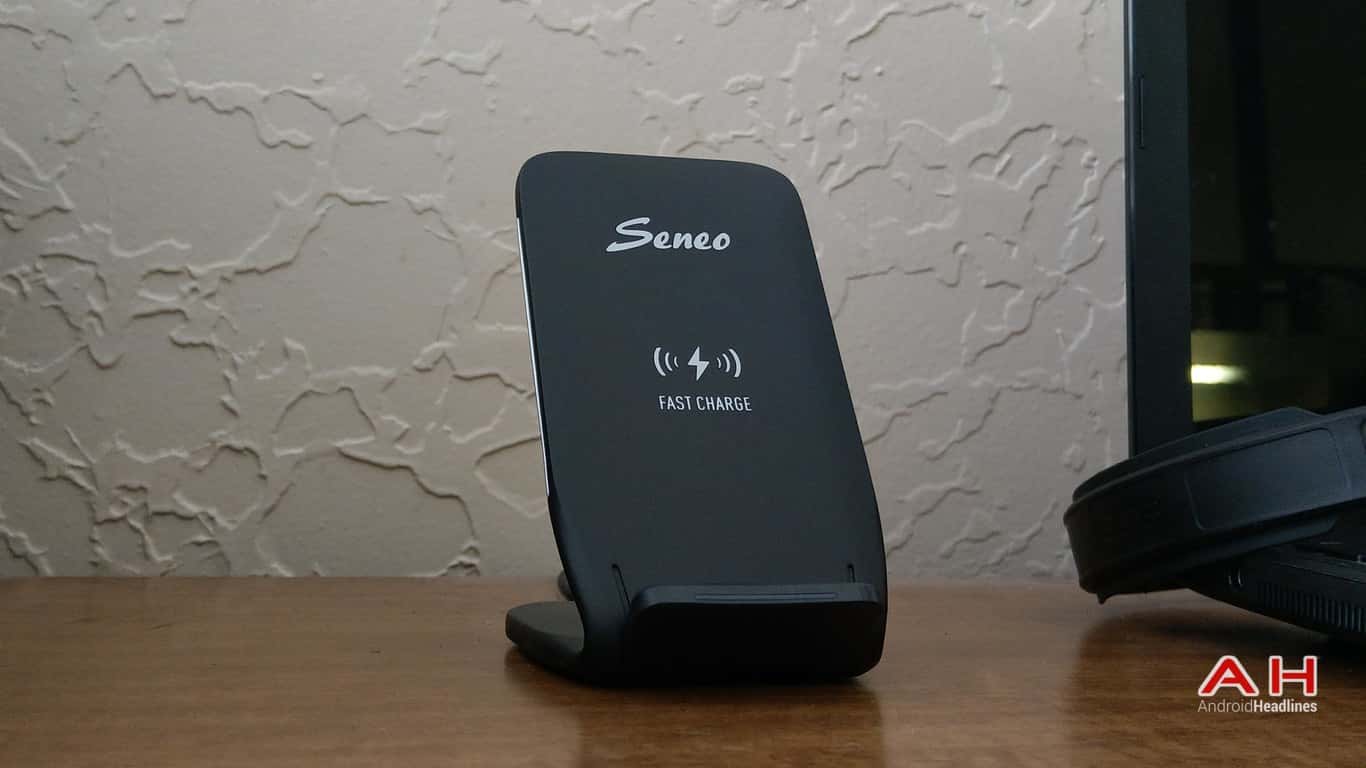 Seneo is a moderately prolific manufacturer, known for its mobile charging solutions, and now has a newer Qi wireless fast charger – selling under the model number SNPA094AB. With the product ordinarily retailing for around $70 but currently selling for around $24 on Amazon, it may be one of the least expensive wireless charging solutions available. Although fast charging may not work with every mobile device that supports wireless charging, this one does adhere to Qi standards. So it should work just fine with just about every device on the market that takes advantage of that standard, whether that's a Samsung, LG, or any other brand of device. However, it is worth noting that this charger is designed with Samsung in mind, so the quicker fast wireless charging won't be available to none-Samsung handsets.

As to what ships in the box, buyers can expect to see the Seneo wireless charging dock, a cable, and a short set of instructions for use. The cable, as might be expected, is of the fairly standard USB Type-C variety and there is no adapter box included with this charger. That caveat means users will need to either buy one or use one that they already have laying around. It is not recommended that this wireless charger is plugged in via a PC or laptop's USB ports, as it requires a throughput of 5V at 2A in order to function properly. However, being powered via USB Type-C also means that the power can be shared with devices that don't feature wireless charging but do have a USB Type-C port, in a pinch, simply by unplugging the cable from the dock and plugging it into the unsupported device. Meanwhile, the dock is quality built, as one would expect given the moderately high retail price tag for this model. It is primarily comprised of plastics, but that most likely down to the fact that metals aren't typically a good material to build these types of things out of since they deal with the wireless transmission of electricity. With that said, this charger certainly feels like it is a premium build nonetheless, despite how slim the overall design is.  There are also metal lines running down either side of the charger, as well, presumably acting as a heat sink since there are no fans to be found on this charging stand. Around the front of the device is written the words Senseo and Fast Charge, indicating where a mobile device should be placed for optimal charging. 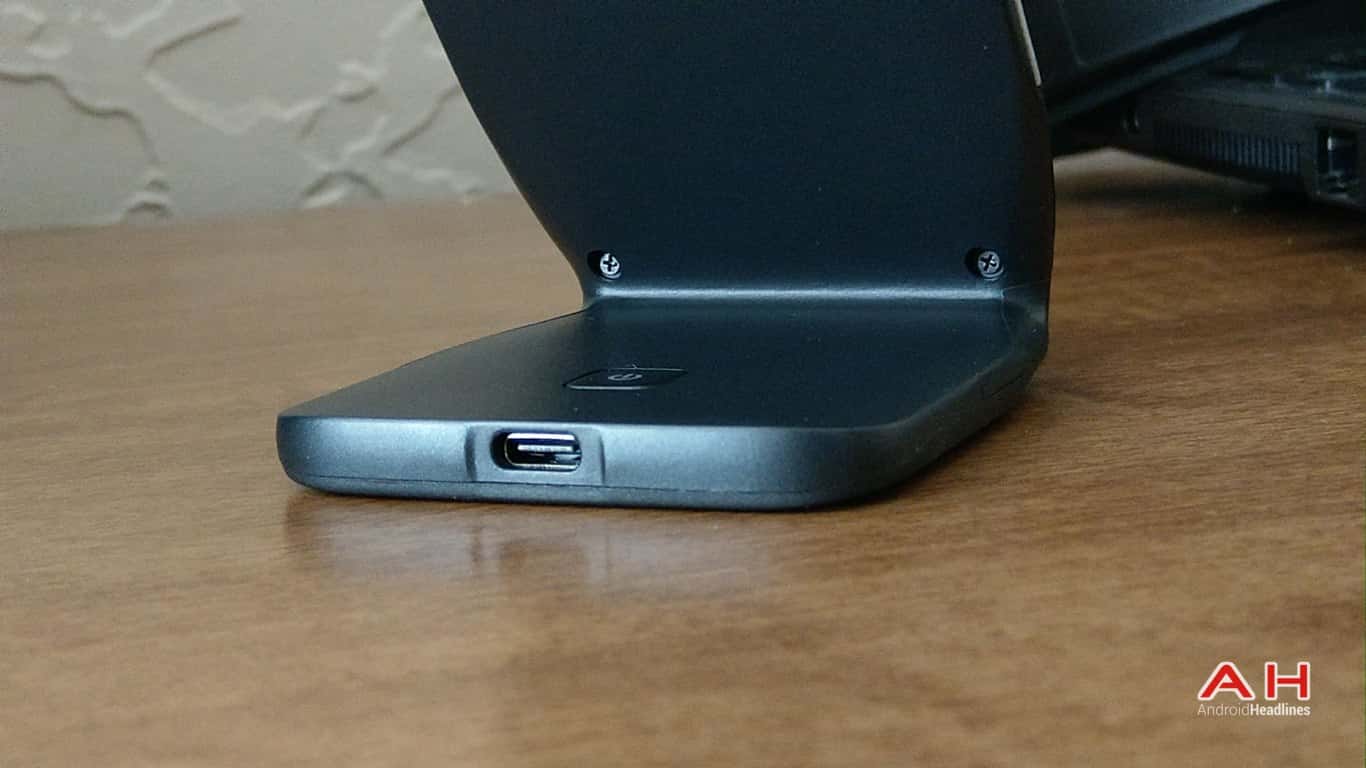 With a maximum output of 10W, this Seneo fast charger will charge at a distance of 8mm, and will even charge through many cases at up to 4mm. That was tested using an LG G6, both with no protective case and with a TPU rubber case. Seneo does note that charging with a case containing metal materials is not advisable. The charger is likely to not recognize a device placed inside of such a case as being wireless charging compatible, or it may cause damage to the device or charger. It also most likely won't charge very well, if at all, through thicker cases such as those made by Otterbox. Bearing that in mind, Seneo's Fast Wireless Charger does relatively well even with a slim-fitting case on the device and 4mm is actually quite thick by most standards, at around half the thickness of an LG G6. That doesn't mean it will work with any or every case and charging a device wirelessly with any case will increase the amount of time a device must be on the charger to reach a full battery. However, it should work well with most cases, which is a definite bonus when using a wireless charger. This wireless fast charger also works in two orientations, both with the phone placed vertically on the stand and when it is placed horizontally. Of course, it will not charge at full speed, regardless of what device is placed on it, in a landscape orientation. For those who prefer to set their smartphone up as an alarm clock overnight in landscape orientation, that should prove useful since it will still charge the device. 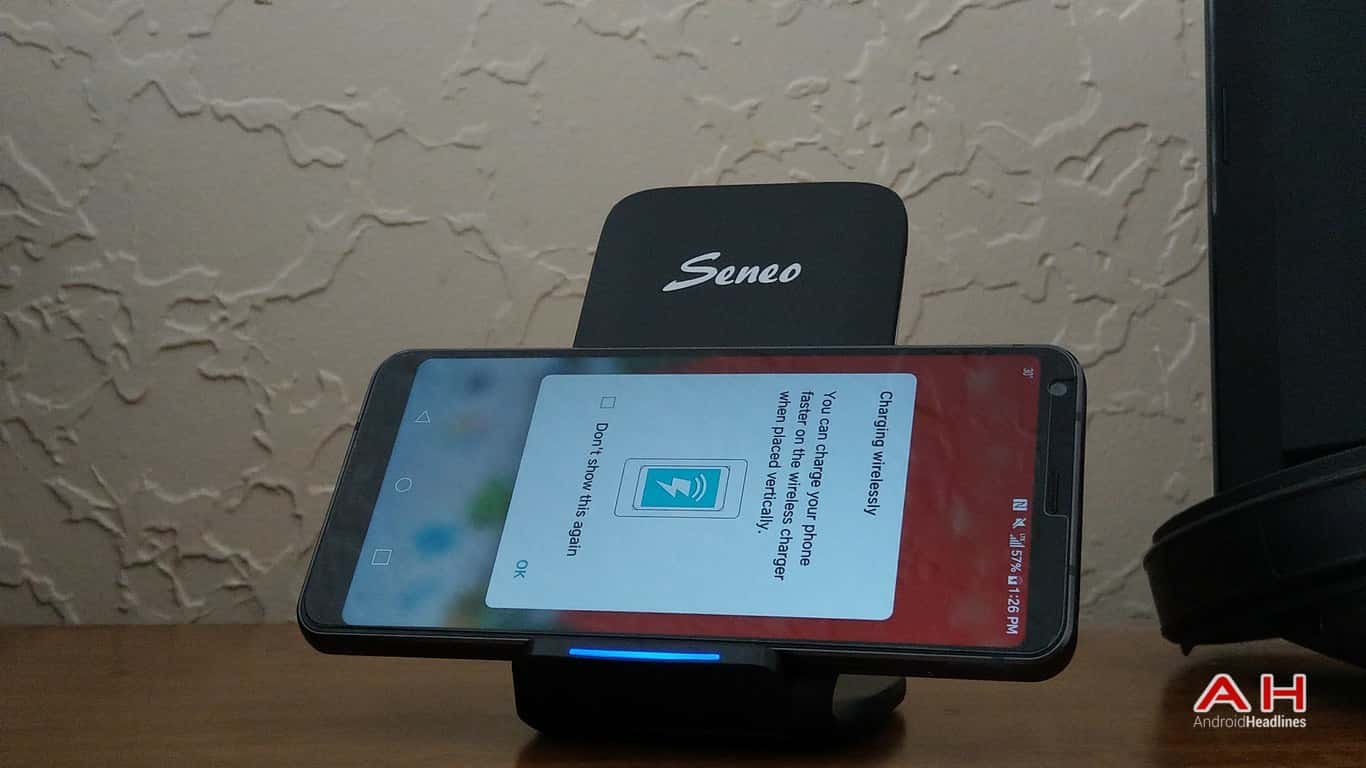 As mentioned above, for Samsung owners, this charging stand from Seneo does offer fast charging capabilities. It will, of course, still be somewhat slower than typical fast charging via a given device's USB cable and stock adapter. That means owners of Samsung's Galaxy Note 5, Galaxy S6 Edge Plus, or Galaxy Note 8, as well as variants of the Galaxy S8 or Galaxy S7, will be able to take advantage of Fast Charging – which can be as much as 1.6 times as fast as ordinary wireless charging. There is also at least one caveat to that. For fast charging to work, a Quick Charge 2.0-compatible adapter box or newer is required while normal wireless charging speeds can be achieved with any adapter box with a throughput of 5V at 2A – as mentioned earlier. That shouldn't present too much of a problem for too many users, as the newer devices with fast wireless charging available also ship with a Qualcomm's Snapdragon chipsets and will include Quick Charge capabilities in their adapters. All other Qi-compatible devices will charge at a much slower rate, with around 3 to 4 hours required to completely charge the 3300 mAh battery in our LG G6.

Users will be able to tell their device is charging properly, thanks to a light bar running across the front of the charger. It blinks red if a device is not charging properly thanks to positioning or if its an unsupported device. Meanwhile, it turns blue and stays solid while the device is charging. Unfortunately, the light bar represents yet another caveat for owners of devices not made by Samsung since it will stay blue even when it is fully charged for smartphones from other manufacturers. For Samsung devices, the light will turn green once the device hits full charge. That's not necessarily a deal breaker, but it is definitely worth bearing in mind before purchasing. Meanwhile, this wireless fast charger also has an off button, located around the back of the device on the upward-facing surface designed to prop up the charger. That's likely to prove invaluable for those that would like to use it as a stand to free up their hands even when their device isn't in need of extra power.

Bearing all of the caveats outlined above in mind, the Seneo Fast Wireless Charger is, for now, probably among the most high-value options available on the market. It has a solid build quality, does not become too hot when charging, can be used in both portrait and landscape orientations, has a dedicated power button for use as a stand when a device's battery level is not an issue and can charge a supported device through a wide variety of protective cases. Moreover, it features much fast charging for devices that support fast wireless charging. Aside from the fact that it does not ship with its own adapter plug and that the full charge indicator only works with Samsung's devices, this charging stand should suit the needs of just about anybody looking to leave behind some of the hassles caused by charging via plugs and wires.