Samsung is rolling out a new firmware update for the Gear S3 smartwatch which is supposed to fix its issues with poor battery life. The problem was seemingly introduced with the latest Tizen 3.0 update according to numerous user reports, and Samsung is now apparently addressing the problem with a relatively small software update weighing around 20MB. However, it’s important to note that as of this writing, the update seems to be available in Canada, though other countries will presumably follow soon.

Tizen 3.0 for the Samsung Gear S3 introduced a number of new features through the Value Pack update, though not everything was perfect and a bug affecting the wearable’s battery life also managed to avoid detection on the part of Samsung’s QA testers. That was until earlier this month when users have begun reporting on the problem, prompting Samsung to respond in a somewhat quick manner. No other features or additions are mentioned in the changelog, which essentially makes the new update a hotfix targeting only a single problem. The fix is distributed as any other update and users can refer to the Samsung Gear phone application in order to trigger the installation process. As usual, make sure the smartwatch has enough battery charge to last throughout the update or trigger the upgrade while the wearable is recharging. There’s still no official word on when the package will land in other parts of the world. Nevertheless, if all goes well and the update fixes the targeted problem, it’s most likely that its availability will gradually expand over the coming weeks.

As for Samsung Gear S3 users who may have skipped the Tizen 3.0 and Value Pack update to avoid battery life issues, this latest release is full of new features, ranging from the addition of a new fitness-oriented widget, to the ability to remotely control TVs and Gear VR headsets connected to the same smartphone as the wearable. Furthermore, the update includes new quick message replies and also adds more functions to the rotating bezel surrounding the circular display. If you’ve already applied it to your smartwatch, keep an eye out for the latest patch targeting battery performance as it may arrive at any moment. 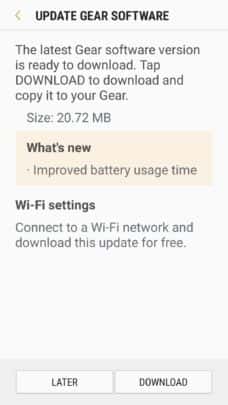