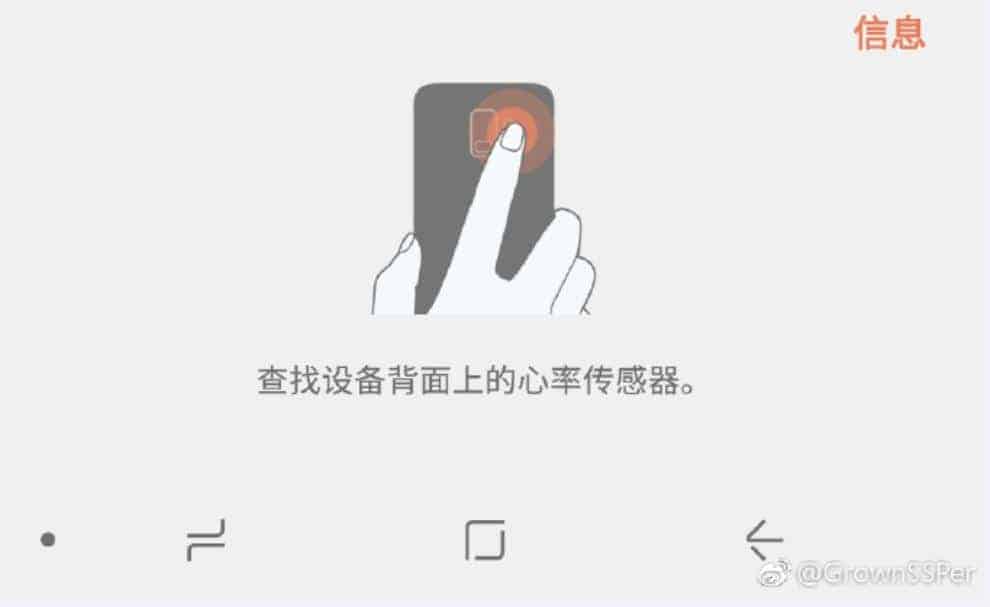 A screenshot depicting what's said to be the S Health Android app running on the Galaxy S9 leaked online earlier today, having been shared by one industry insider from China. The image that can be seen below explains the use of the phone's heart rate monitor which appears to be located to the right of its rear-mounted camera setup, whereas the fingerprint sensor is depicted as residing below the imaging system. The same screenshot also gives more credence to recent reports claiming that while Samsung will be equipping the Galaxy S9 and Galaxy S9 Plus with two rear cameras, the setup won't look like the one seen on the Galaxy Note 8 and will instead entail two vertically arranged sensors.

Given how the same heart rate monitor tutorial screen provides a relatively accurate sketch of its host device when the S Health app is running on the Galaxy S7, Galaxy S8, and the Galaxy Note 8, it's likely that the service will do the same on the Galaxy S9 and Galaxy S9 Plus. Based on that assumption, the newly leaked screenshot indicates that Samsung's upcoming Android flagships won't be as blocky as the Galaxy Note 8 and will instead feature more rounded corners closer to the aesthetic of the Galaxy S8 series than the company's latest S Pen-equipped phablet. The credibility of the leak remains somewhat dubious, with its source having a mixed track record, though the information suggested by the screenshot is in line with previous rumors about Samsung's next premium mobile offering.

The Galaxy S9 and Galaxy S9 Plus are expected to be incremental upgrades over their predecessors and shouldn't debut any radical changes to Samsung's product design philosophy, albeit the differences between the two are said to be more pronounced than the ones separating the Galaxy S8 from the Galaxy S8 Plus. According to recent reports, the larger device will sport 6GB of RAM as opposed to 4GB and may be the only one that will be offered in a variant with Samsung's new 512GB flash memory chip the company just started mass-producing earlier this week. The smaller handset may also miss out on a dual-camera setup, some insiders previously suggested, though that still isn't believed to be the most realistic scenario. The Galaxy S9 lineup is expected to debut in late winter or early spring, presumably around the time MWC 2018 takes place, but Samsung is more likely to hold a separate product launch even than announce the devices at the Barcelona, Spain-based trade show.