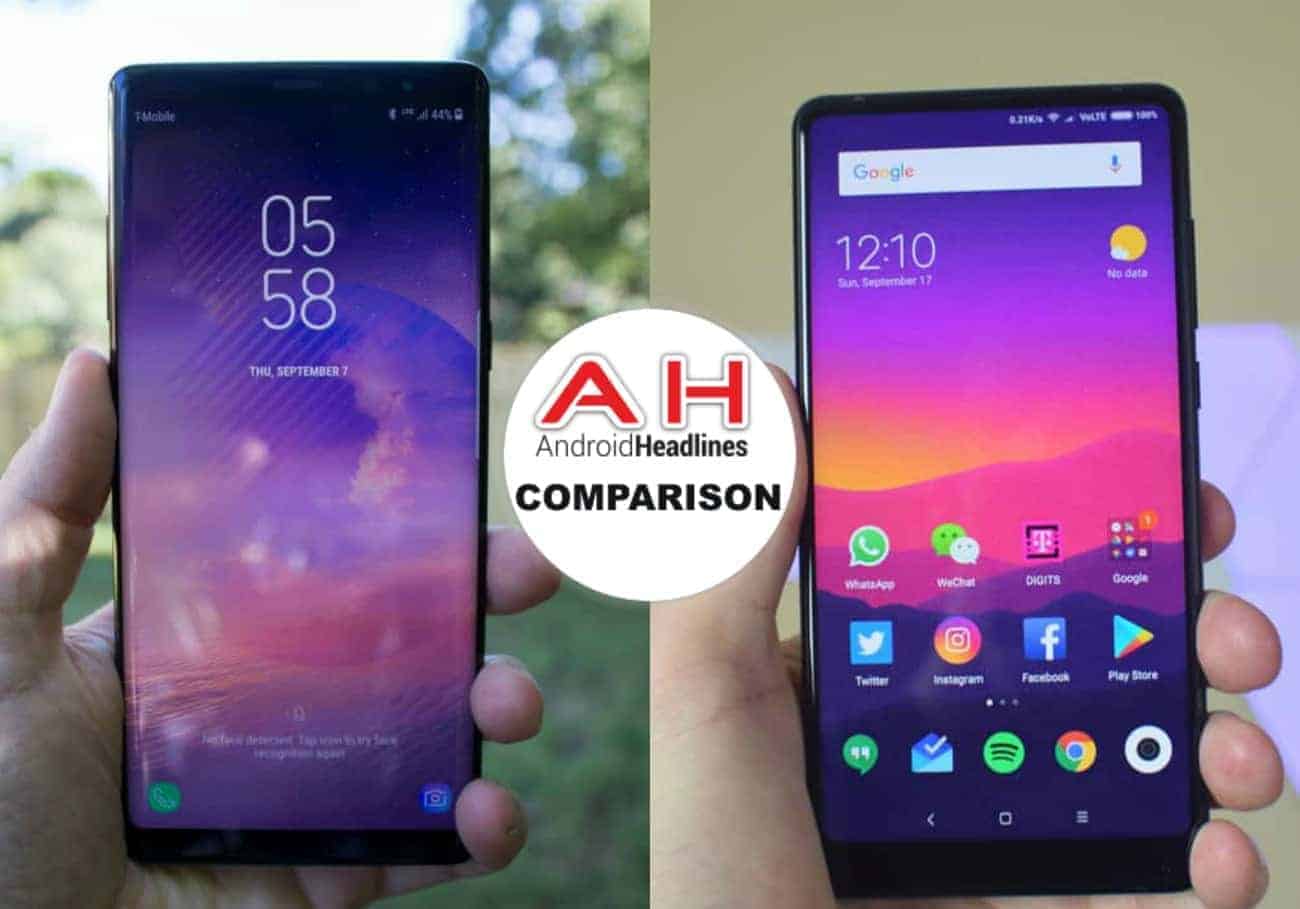 Do we have a good one for you today – the Samsung Galaxy Note 8 goes up against the Xiaomi Mi Mix 2. Both of these devices are beautiful to look at, incorporate a nearly bezel-less display, use the same SoC, the same amount of RAM, and each has a fantastic build quality. The Galaxy Note 8 boasts an all-glass design with a metal frame, while the Mi Mix 2 has a Gorilla Glass 4 front, a metal frame, and a ceramic back. Both devices are expensive, with the Note 8 going for around $960 – with many specials being run to cut that price down – and the international version of the Mi Mix 2 tipping the scales at about $615. So, is the Mi MIX 2 a flagship that can rival the other bezel-less devices out there, like the LG V30, and of course, the Galaxy Note 8? Is the Galaxy Note 8 worth the extra money? We hope to answer these questions and more in this article. Before we look at each individual device, let's see what they both have in common.

Please take a careful look at the detailed specifications comparison chart below and here you will see just how these two great devices stack up against one another. After that, we will look at each model in greater depth and point out some of its pros and cons. From all of this information, we will try to determine the winner based on its specs and the overall execution of design and functionalities. 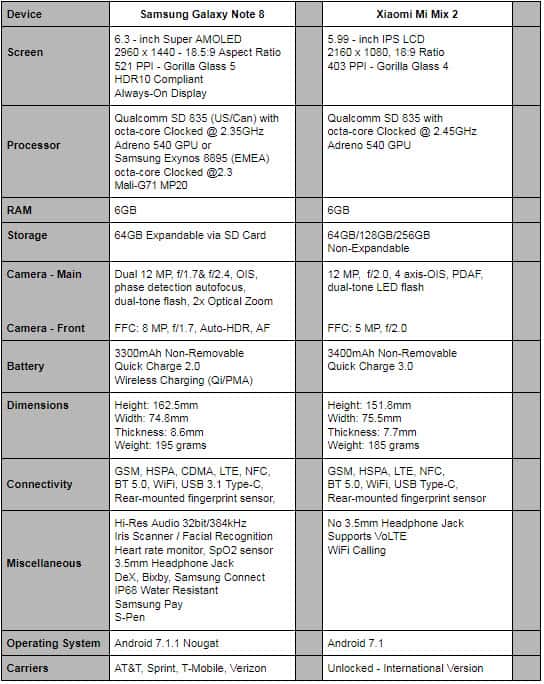 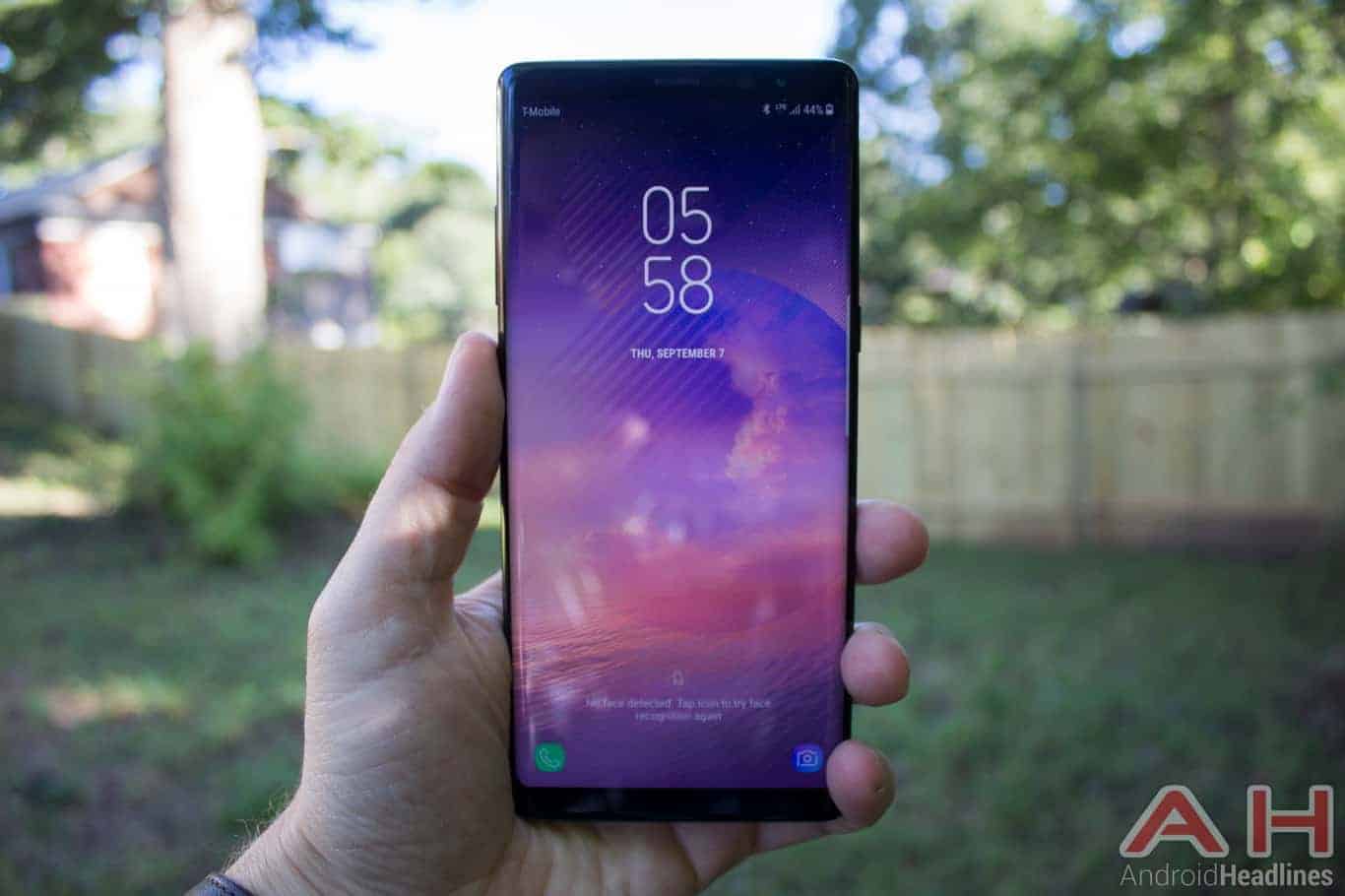 Not many will dispute the fact that the Samsung Galaxy Note 8 is one of the most beautiful and feature-packed phones available – yes, it is expensive at $960, but it is in a class of its own. Samsung's Infinity Display eliminates any side bezels and physical system buttons, and very small top and bottom bezels round out its looks. In an effort to keep users from putting their finger on the camera lens, Samsung moved the flash in between the camera lens and the fingerprint sensor – it helps, but it still needs a better arrangement. The user also has several other options for unlocking the phone – an iris scan, facial recognition, or the old-fashioned PIN/pattern method when all else fails. Samsung made the S Pen and software more productive and easier to use on the Galaxy Note 8. A very nice overall package if you need all of the features the Galaxy Note 8 provides.

After the Galaxy Note 7 fiasco, Samsung made some major changes to the Galaxy Note 8 that started with the display – it increased its size from 5.7 inches to 6.3 inches, changed the aspect ratio from 16:9 to 18.5:9, and adopted a look with minimal bezels. The phablet has a QHD+ resolution of 2960 x 1440 pixels that amounts to 521 pixels per inch (PPI). When your Galaxy Note 8 arrives, it will have its resolution default set to an FHD+ (2220 x 1080) to help save battery life. You simply need to go into the display settings to increase it to the QHD+ resolution. Samsung included its 'always-on' display that makes it easier and quicker for the user to check their notifications and ultimately save battery life by avoiding repeatedly waking up the handset.

The Galaxy Note 8 offers two processors – the US models use Qualcomm's Snapdragon 835 octa-core processor with a quad-core cluster clocked at 1.9GHz and another quad-core configuration clocked at 2.35GHz, paired with the Adreno 540 GPU. For EMEA countries, Samsung uses its excellent Exynos 8895 octa-core SoC clocked at 2.3GHz which ships with the Mali-G71 MP20 GPU. Both processors use Samsung's new 10nm FinFET process node. The Galaxy Note 8 packs a full 6GB of LPDDR4 RAM, ensuring fast and smooth operation and ease of multitasking. It has 64GB of memory expandable via a microSD card by up to 256GB. The non-removable 3,300mAh battery easily makes it through a day even when using the QHD+ setting. When you do need to charge the Galaxy Note 8, it features Samsung's Adaptive Fast Charging and Quick Wireless Charging for both Qi and PMA formats.

Samsung finally fulfilled the prophecy of a dual-camera smartphone – a rumor going around for the past two years. Its first attempt is good, but a monochrome sensor on the secondary camera would make it more interesting. The Galaxy Note 8 comes with dual 12-megapixel cameras and an f/1.7 lens (f/2.4 on the secondary sensor), PDAF, a dual-tone LED flash, auto-HDR, OIS, and 2X optical zoom. You can use a digital zoom as high as 10X by pinching the screen. The primary camera handles most of your photo shots, while the secondary camera comes into play if the user wants to create photos with a bokeh effect – Samsung recently updated its 'live focus' through a software upgrade to improve its usefulness. Samsung uses an 8-megapixel front-facing camera (FFC) with a large f/1.7 aperture, auto-HDR, and even provides autofocus and is great for selfies and video calls.

As with most Samsung devices, this one has so many features that most users will never even use them all. Look at the DeX Station (an optional purchase) that will allow you to interface the Galaxy Note 8 with a monitor, keyboard, and a mouse to give you a near-desktop experience. Another option is Samsung Connect that allows you to control Samsung's appliances. Samsung is developing its own personal assistant, Bixby, which seems to get better with each update. The Galaxy Note 8 carries Samsung's popular heart rate monitor and oxygen saturation sensor – a useful feature even for a non-athlete. When you get a Samsung device, you get access to Android Pay, but also Samsung Pay, which opens up even more possibilities for mobile payments. The Galaxy Note 8 series is IP68 certified against dust and water even with its S Pen silo. Speaking of the S Pen, it is a truly unique feature that sets the Galaxy Note 8 apart from other smartphones. Samsung improves both the S Pen and the software every year – the Galaxy Note 8 makes the S Pen more productive and easier to use. It arrives with Android 7.1.1 Nougat, measures 162.5 x 74.8 x 8.6 mm, and weighs in at a hefty 195 grams. It is available in Midnight Black, Orchid Grey, Maple Gold, or Deep Sea Blue, depending on where you are located. The Galaxy Note 8 will cost about $960 outright and is available for purchase from just about everywhere. We must take 'note' that there are many deals out there to make it much cheaper. 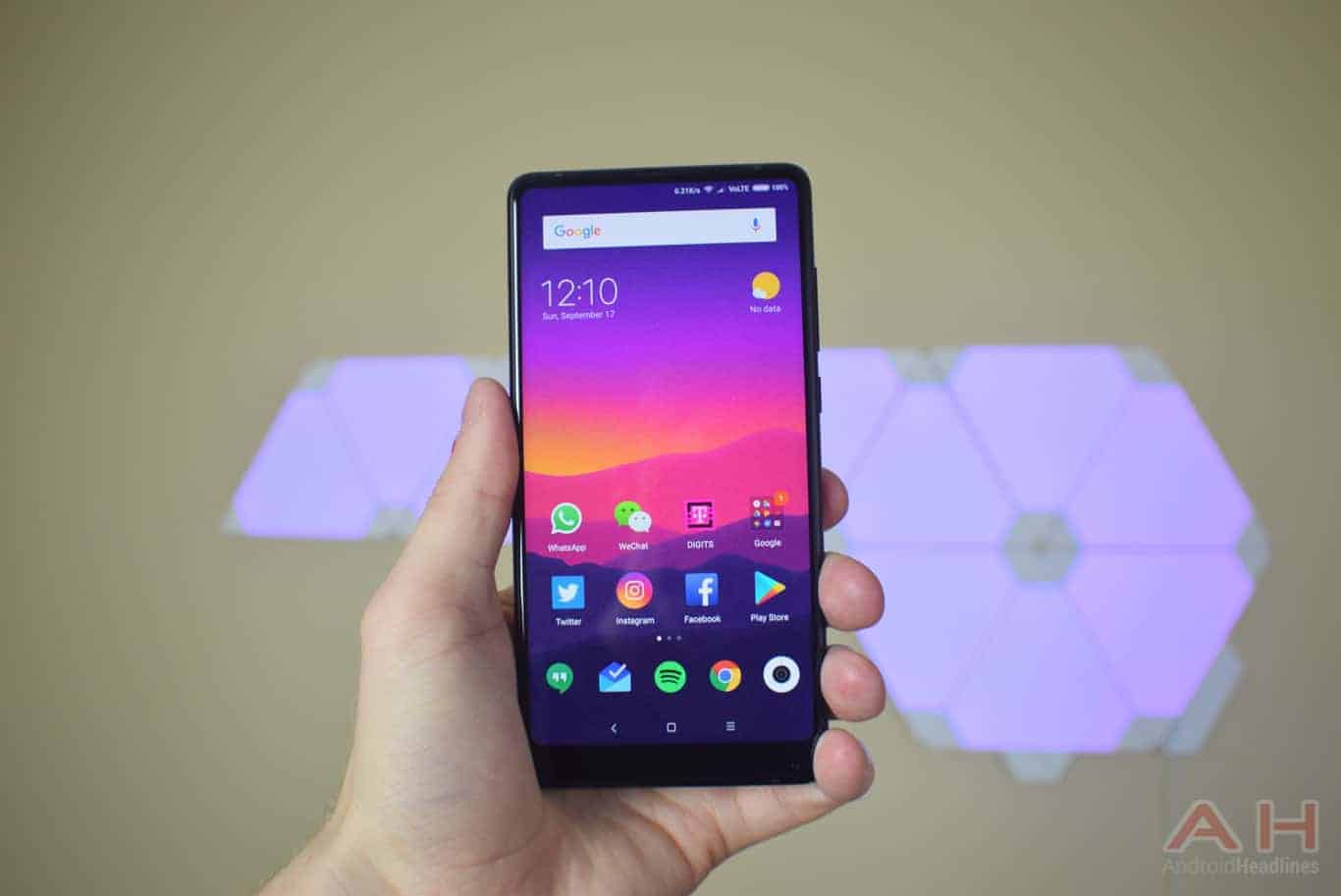 While there is no arguing that the Mi Mix 2 is a beautiful-looking device, it still has nothing over on the dual-curved display found on the Galaxy Note 8. It has near bezel-less sides and a really small top bezel and a larger bottom bezel which houses a front-facing camera. It has a ceramic back and a metal chassis. It sports a great single camera, a good display for an LCD, and excellent battery life. Xiaomi still does not offer any form of waterproofing, and took the headphone jack away. Inside, Xiaomi used the same processor found in the Galaxy Note 8 and many other flagships – the Snapdragon 835 – and packed it with 6GB of RAM. That's all a lot for just $615 but the device must be purchased via GearBest.

Xiaomi included a 5.99-inch LCD display with its usual FHD+ resolution of 2160 x 1080 pixels that translates to a decent 403 PPI. This is enough resolution to make the display look fine, but it would help more if it were AMOLED rather than LCD. The auto brightness works well to brighten the display only when needed to help save battery life. There is not a secondary notification display of any sort. Xiaomi did jump the Mi Mix 2 to the 18:9 aspect ratio for a better entertainment and multitasking experience.

The Mi Mix 2 is packing a Snapdragon 835 octa-core processor with one quad-core cluster clocked at 1.9GHz and another quad-core configuration clocked at 2.45GHz. It has a full 6GB of LPDDR4 RAM and a base of 64GB of non-expandable memory, although you can purchase a 128GB or 256GB model with extra cash. The non-removable 3,400mAh battery will easily make it through the day and then some. When you do need to charge the Mi Mix 2, it features Quick Charge 3.0.

Xiaomi resisted the temptation to include a dual-camera setup in its latest Android flagsip. While the camera app is simple and much like other Xiaomi smartphones, that includes a manual setting for the user to have complete control over the shot. The OEM did improve the 12-megapixel sensor by using a Sony IMX386 module which takes very good shots. It has an f/2.0 lens, 4-axis OIS, PDAF, and a dual-tone LED flash. The secondary camera is a 5-megapixel unit with an f/2.0 lens for selfies and video chatting. It has HDR capabilities, but no auto-HDR.

The Xiaomi Mi Mix 2 does not include many extra features – there's no S-Pen, no heart rate monitor, no IP68 rating, no smart assistant, no 3.5mm headphone jack, and no expandable storage. It is a solid, no-frills device with a nice physical size, good display, a great camera, and a large battery. It arrives with Android 7.1.1 Nougat, measures 151.8 x 75.5 x 7.7 mm, and weighs in at a hefty 185 grams. It is available in a wide assortment of colors as long as your choice is Black or White. It will cost you about $615 outright and is available for online purchase from GearBest. 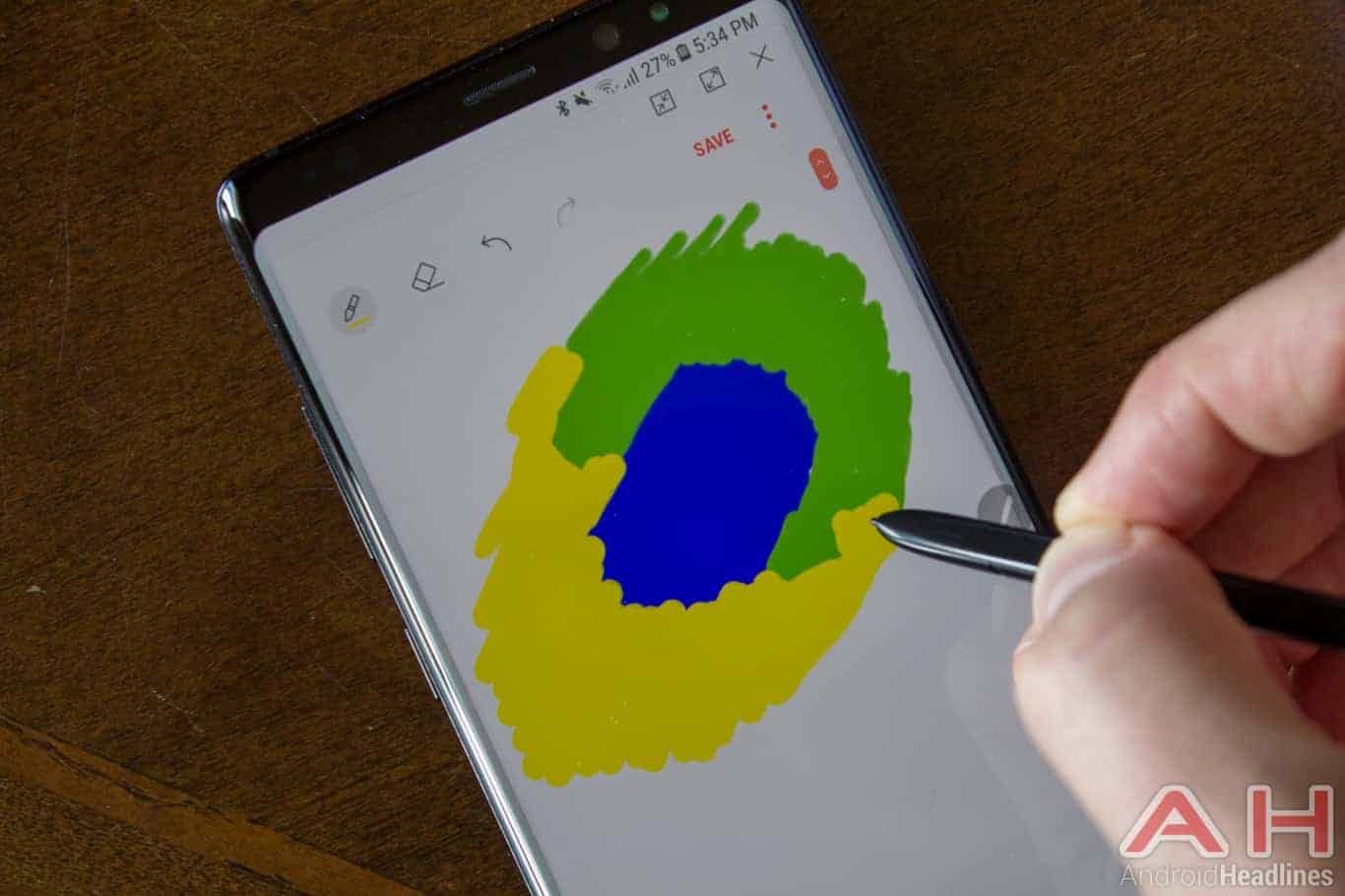 I had to chose the Samsung Galaxy Note 8 as it is clearly the more technologically and feature-laden device. However, if you can get your hands on the Xiaomi Mi Mix 2 and do not need the extras that the Galaxy Note 8 offers, you can save yourself a lot of money by going with the Mi Mix 2.

The Galaxy Note 8 has the better display – it is larger, has a better resolution, is of the always-on variety, and uses a stellar Super AMOLED panel. It also has the ability to expand its memory via a microSD card. It offers dual cameras and a larger, more sophisticated secondary camera. The battery may be 100mAh smaller, but the Galaxy Note 8 offers quick wireless charging. The Galaxy Note 8 has Hi-Res Audio, a 3.5mm headphone jack, an iris scanner, facial recognition, IP68 water resistance, a heart rate monitor, SpO2 sensor, Samsung Pay, Bixby Assistant, Samsung Connect – and most importantly, the S-Pen and its excellent software. It is readily available on all major US networks.

The Xiaomi Mi Mix 2 is a gorgeous device when it comes to looks and build quality. It has a decent-sized display – if only FHD+ and LCD – and while you can buy more internal memory, there are no means to expand the initial 64GB configuration. It has a solid, albeit single-lens setup, and a poorer secondary camera with fewer features. The battery is 100mAh larger than the one found in the Galaxy Note 8 but does not offer wireless charging. It does support VoLTE and WiFi Calling (as does the Galaxy Note 8) but has no 3.5mm headphone jack nor an S Pen.

Buy The Samsung Galaxy Note 8 Buy The Xiaomi Mi MIX 2
Trusted By Millions
Independent, Expert Android News You Can Trust, Since 2010
Publishing More Android Than Anyone Else
18
Today
116
This Week
608
This Month
3120
This Year
104599
All Time
Advertisement