The Galaxy S9 is Samsung’s upcoming flagship, and the device’s partial specs have just surfaced. The Galaxy S9 is not expected to arrive for another couple of months, it will probably launch during the Mobile World Congress (MWC) in Barcelona next year, or Samsung may opt to host a separate event after MWC, like it did last year. The Galaxy S9 is expected to sport a similar design to the Galaxy S8, though truth be told, we haven’t really seen that many leaks of the phone thus far, at least not legit ones.

Now, in terms of specs, a new image leaked containing some Galaxy S9 spec info, though take this info with a grain of salt, of course. The provided image does not really share all that much info, but it does say that the phone will sport a 5.77-inch display, compared to a 5.8-inch panel that the Galaxy S8 arrived with. In addition to that, you’ll also notice that the Snapdragon 845 is mentioned in this image, which is Qualcomm’s upcoming flagship processor. Now, January 2018 is also mentioned in this image, and that could indicate the arrival timeframe for the Galaxy S8, though it’s unlikely it will be announced next month, even though some reports did suggest that Samsung may be looking to push the device out sooner. In any case, in the provided image, you will also be able to notice that the phone will offer 4G LTE connectivity, Wi-Fi, and so on, though that is a given.

Now, the Galaxy S9 will probably be made out of metal and glass, just like its predecessor. The device will almost certainly ship with a rear-facing fingerprint scanner, though Samsung will, hopefully, opt for a more convenient place to put that fingerprint scanner this time around. Some rumors were suggesting that we’ll see an in-display fingerprint scanner in the Galaxy S9, but that almost certainly will not happen as such tech will not be ready until the second half of next year. The Galaxy S9 will include 4GB or 6GB of RAM on the inside, and chances are it will sport a QHD+ Super AMOLED Infinity display, just like its predecessor. The phone will probably utilize two cameras on its back, and its display will be curved on the sides. 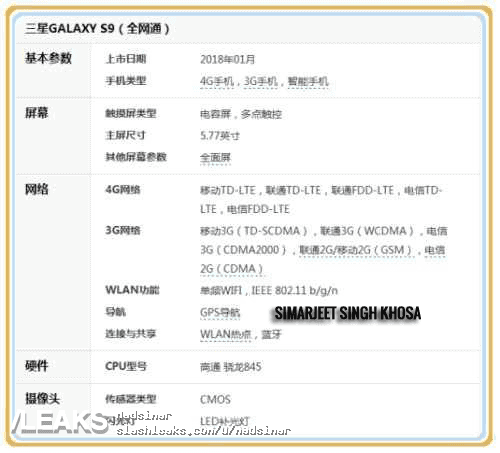