The OPPO R13 had surfaced quite recently, and now the phone’s specifications have popped up as well. This new leak actually shows off the ‘About Phone’ section of the phone’s settings menu, it seems, and according to the info that is provided, the device will ship with Android 8.1 Oreo, with OPPO’s ColorOS 4.0 skin installed on top of it. This kind of makes sense as ColorOS 3.2 was launched along with the OPPO R11s and R11s Plus, so a jump to ColorOS 4.0 for Android Oreo makes sense.

In addition to the software information, the leaked screenshot claims that the device will ship with 4GB of RAM and 64GB of native storage, out of which you’ll have 45GB for personal use when you power on the device. We do not know what SoC will fuel this smartphone just yet, but an octa-core chip is listed in the screenshot, and based on the other info presented in this image (baseband), it’s quite obvious this is one of MediaTek’s processors, which is quite odd, actually. OPPO has a tendency of using Qualcomm’s chips in its OPPO R-branded smartphones, so either this info is fake, or the company plans to switch the R series of devices to MediaTek’s chips, though it’s probably the former. That being said, the alleged OPPO R13 image surfaced at the end of last month, and it showed off a phone which resembles the iPhone X quite a bit. The device’s back side sports a dual camera setup with an LED flash in between those two cameras, just like on the iPhone X, and the phone sports really thin bezels, and it also resembles the front side of the iPhone X, though based on the leaked image we were unable to deduct whether the notch is there or not.

The leaked image of the phone was not exactly all that convincing, but who knows, it may be legit, we’ll just have to wait and see what will happen, though the OPPO R13 is not expected to launch until mid-2018, unless OPPO decides to announce that phone sooner, of course. The leaked image also suggested that Blue and White variants of the phone will also be available, in addition to the Black model that surfaced. 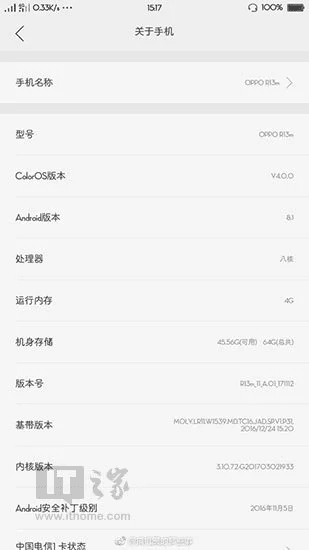