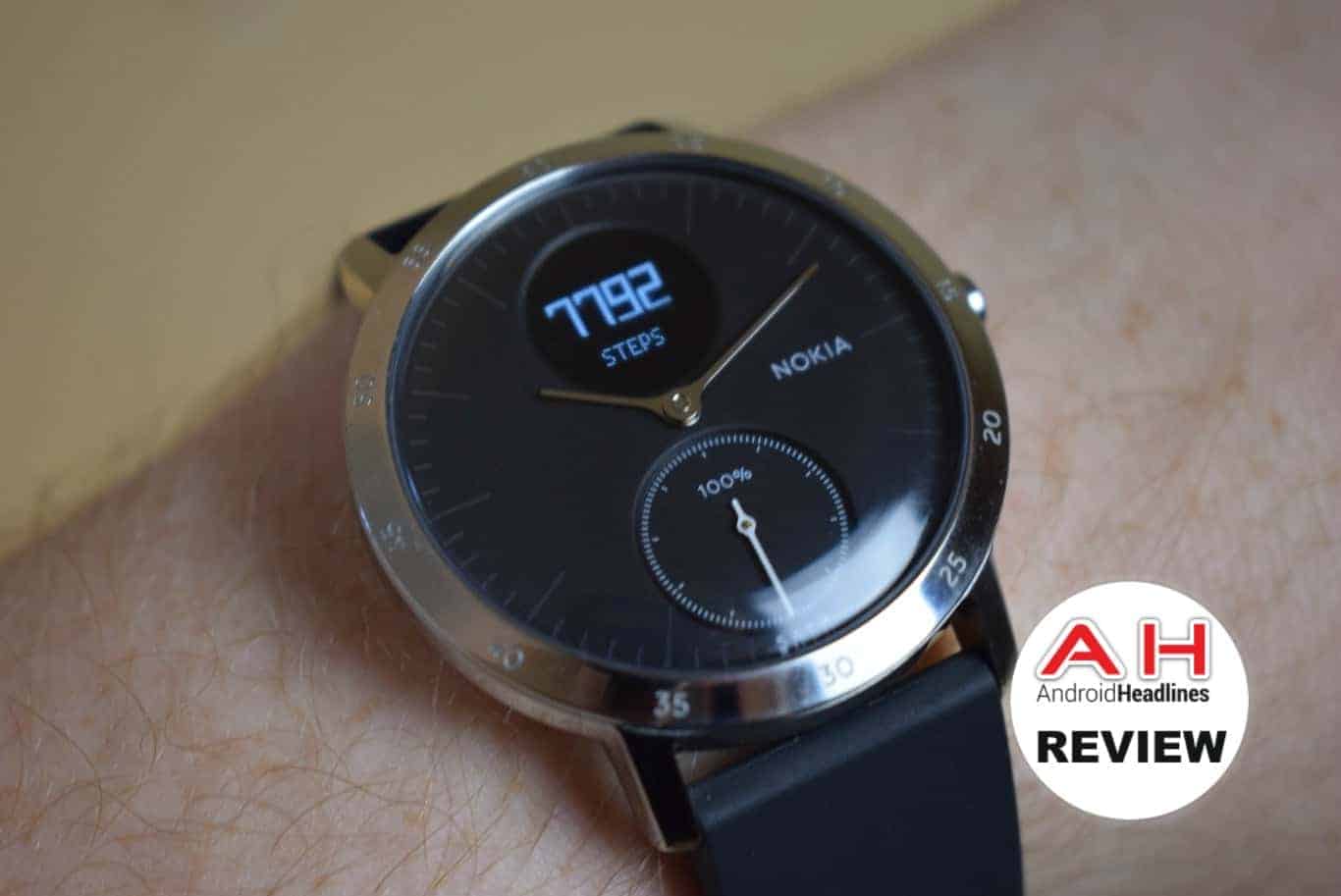 The era of the Hybrid Watch has begun, and Nokia’s Steel HR is the best one available right now

Nokia completed its acquisition of Withings back in 2016, and has spent the majority of 2017 rereleasing Withings’ products with Nokia branding, and even redesigned the Withings app, and renamed it ‘Nokia Healthmate’. So the Nokia Health division has had a pretty busy 2017, and now it has just released the Nokia Steel HR, which isn’t really much different than the Withings Steel HR, but there are a few differences here. This is Nokia’s big flagship activity tracker, and it’s a pretty interesting one. But how well does it fare in the already very competitive fitness tracking space? Let’s find out. 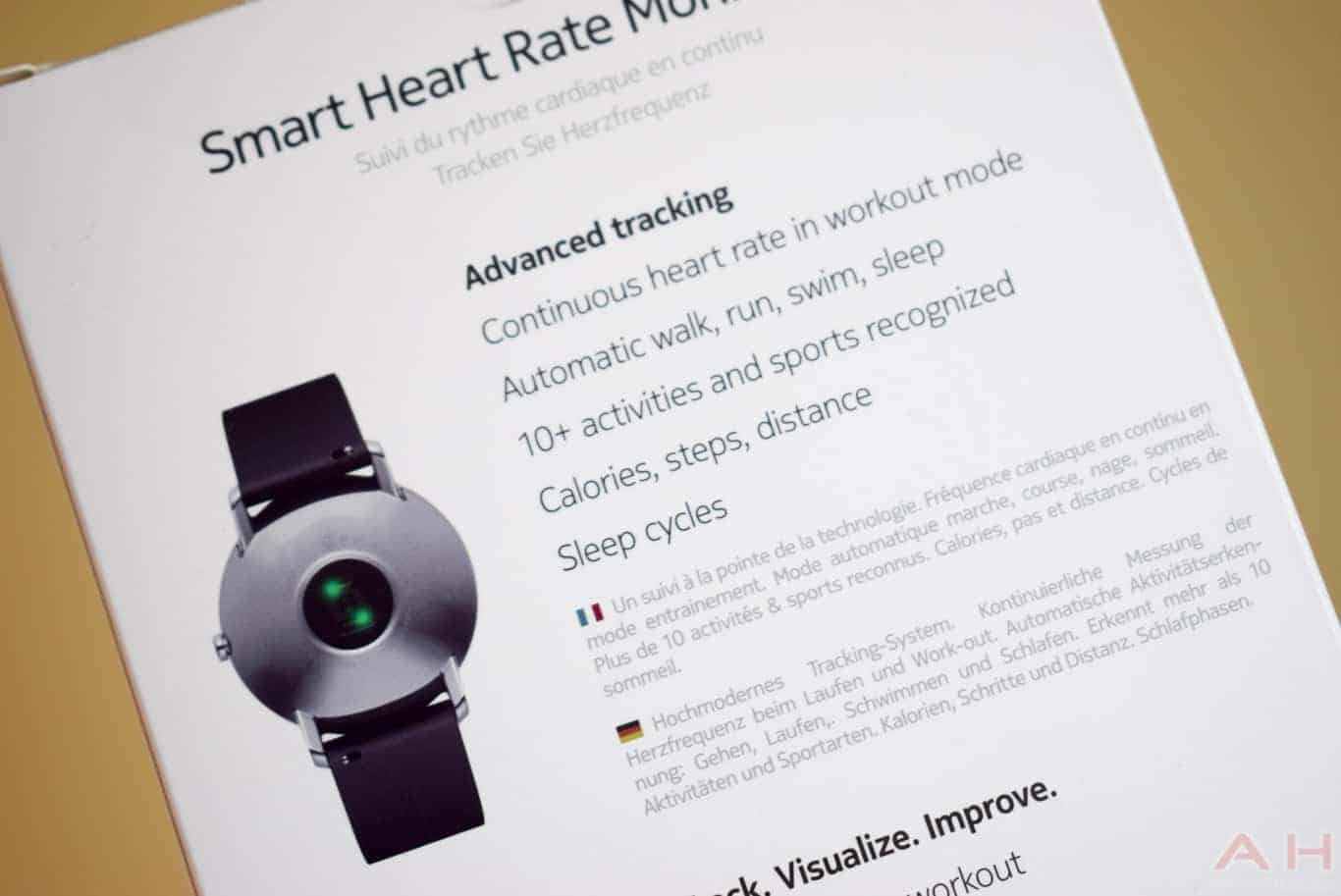 Nokia has two models of the Steel HR, the only real difference between the two is the size of the actual watch and then the wrist strap. So the smaller one is a 36mm watch, with a 18mm band and then the larger 40mm has a 20mm band. Both of these are 13mm thick. Otherwise, these fitness trackers are identical. The Steel HR connects using Bluetooth, and it does support Bluetooth Low Energy, in fact the company lists it as a requirement. And this is so that it doesn’t eat up a lot of your phones battery. The app works with Android smartphones running Android 5.0 or later, and iPhones/iPads/iPod Touches with iOS 8 or later. Nokia doesn’t note how large of a battery is inside, but does note that it will last about 25 days with a 20 day reserve mode that will only track activity and show the time (so no heart rate monitoring).

Now, as a feature that appears to be a big deal recently for fitness trackers, the Nokia Steel HR does support swim tracking, and is rated at 5ATM (or up to 165 feet of water). Outside of swimming, the Nokia Steel HR can also track your heart rate, steps, distance, calories, and sleep. It can also detect and track other workouts, which we’ll talk about more in the activity tracking section of this review. Finally, for sensors, the Steel HR has a heart rate infrared sensor, a day & night motion sensor, high precision MEMS 3-axis accelerometer and low power consumption. 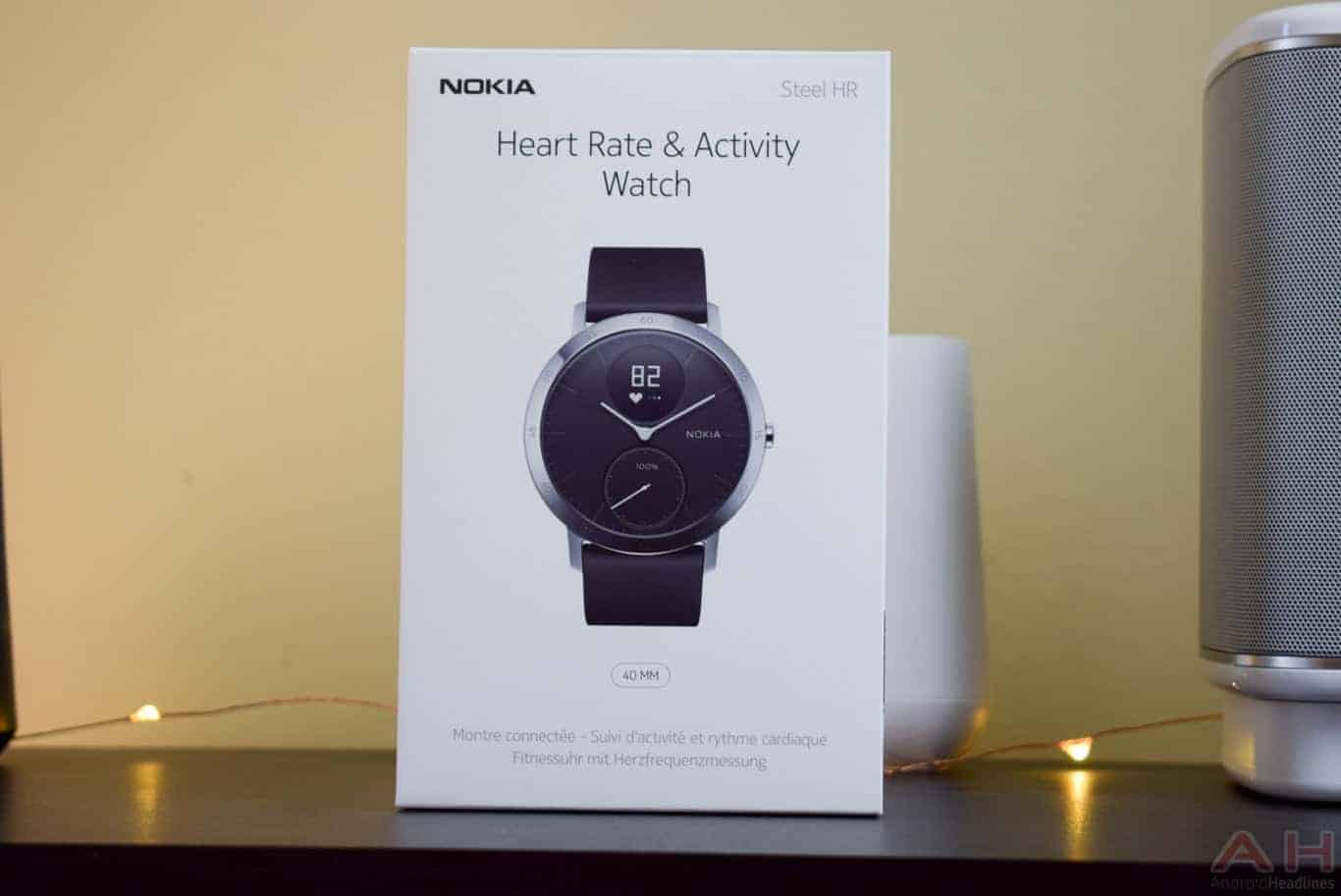 Nokia includes the Steel HR with one silicon strap – which is going to be black – in the box. There is also the charging cradle, as well as paperwork that is in multiple languages and that’s about it. To get things started, you’ll need to download the Nokia Healthmate app from the Google Play Store or Apple App Store, and it’s free to download and use. 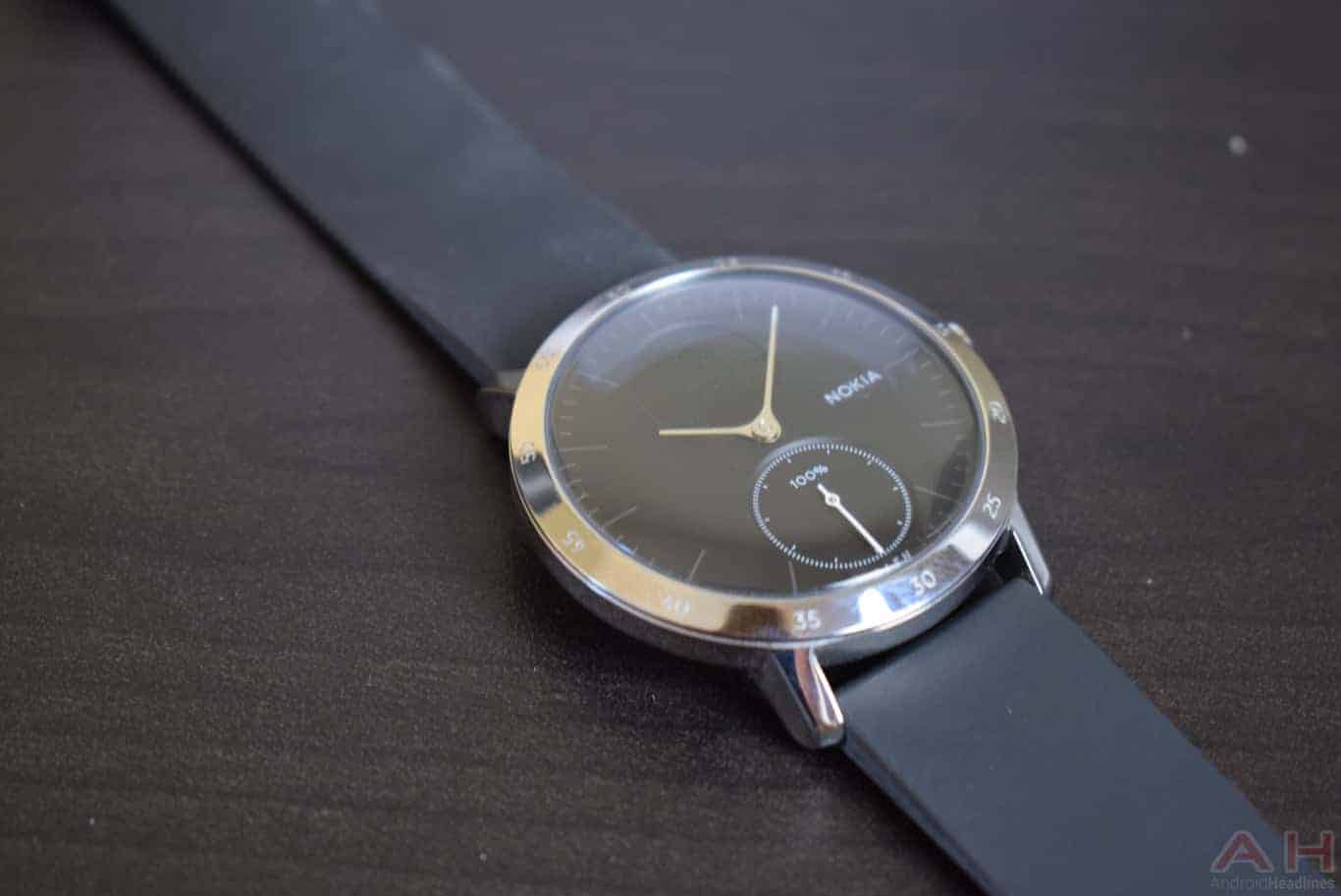 To the untrained eye, the Nokia Steel HR is going to look like a traditional watch. It doesn’t have a big display like the Gear S3 or another smartwatch, it has a pretty small round display that only shows your vitals in white. The circle towards the bottom of the watch shows how close you are to your goal for the day. So this is more of a hybrid watch and fitness tracker, which are also becoming popular these days. But this gives those that want a regular watch that does also track their activity, a good option to choose from. The casing on the Steel HR is still aluminum, like you’d expect. It doesn’t seem to scratch as easily as the Withings version did, so this might have a newer, tougher aluminum on board. This also comes with a silicon strap, which doesn’t really work well with a “traditional watch”, but it does work well with activity tracking. Especially if you work out several times a week or more. A leather strap, while available, won’t be great for using the Steel HR to track your swimming, since leather doesn’t do well when wet. Nokia does sell replacement straps for the Steel HR, two are leather, two are woven and then 6 different colored silicon straps. At the time of publishing this review, the 36mm has more options for straps then the 40mm (remember, they use different strap sizes).

Underneath the watch, you’ll find the heart rate monitor and assorted other sensors. There is also the charging ports here. Now Nokia does use a proprietary charger for the Steel HR, and that’s quite common with fitness trackers (and even most Bluetooth sport earbuds) these days. And the charging cradle actually works really well. It has a lip all around it, so that the cradle really does cradle the Steel HR in the charger, so you won’t need to worry about the Steel HR slipping off of the contacts and not charging. That is definitely a good thing, as that has happened many times with other Fitbit trackers I’ve used. Nokia has a single button on the Steel HR here which is used to toggle through the different vitals recorded on the Steel HR for that day. Like the date/time, steps taken, calories burned, etc.

The hardware is identical to the Withings Steel HR, which is not surprising, as there wasn’t really much that needed to change there. Withings already had a really good fitness tracker, and Nokia didn’t need to do much to rerelease it after the acquisition. There’s really not much to complain about when it comes to the hardware on the Steel HR, as it really checks all of the usual boxes. 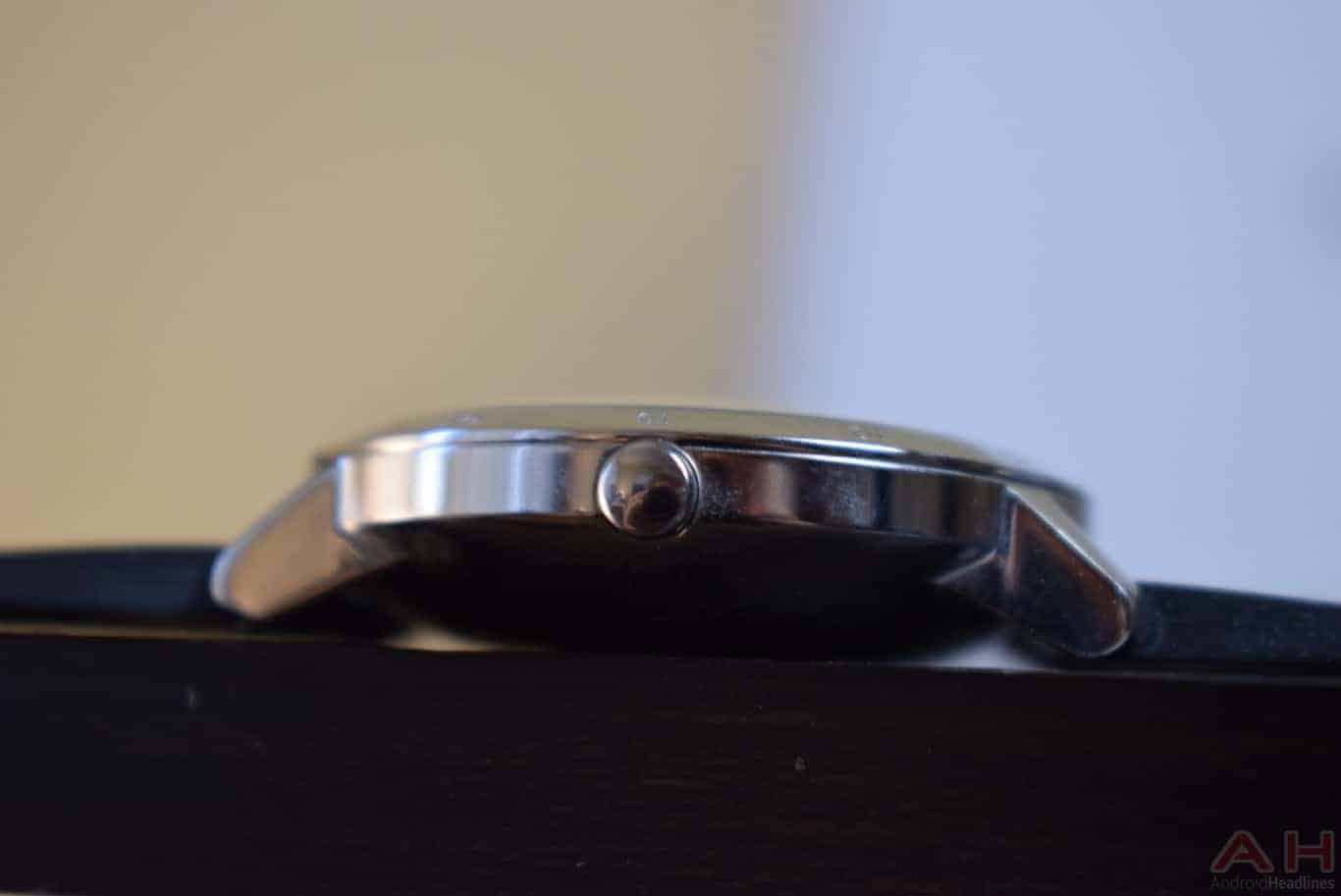 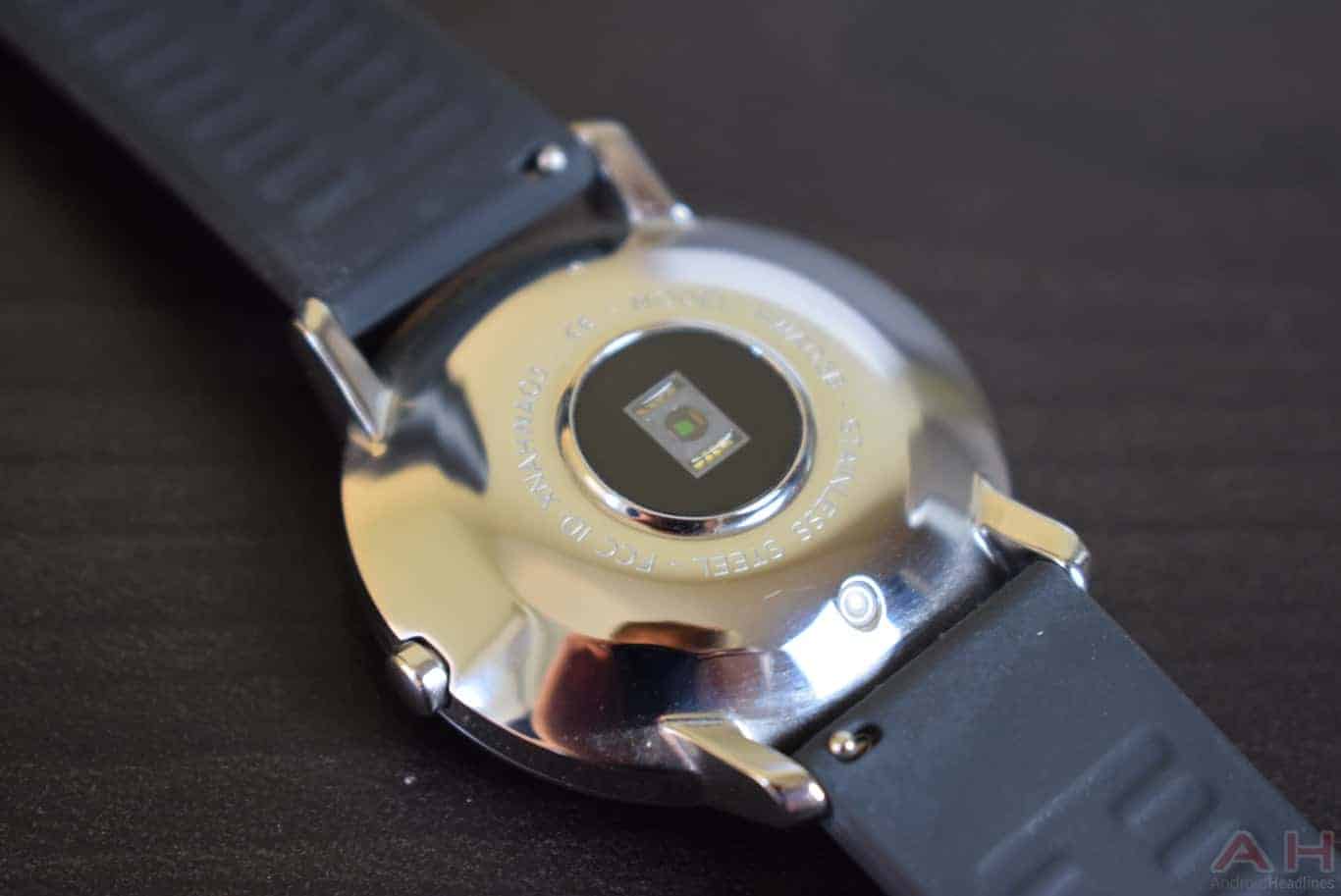 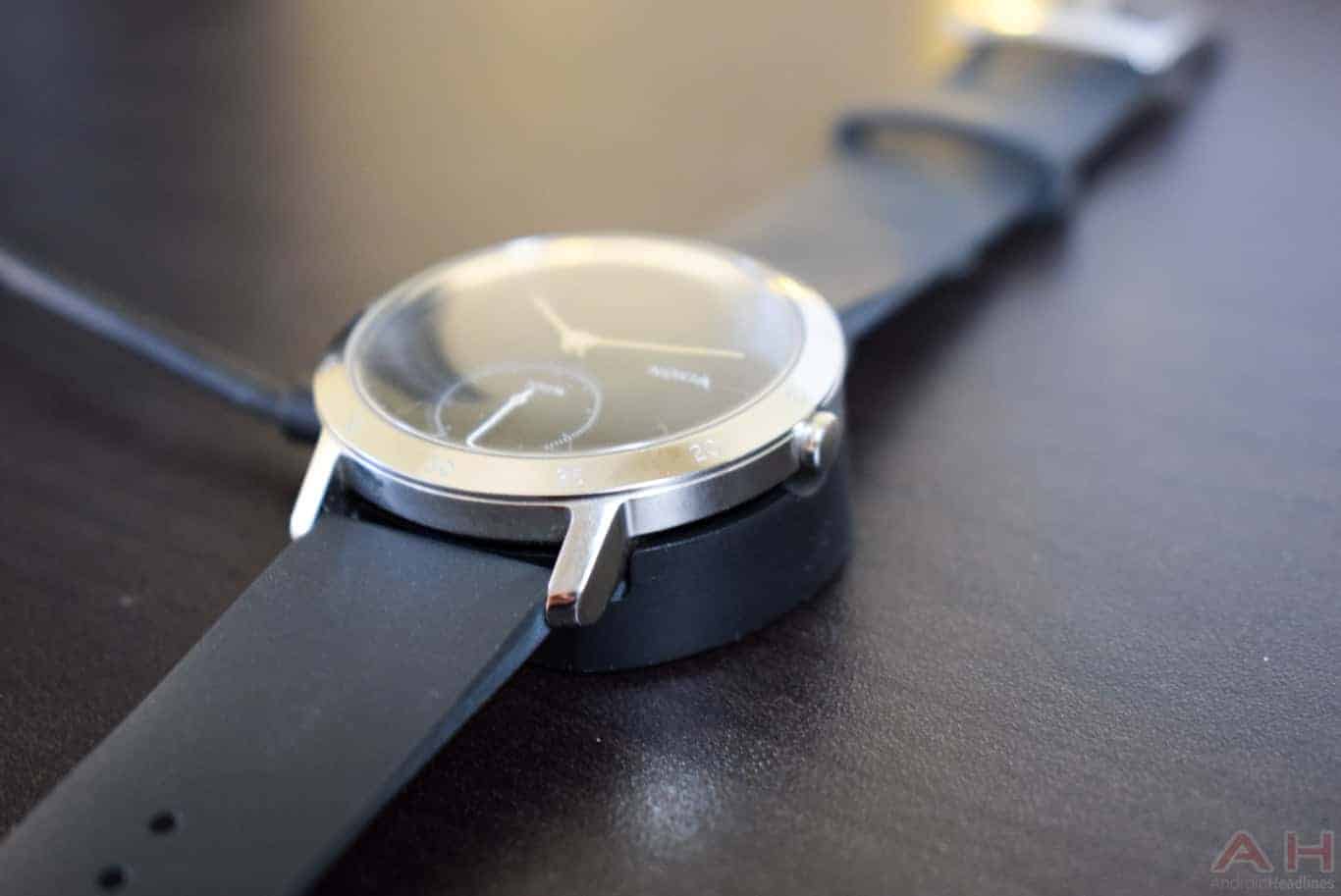 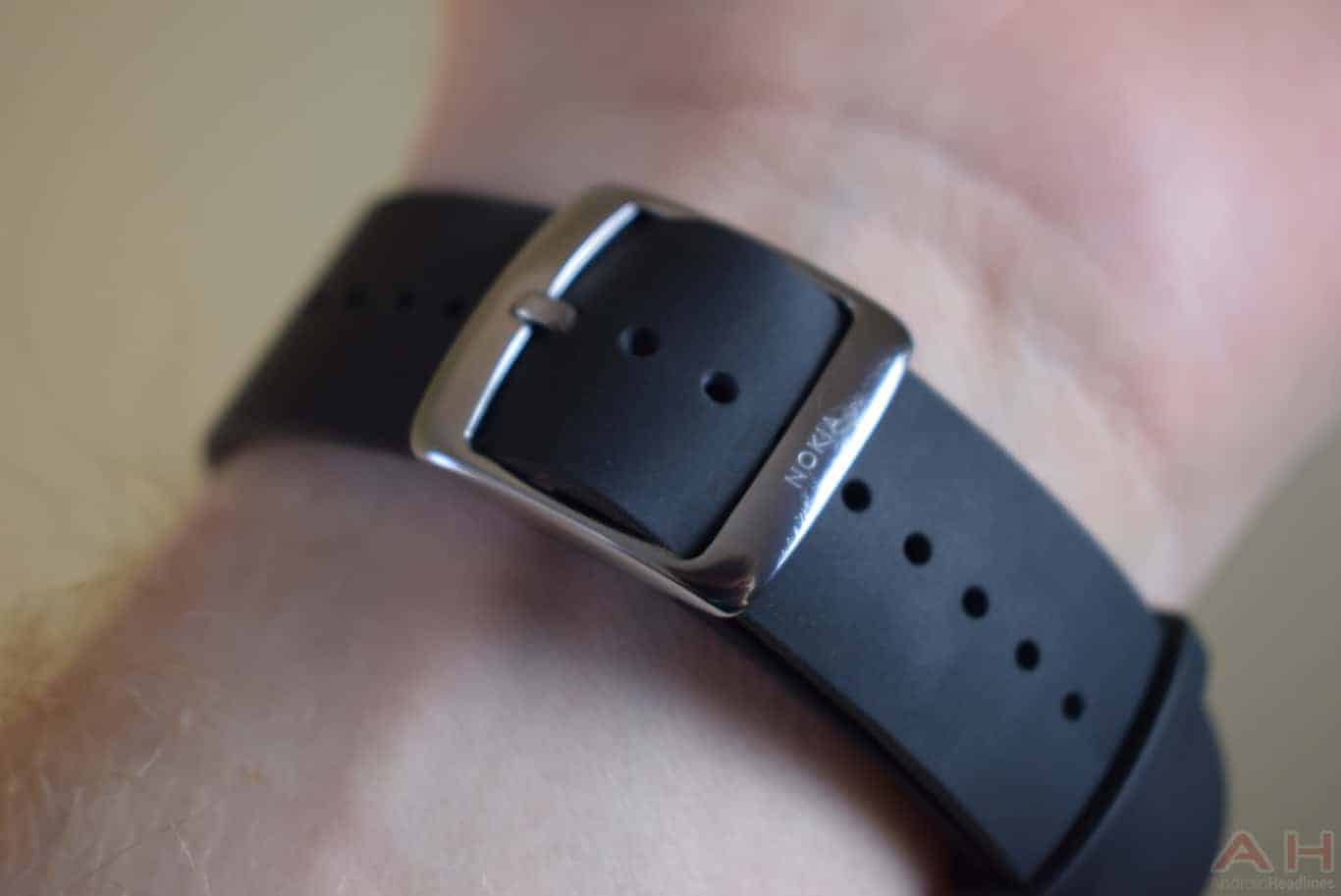 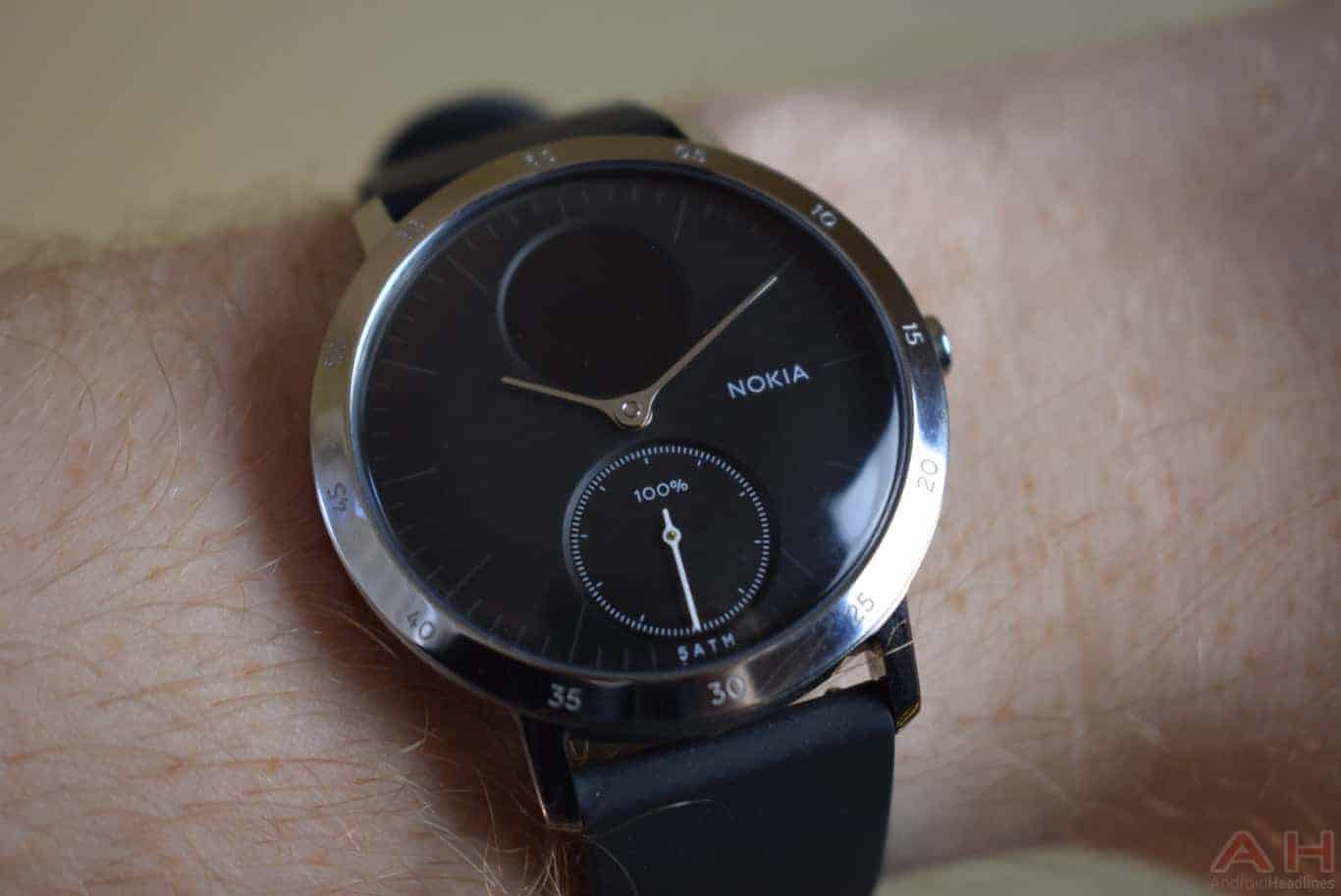 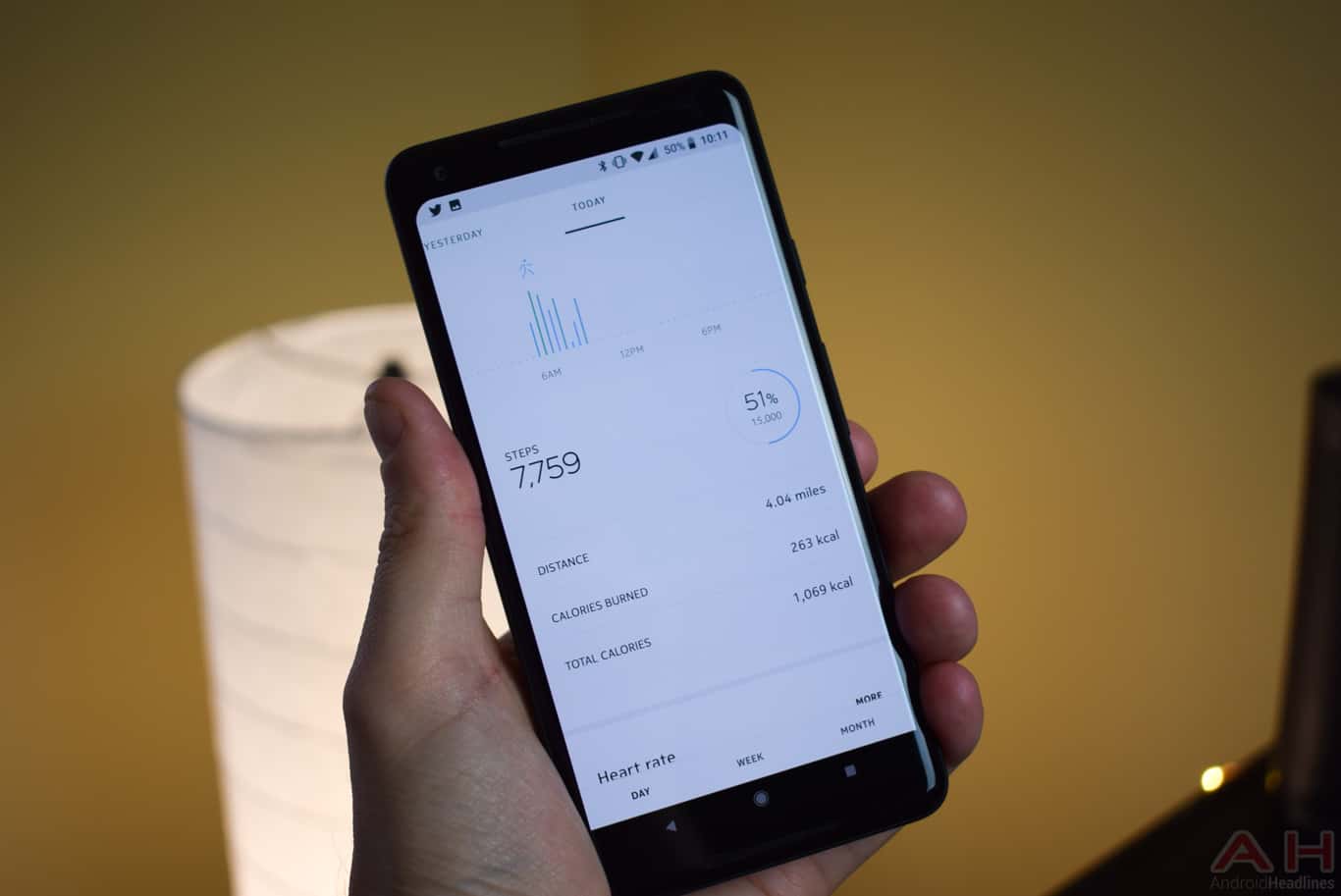 The Nokia Healthmate app, when it launched, had a whole lot of complaints. Instead of just rebranding the app and removing all “Withings” branding from the app, Nokia actually did an entirely new design on the app and moved a lot of stuff around. There were plenty of bugs and many complained about Nokia’s products not syncing with the app. But that is no longer a problem. In addition to reviewing the Steel HR, I also have the Body+ scale from Nokia (actually it’s the Withings version, as it does still have the Withings branding on it), so I’ve been using the app for quite some time, and Nokia has smoothed out all of the issues with the app, which is good to see. The app is pretty straight forward. You have five tabs at the bottom, Timeline, Dashboard, Programs, Devices and Profile. Timeline will show you your steps, any exercises that were recorded, your sleep that was tracked, and if you do have one of the scales like I do, it’ll also show your weight from when you weighed in. Which is also nice to see.

The Dashboard tab is the one that most people will want to keep an eye on. This shows all of your stats for the day, like your steps taken, your sleep, weight, blood pressure, height and so on. These are also customizable, so if there are some metrics you don’t care about as much, you can opt to drop them from the Dashboard as well. Now Programs is an interesting one, this is full of different programs you can take part in and help yourself get healthier. One of these programs is “Sleep Smarter” which will help you learn about getting more sleep and how that will help you in your day-to-day activity, even without working out regularly. Now the devices tab shows you the devices connected to your account, you can also get to the settings for each device from here, as well as check out the battery on them. Finally you have the profile, which shows your badges, goals, and other apps that you have connected (like MyFitnessPal, Google Fit, RunKeeper, etc).

The software for the Nokia Steel HR is pretty good. It offers a ton of content for you, so you can get a good insight into how well you’re doing, and help you meet your fitness goals, which is definitely important. It also shows you if you’ve been a bit lazier than you probably should have been. The app is fast, and it does sync rather quickly too. The syncing process is actually better than with Fitbit, which is a bit surprising, but good to see. 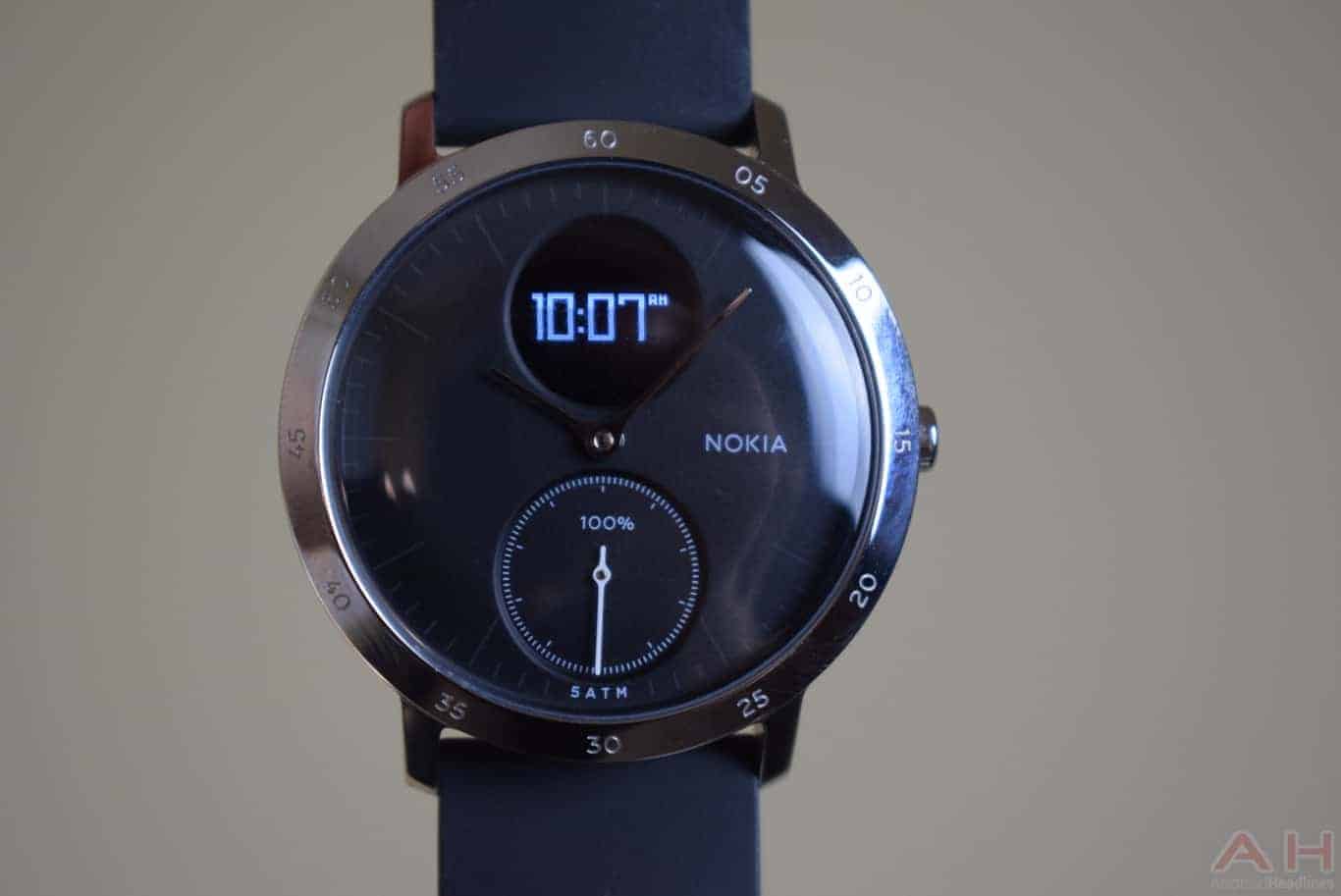 The Steel HR does track just about everything you can think of, when it comes to activity. Of course it does the usual stuff like tracking your steps and calories burned, but it can also track your workouts. Now this can be done two different ways. It can be tracked automatically, and it’ll show up in the app when you sync the next time. Or you can long-press the button on the Steel HR to begin tracking a specific exercise. This is especially useful for doing cardio exercises. Now by default, it’ll track these automatic workouts as walking (or if it sees you getting a lot of steps quickly, it’ll track it as a run). But the good thing is, you can go in and adjust the exercise to be whatever exercise you were doing. The Steel HR will also track your heart rate more than just every 20 minutes or so, when it is tracking an exercise, so you can see just how well you are really doing.

On the activity tracking page for the day, you’ll see the steps at the top which also shows you when you were more active versus other times of the day. Below that you see your number of steps as well as how close you are to completing your goal for the day. With distance, calories burned and total calories burned below that. At the bottom of the screen, you’ll see how your heart rate changed over the course of the day, as well as exercises tracked for the day at the very bottom. So it gives you a quick glance at what you did that day, and shows you how far you truly pushed yourself when working out.

Now one of the things we did notice with the Steel HR is that it doesn’t track steps as much as a Fitbit does. When wearing both, the Steel HR would be about 500 to 1,000 steps behind the Fitbit Ionic. This is likely due to the algorithm that is being used on each platform. But it’s hard to judge which one is more accurate than the other. I’d say that the Steel HR is a bit more accurate, since you can just move your arm around and get steps on the Ionic, while the Steel HR doesn’t work that way. Of course, neither is going to be 100% accurate – and the same goes for their heart rate sensors, since they are on your arm and not on your chest – but they do both work, and give you a good idea of how much you are actually walking each day, and that’s the whole purpose of having a fitness tracker.

Many may say that the Nokia Steel HR is a smartwatch, I wouldn’t agree with that. It doesn’t have any apps (other than the Nokia Healthmate app), really the only thing “smart” it does is tracking your activity. Otherwise, it’s what many would call a “dumb” watch, and that’s perfectly fine. Many people are looking for a watch that just tells them the time, but can also track their activity, so they can hold themselves accountable of how much they are actually moving throughout the day. And the Steel HR is great at that. There are two big reasons to pick up the Steel HR over any other fitness tracker out there right now. One is the battery life, it just can’t be beat on the Steel HR. The other is the fact that it looks like a traditional watch, and not like you have a computer on your wrist.