Qualcomm had introduced its all-new mobile flagship processor earlier this month, the Snapdragon 845, and now a list of upcoming Snapdragon 845-powered handsets has surfaced. It’s not exactly a secret that most premium flagship smartphones in 2018 will ship with the Snapdragon 845, as was the case for the Snapdragon 835 this year, Snapdragon 820 / 821 last year, and so on. Having said that, if you take a look at the provided image down below, you will be able to see the leaked list for next year, read on.

That being said, this list is actually organized by months, so if accurate, which is a big question at this point, it pretty much reveals when exactly will each of the upcoming flagships arrive. The first Snapdragon 845-powered devices are expected to drop in February according to the leaked list, the Samsung Galaxy S9, Galaxy S9 Plus, LG G7 and the LG G7 Plus, while the Xiaomi Mi 7 is expected to land in April. The HTC U12 will follow those five smartphones it seems, as HTC’s flagship handset will arrive in May, while the OnePlus 6 will drop in June, which actually goes against recent reports which claim that the phone will be announced in March. The Nubia Z18, and the Xperia XZ Pro-A (which is a very odd name, and sounds unreal) are also expected to arrive in June, along with the OnePlus 6.

Moving on to August, when the Nokia 10 will arrive, according to this list, while the Samsung Galaxy Note 9, Xiaomi Mi MIX 3 and the LG V40 will follow in September. October of next year is reserved for the Google Pixel 3, Pixel 3 XL, Nubia Z18S, Xperia XZ2 and the HTC U12 Plus. The Motorola Moto Z (2019) is said to launch in November of 2018, while the OnePlus 6T and the Samsung W2019 flip phone will drop in December next year. As already mentioned, if accurate, this list actually gives us a ton of info when it comes upcoming flagship phones, though truth be told, there are quite a few phones missing from this list, devices like the second-gen Razer Phone, and the second-gen Essential PH-1, presuming that Razer and Essential are planning to launch those handsets, of course. 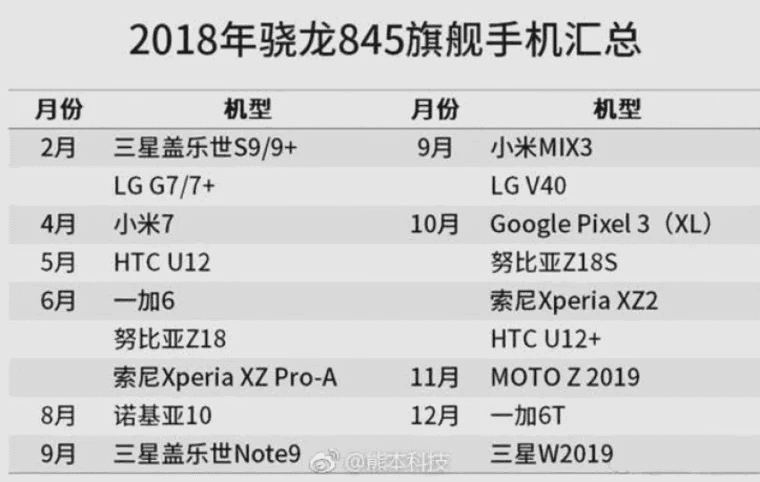