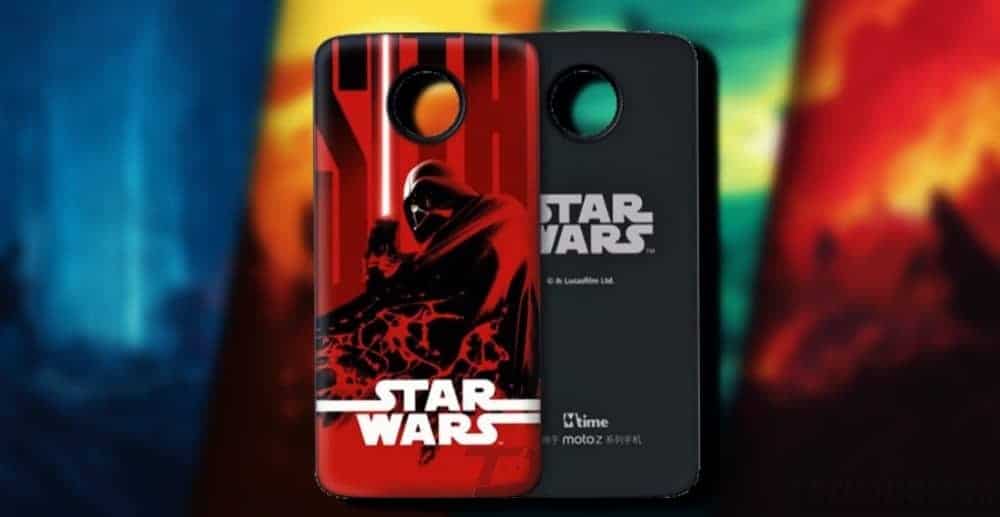 Lenovo's Motorola is apparently set to release a new Moto Mod for the Moto Z smartphone series, which seems to take the form of a limited edition Star Wars themed Style Shell. The product will reportedly be released exclusively in China, however, because this is a decorative Mod lacking any electronic components, it can technically be paired with smartphones in the Moto Z series regardless of variant and the region in which they were launched.

Disney's upcoming Star Wars: The Last Jedi is already creating massive ripples in the fabric of pop culture, and the mobile market wasn't left untouched by this phenomenon. Not long after the Star Wars-themed OnePlus 5T was unveiled for India recently, Motorola and Lenovo have apparently followed suit to collaborate with Disney in order to bring the image of the Supreme Commander of the Imperial Forces himself – Darth Vader – onto a limited edition Style Shell Moto Mod featuring the stylized letters 'SITH' in an appropriate color scheme. Once again, this is a decorative Mod that lacks internal components, which means that even though it will be launched exclusively in China, prospective buyers elsewhere could technically be able to acquire it through online retailers willing to ship in other regions. And much like with previous Mods, this new limited edition item clips on the back of devices magnetically and should be compatible with all the Motorola devices in the Moto Z series, including the Z, Z Droid, Z Force, and Z Play, as well as the Moto Z2 Play. As far as pricing goes the accessory will be released in China for 129 Yuan which converts to $19.50 at today's conversion rate, but evidently, those who may be able to acquire the product from another region may be subjected to additional fees.

The Star Wars themed Moto Mod is not yet available for purchase but it should hit the shelves within the next couple of weeks, just in time for the first screening of Star Wars: The Last Jedi on December 15. The popularity of this new title could spawn additional limited edition devices and accessories, and a previous recent rumor already hinted at the possibility that Samsung may be preparing a Star Wars themed Galaxy Note 8 as well.