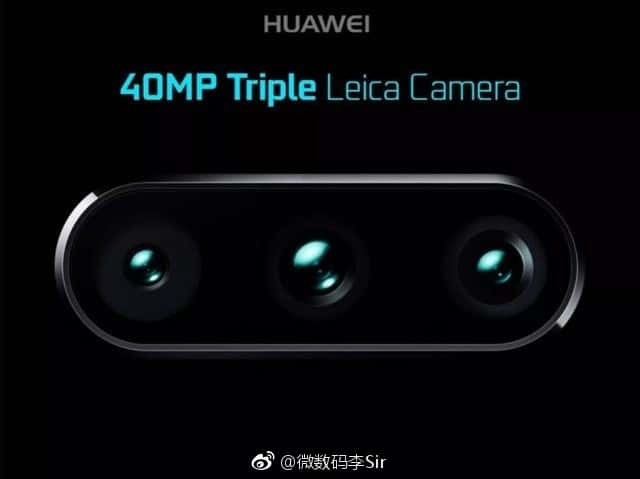 A couple of days ago, Evan Blass (aka @evleaks) leaked some rather interesting posters claiming that Huawei's upcoming phone will sport a 40-megapixel camera on the back, and believe it or not, the Huawei P11's alleged Triple Lens 40-megapixel snapper just surfaced as well. If you take a look at the provided image, you will see those three cameras which will, allegedly, be located at the back of the company's upcoming flagship. We are still not sure whether the Huawei P11 is the phone that will sport those cameras, but both reports that we've seen thus far suggest that it will, so… it's possible.

Now, those three cameras will, allegedly, support a 5x hybrid zoom, and Leica's lenses will be a part of the offering yet again. Now, a couple of days ago, some of you have probably been wondering how will Huawei fit in a 40-megapixel sensors on a phone without making it thick, well, it seems like today's rumor cleared that up, as it seems like those three rear-facing cameras will equal 40-megapixels together, that way it all makes sense. Having said that, a 24-megapixel front-facing snapper has also been mentioned in the leak the other day, does that mean that we'll get two 12-megapixel front-facing snappers? Well, it's possible, it makes sense. Now, the leak that surfaced the other day mentioned the 'Huawei PCE Series' of phones, and we're still not sure whether this is aimed at the Huawei P11 or not. The leak also said that the phone's main snapper(s) will be able to capture 100 percent more light compared to its predecessor, which is a huge claim, and AI is expected to assist the camera's performance as well, while 'Auto Framing' will be included in this package as well.

The Huawei P11 is expected to arrive in the first quarter of next year, as the Huawei P10 and P10 Plus were introduced in February this year. The Huawei P11 and P11 Plus are expected to sport considerably thinner bezels than its predecessors, and it seems like they will offer a considerably more powerful camera setup as well, even though the Huawei P10 phones came with really capable cameras as well. The Huawei P11 and its 'Plus' sibling will probably be made out of metal, and they will be fueled by the Kirin 970 64-bit octa-core SoC, Huawei's new flagship processor.