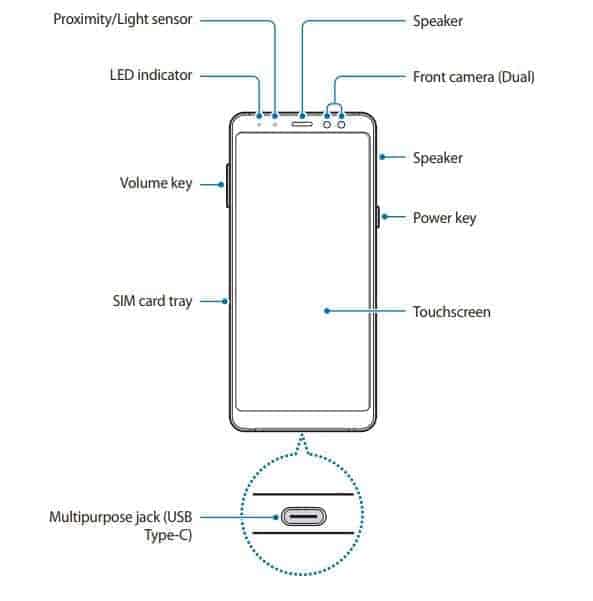 A user manual of the Samsung Galaxy A8 (2018) and the Galaxy A8 Plus (2018) has recently appeared on the website of the South Korean electronics giant. The manual details the software features of the handset and its physical design. Based on the included illustrations, the Galaxy A8 (2018) and the Galaxy A8 Plus (2018) will have a nearly bezel-less design due to the use of the Infinity Display. The display will likely have an aspect ratio of 18.5:9, which is similar to what is found on the company's recent flagship devices. Directly above the screen are the two front-facing cameras, the earpiece, the proximity and light sensor, and an LED indicator. On the bottom of the handset, the customer will find the USB Type-C port, microphone, and the 3.5mm headphone jack, while a SIM card tray and another microphone are located on the top of the device. The fingerprint scanner, on the other hand, is now located on the back and it is placed directly below the single rear camera.

The manual states that the Galaxy A8 (2018) and the Galaxy A8 Plus (2018) will feature Samsung Pay, the South Korean tech giant's mobile payment service. Since the two devices will include Magnetic Secure Transmission (MST) antennas, customers can use them even in establishments that still have the older, swiping card machines. These two handsets will sport the Always On Display functionality, a feature that allows people to control music playback and view their notifications even if the majority of the display is turned off, as the Always On display does leave some pixels turned on to show you certain functions of the phone, such as notifications and what not. The devices are expected to launch with Android 7.1.1 Nougat pre-installed, which means that users can utilize features like split-screen multitasking. Game Launcher will also come with the Galaxy A8 (2018) and it aims to group games obtained from the Google Play Store and the Galaxy Apps into a single location.

Previous rumors claimed that the Galaxy A8 (2018) will be powered by the Exynos 7785 SoC. The phone is also expected to contain 4GB of RAM and 32GB of internal flash storage that can be expanded by a microSD card. The manual further indicates that the handsets will feature fast charging, and it will be compatible with chargers that support either Samsung's Adaptive Fast Charging or Qualcomm's Quick Charge 2.0.

Advertisement
Trusted By Millions
Independent, Expert Android News You Can Trust, Since 2010
Publishing More Android Than Anyone Else
19
Today
80
This Week
572
This Month
3084
This Year
104563
All Time
Advertisement