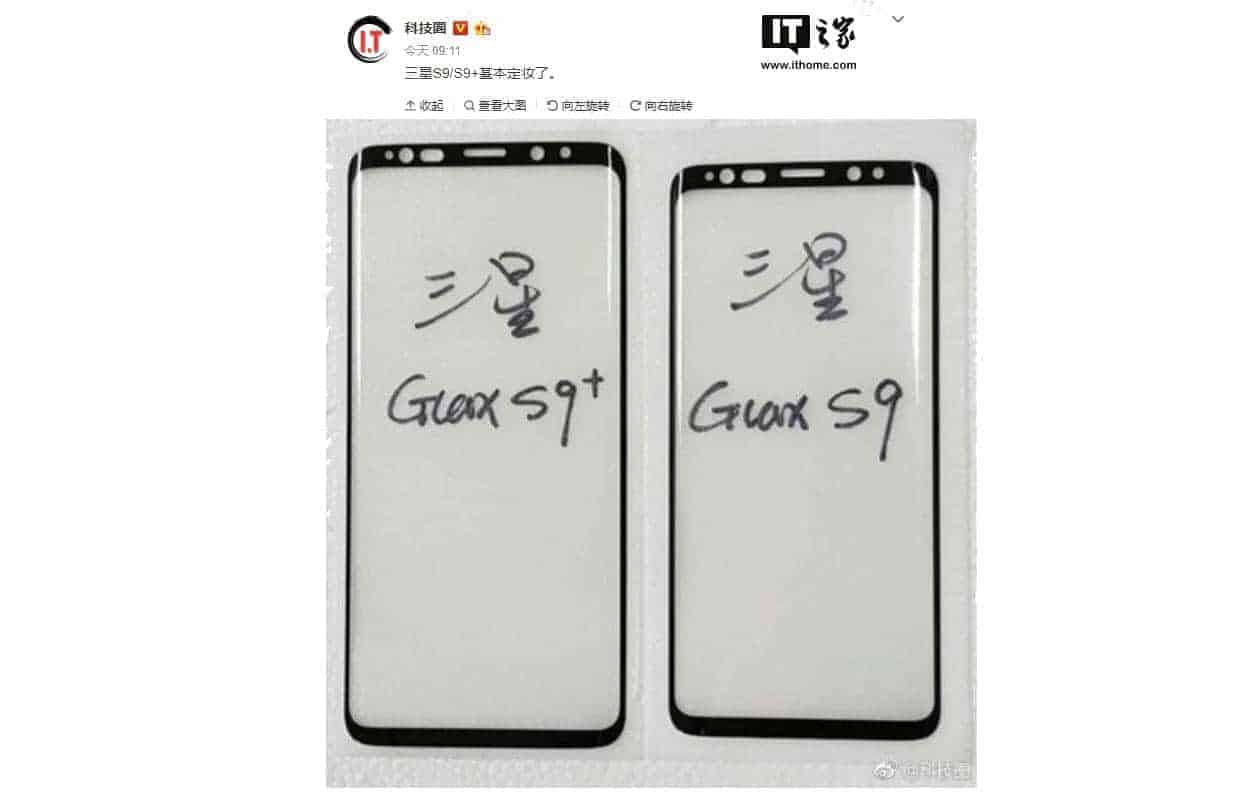 An image depicting what are said to be the front panels of the Galaxy S9 and Galaxy S9 Plus leaked online earlier today, having originally been shared on Chinese social media platform Weibo. The real-life photograph that can be seen above is in line with recent rumors about Samsung's upcoming pair of Android flagships, suggesting that the South Korean tech giant is largely looking to retain the Infinity Display-centered aesthetic of the Galaxy S8 and Galaxy S8 Plus, having only opted to slightly reduce the bottom bezels of its next two high-end offerings. Both of the newly emerged panels hence look extremely similar to the ones found on Samsung's last premium mobile duo and indicate that the new Galaxy S series will succeed a screen-to-body ratio of approximately 85 percent.

According to a variety of previous reports, the upcoming devices will only serve as incremental upgrades of Samsung's 2017 flagships and won't debut many major innovations, with Samsung reportedly focusing on delivering a highly refined version of its critically acclaimed handsets. The 5.8-inch Galaxy S9 is said to be extremely similar to its direct predecessor and will retain its 4GB of RAM and a base of 64GB of storage space while also not adopting a dual-camera setup that's expected to be featured on the Galaxy S9 Plus. The larger device will be a more significant upgrade compared to the last two additions to the Galaxy S family, being rumored to feature 6GB of RAM and be offered in variants with up to 512GB of internal flash memory. The fingerprint readers of the Galaxy S8 flagships have been repositioned to reside below the cameras of the new smartphones so that they're easier to reach, industry insiders said earlier this fall, adding that a physical Bixby button and a 3.5mm headphone jack will still be part of the package.

Both devices are said to be powered by either the Qualcomm Snapdragon 845 or Exynos 9810, depending on the region, and are rumored to launch around Mobile World Congress 2018. The Barcelona, Spain-based trade show is starting in late February and regardless of whether it hosts the announcement of the Galaxy S9 lineup, Samsung's Android 8.0 Oreo-powered offerings are expected to be released come spring.