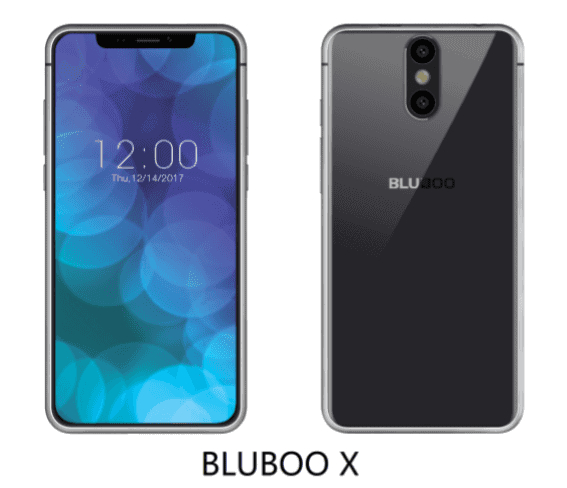 BLUBOO has decided to release an iPhone X clone, it seems, the BLUBOO X. The company did not officially announce this smartphone just yet, but it did announce the phone’s name, and even released some official renders of the device, which are included above this article. Now, in addition to releasing renders of both the front and back side of the device, the company also shared some spec info when it comes to this smartphone, so if you’re interested, read on.

As you can see, the BLUBOO X will be quite similar to the iPhone X from both the front and back sides, though its main camera placement will be different. The notch that is included on the iPhone X will be present on the BLUBOO X as well, and the LED flash will be located between the two rear-facing cameras on this handset. The company’s branding will be included on the back of the phone, and it seems like the device will be made out of metal and glass. All of the phone’s physical keys will be included on its right-hand side, and the phone will actually ship out with an AMOLED panel. That AMOLED display will measure 5.99-inches, and we’re looking at a fullHD+ panel here. The BLUBOO X will offer facial recognition tech as well, and the company refers to it as ‘Face ID’, while dual 21-megapixel snappers will be included on the back side of this handset, and they will protrude on the back a bit.

A 5,500mAh non-removable battery will also be a part of this package, and the device’s fingerprint scanner will probably be included on the side. That is more or less all the info that the company shared regarding the BLUBOO X, as we still do not know when will this handset be officially announced. BLUBOO actually teased its BLUBOO S9 flagship quite recently as well, another phone which will ship with an AMOLED display, though unlike the BLUBOO X, the BLUBOO S9 will resemble the Galaxy S8, and quite possibly the upcoming Galaxy S9, even though its design hasn’t been revealed just yet. Having said that, stay tuned, we’ll report back as soon as more info regarding either of those two smartphones appears.