Anki is a company on the cutting edge of the toy industry, one who has innovated since the release of the original Anki Drive product hit the market. Anki recently launched their Overdrive Fast & Furious Edition to the market, but they aren’t forgetting about folks who might already have their other big product: Cozmo. Cozmo is a little robot with a big AI brain that can do all sorts of things, from playing games to singing songs, Cozmo is a little personality waiting to be unleashed. Up to this point, however, Cozmo was somewhat limited in what it could do, simply because there was only so much in the app to interact with.

All that changes with the launch of Constructor Mode for Cozmo, a brand-new Code Lab based mode that lets users create their own scenarios and behaviors for Cozmo, all while bringing new mini-games and ideas to the table. Folks that have used the Code Lab will find themselves in familiar territory, although now Anki offers a new vertically oriented block stack for programming, in addition to the pre-existing horizontal one. This also includes new if statements, math operators, variables, function calls, and plenty of others to choose from, helping kids and adults alike learn the basics of programming and AI modeling without the degree that’s usually associated with them.

Folks looking to just have some new fun with Cozmo can look forward to a half-dozen new mini-games that don’t require work to be put in to enjoy. The infographic below details the new games individually, but they are as follows: Tiny Orchestra, Magic Fortune Teller, Fire Truck Alarm, Cube Whack, Hot Potato, and Light Show. All of these show the wide variety of behaviors and games that Cozmo can play, and how truly interactive the AI inside this lovable little robot can be. What’s really cool is that Anki created all these new games in the Constructor mode, meaning you can completely deconstruct them and create your own variations without much hassle. Cozmo retails for $179, and can be found in a brand new packaging at the Amazon link below. 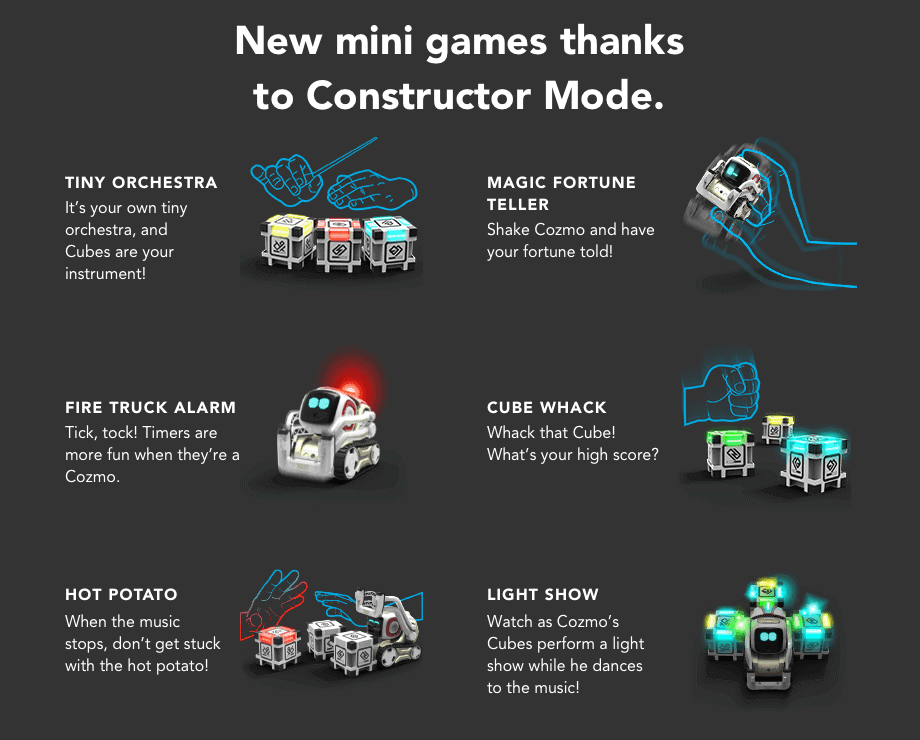