Smartphone manufacturer OnePlus is currently rolling out an update to the OnePlus 5 which will upgrade the handset’s operating system to Android 8.0 Oreo. Once the software upgrade is installed, owners of the smartphone may start using the Picture-in-Picture mode, a functionality that allows them to view two apps at the same time by layering one application placed in a smaller window on top of another one. Another feature of the upgraded version of the Android OS comes in the form of notification dots. With this feature, users are notified about apps that have notifications directly from the home screen and tapping these dots will open a set of quick actions. Google Play Protect is now incorporated into the operating system and scans the device for malware or any other form of potentially damaging software.

Aside from the operating system upgrade, the update also contains several new features and performance improvements that are specific to the manufacturer’s proprietary skin. After installing the software upgrade, the OnePlus 5 will start supporting the Parallel Apps feature, a functionality that allows the user to run two instances of the same app simultaneously. The calculator app now has a history feature while an alarm calendar functionality is now incorporated into the clock app. The camera app’s user interface, on the other hand, has been redesigned, according to OnePlus, and the quality of images produced by the handset should also improve once the update is installed. In addition, the update installs the December 2017 Android security patch which contains fixes for a number of vulnerabilities found in the media framework of Google’s operating system.

The software package is now rolling out automatically and may take several days before all units of the OnePlus 5 receive the update. It is advisable that the software upgrade is only downloaded when the handset is connected to a Wi-Fi network since getting the installation file through a mobile data connection may result in additional carrier charges. Before installing the update, users are advised to back up all files and images stored on the smartphone to a microSD card or a personal computer in order to prevent loss of important data and make sure they have at least 50 percent of battery charge left. 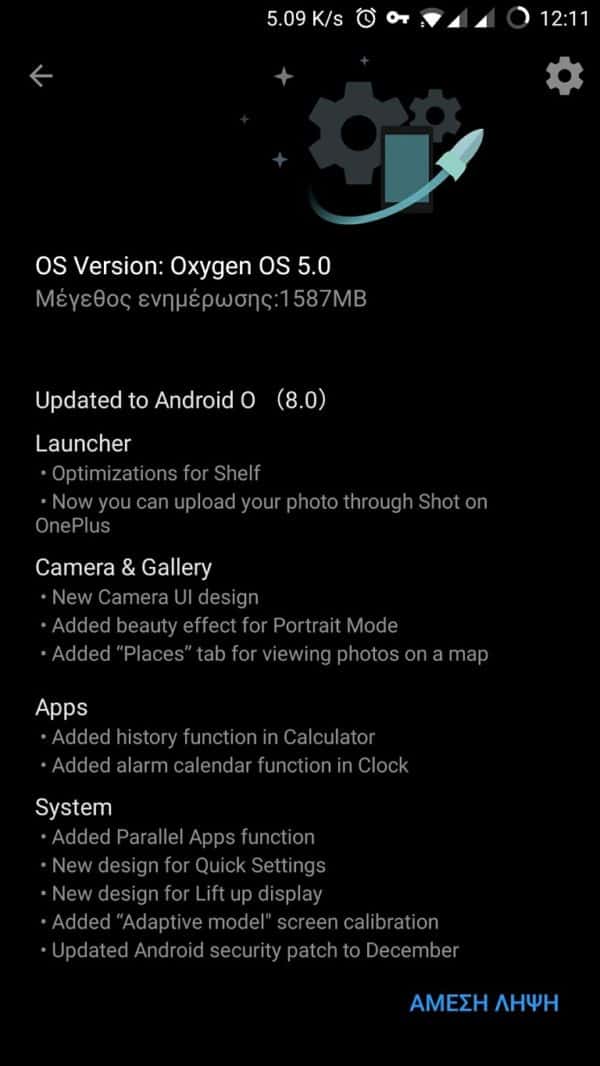