It seems like OnePlus has decided to pull the Android 8.0 Oreo update for the OnePlus 3 and OnePlus 3T handsets. As most of you probably already know, the company has started rolling out a stable version of Android 8.0 Oreo to the two devices about two weeks ago, but it seems like the company decided to pull the update due to the fact that some bugs still remain in there, and the rollout will continue as soon as OnePlus resolves such issues.

OnePlus did not confirm this as of yet it seems, but a number of users reported that they were able to see the update at one point, and the next it was gone, and the system reports Android Nougat as the last available version for download. Users have been reporting this via OnePlus’ official forum, and also on Reddit. Android 8.0 Oreo update along with OxygenOS 5.0 on the OnePlus 3 and 3T, and that update actually brought a number of new features to the device. OxgenOS 5.0 came with the Picture-in-Picture mode for the OnePlus 3 and 3T, while Notification Dots have also been included. This update also changed up the notification shade a bit, and the same can be said for some other parts of the UI. All in all, this update brought with it quite a few changes that we’ve seen in stock Android 8.0 Oreo build, as OxygenOS is modeled after stock Android, but it also brings some of its own improvements to the tablet.

Speaking of which, OxygenOS 5.0 also came with some improvements for OnePlus’ launcher that you’ll find on the company’s devices, it changed up the folders a bit, while you can now also see unread notifications by long-pressing on a particular app. For example, if you have an unread Gmail notification which is still in your notification shade, you can long press on a Gmail icon which is on your homescreen in order to read that notification, or dismiss it. That is more or less it, OnePlus still did not confirm anything, so we cannot say with utmost certainty that the update has been pulled, but it sure seems like it is, but if that’s the case, the rollout will probably continue really soon. 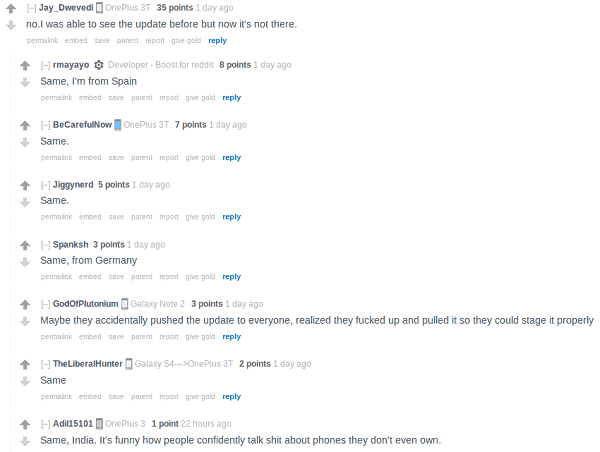