According to a recent listing in the Geekbench database, Lenovo appears to be working on a new smartphone bearing the model number K520. The device is powered by a Qualcomm-made processor which seems to be paired with 4GB of RAM and runs Android 8.0 Oreo out of the box which will presumably be covered with various proprietary UI elements. The model number suggests that the device will somehow fit in the Lenovo K series of smartphones, but unlike the recent K8 and K8 Plus devices introduced over the course of the past couple of months, the K520 doesn’t adopt a processor made by MediaTek.

Instead, according to Geekbench, the Lenovo K520 relies on the Qualcomm MSM8953 chipset, specifically the Snapdragon 625 mid-range silicon built on a 14nm LPP process. It houses eight ARM Cortex-A53 CPU cores clocked at up to 2.0GHz, an Adreno 506 graphics chip, and in this particular case appears to be paired with 4GB of RAM, though Geekbench shows only 3.6GB available to the user. As far as synthetic benchmark results are concerned, the Lenovo K520 was able to score 933 points in the single-core tests, as well as 5,370 points in the multi-core benchmarks. Given these specifications, the Lenovo K520 might be a direct sequel to the K6 series released at the end of 2016, which was also powered by a Qualcomm mid-range chipset at that time, namely the Snapdragon 430, while carrying Full HD 16:9 panels. On the other hand, the Chinese OEM already launched the new K8 series a couple of months ago including the K8 and K8 Plus, and both smartphone models have returned to a chipset made by MediaTek, not to mention that the Lenovo K8 features a lower-resolution sub-fullHD display compared to the previous K6 series.

Regardless of what final nametag will be carried by the Lenovo K520 once it hits the shelves, it’s evident that the device will fit in the mid-range market segment and thus it will likely be priced accordingly below the $500 mark. Also remains to be seen is whether the K520 will be a one-off device or be part of a wider series of devices carrying the ‘Note’, ‘Plus’ or ’Power’ monikers. 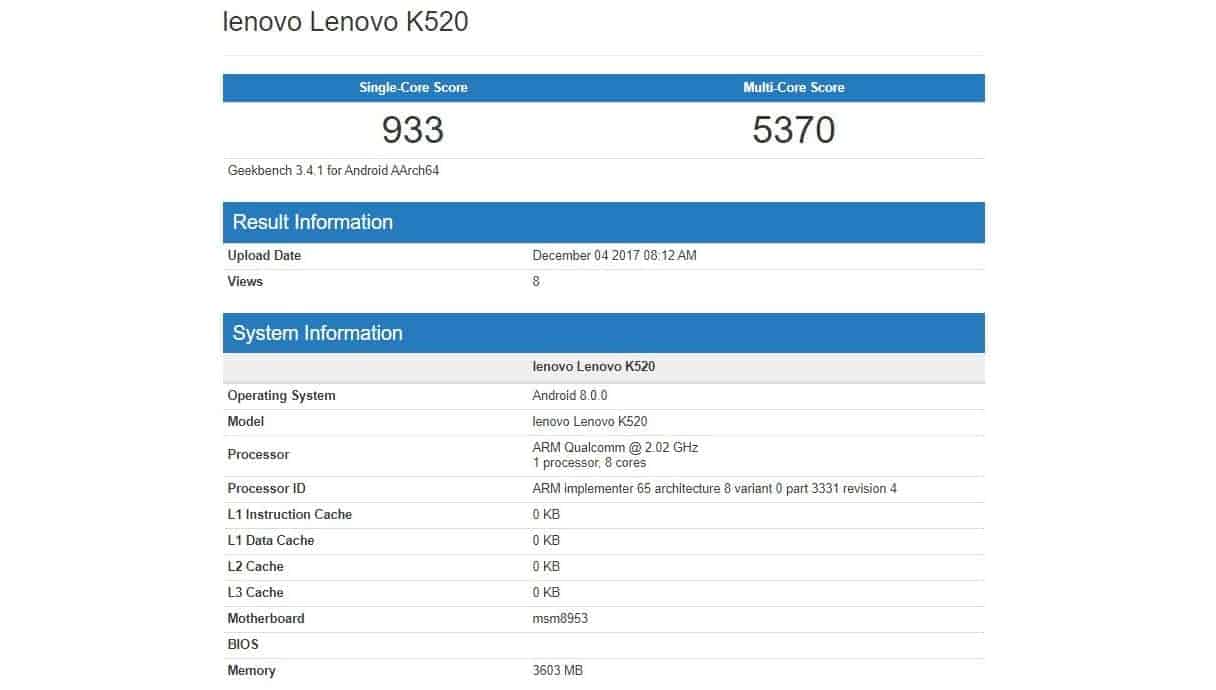