The ZTE Axon 7 is no longer available for purchase in the United States and according to a Redditor who apparently got in touch with ZTE's customer service, this is unlikely to change because the device reached end of life. While it could theoretically arrive back in stock in the future, the smartphone is no longer manufactured so existing stock – if there still is any in some retailer or distributor’s warehouse – is bound to diminish moving forward. Meanwhile, although ZTE did previously confirm that the Axon 7 will receive a sequel, as yet there’s not much information to go by in regards to the supposed ZTE Axon 8’s whereabouts and availability.

The ZTE Axon 7 earned a lot of fans after it was originally launched in mid-2016, and for good reasons. The metal-clad device offered numerous premium-grade characteristics at a midrange price and became one of the best smartphones of 2016 in terms of value for money. The handset was equipped with a 5.5-inch AMOLED display bearing a resolution of 2560 x 1440 leading to a pixel density of 538ppi, and was powered by the Snapdragon 820 chipset from Qualcomm, featuring four Kryo CPU cores clocked at up to 2.15GHz, 4GB of RAM, and an Adreno 540 graphics processor. The main 20-megapixel camera with OIS and phase detection autofocus offered 4K video recording capabilities at 30 frames per second, while selfie enthusiasts relied on an 8-megapixel sensor.

With the ZTE Axon 7 now reaching end of life, the story moving forward could go two ways: either the device will go down in the history books as one of ZTE’s best value-for-money devices, or the company will remain true to its word and continue the series with a direct sequel. The ZTE Axon 8 has yet to be officially announced, but the smartphone seemed to have previously surfaced on China’s equivalent of the FCC – TENAA – earlier this year, and later this summer the same handset bearing the model number ‘A2018’ was spotted in GFXBench boasting 128GB of on-board memory, 4GB of RAM, and oddly enough, the same Snapdragon 820 chipset as the Axon 7. However, many moons have passed since the alleged ZTE Axon 8 made these unexpected appearances, and if the device will become available at a later date, it could present different characteristics compared to the previous leaks. Until more details emerge, the ZTE Axon 7 has been officially retired and will not return to the United States. 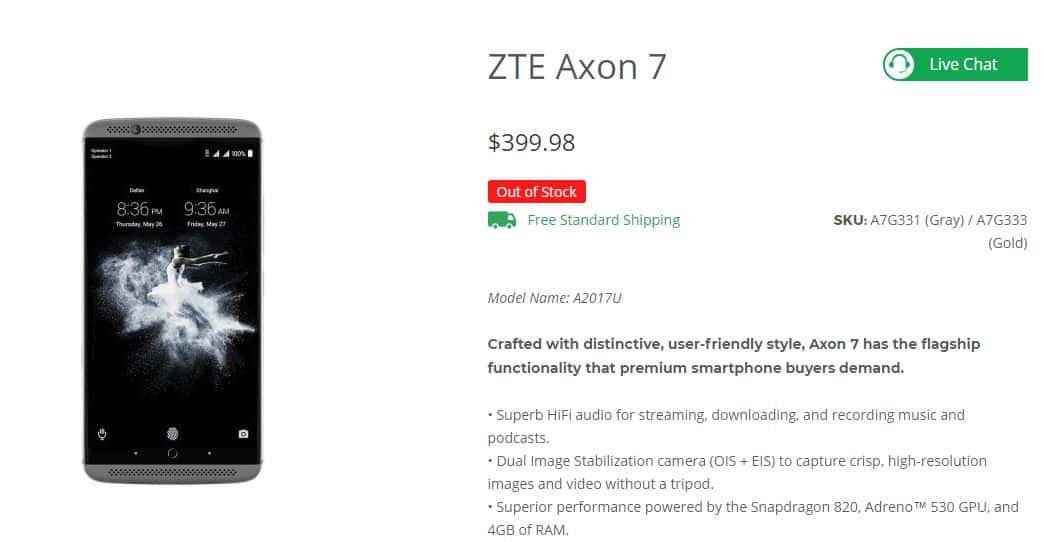