Vivo launched a selfie-focused Vivo V7+ Android smartphone in India back in September, and now it’s apparently getting ready to release the Vivo V7 as well. The Chinese smartphone maker teased both smartphones over the summer, but the Vivo V7 remained unreleased so far and little is officially known about it. Although only the Vivo V7+ hit the market so far, that may well change soon as the company has now sent out media invitations for a launch event scheduled for November 20th in India. The elusive Vivo V7 is expected to be the star of the upcoming happening and despite the fact that no official information is available regarding the handset, various leaks and rumors have tried to paint a picture of what to expect in recent weeks. The Vivo V7 is also rumored to launch in the Philippines on the same date.

Based on recent leaks, the upcoming Vivo V7 will have a 5.7-inch FullView display with an HD+ resolution of 1,440 x 720 pixels and a high screen-to-body ratio. The handset will reportedly pack a mid-range Qualcomm Snapdragon 450 octa-core processor just like the Vivo V7+, paired with 4GB of RAM and 32GB of native storage space expandable with a microSD card. Just like its bigger brother, the Vivo V7 is also selfie-focused and sports a 24-megapixel front camera. Other specs include a 16-megapixel rear camera, a rear-facing fingerprint sensor, 4G VoLTE connectivity, 3,000mAh battery, and Android 7.1 Nougat running out of the box, with Vivo’s proprietary FunTouch OS on top. The smartphone reportedly supports dual-SIM connectivity as well, albeit it remains to be seen whether it will have a Hybrid SIM setup or a dedicated microSD slot.

Overall, the Vivo V7 will seemingly sport similar specifications to the Vivo V7+, but the latter has a larger 5.99-inch display and a bigger 3,225mAh battery. The Vivo V7 will reportedly launch in Black and Gold color options, with no mention of the new Energetic Blue avatar of the Vivo V7+. The Energetic Blue Vivo V7+ will launch on November 15th in India and Vivo is also throwing in a free one-time screen replacement within 12 months of purchase, but it remains unclear whether such an option will be on the table for the Vivo V7 as well. No official pricing details are available at this point, but the Vivo V7 could hit the market at roughly Rs. 19,000 (about $290). 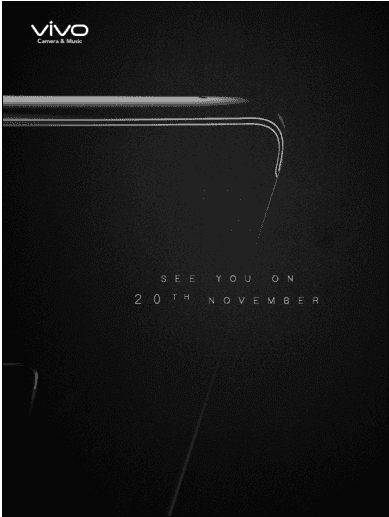