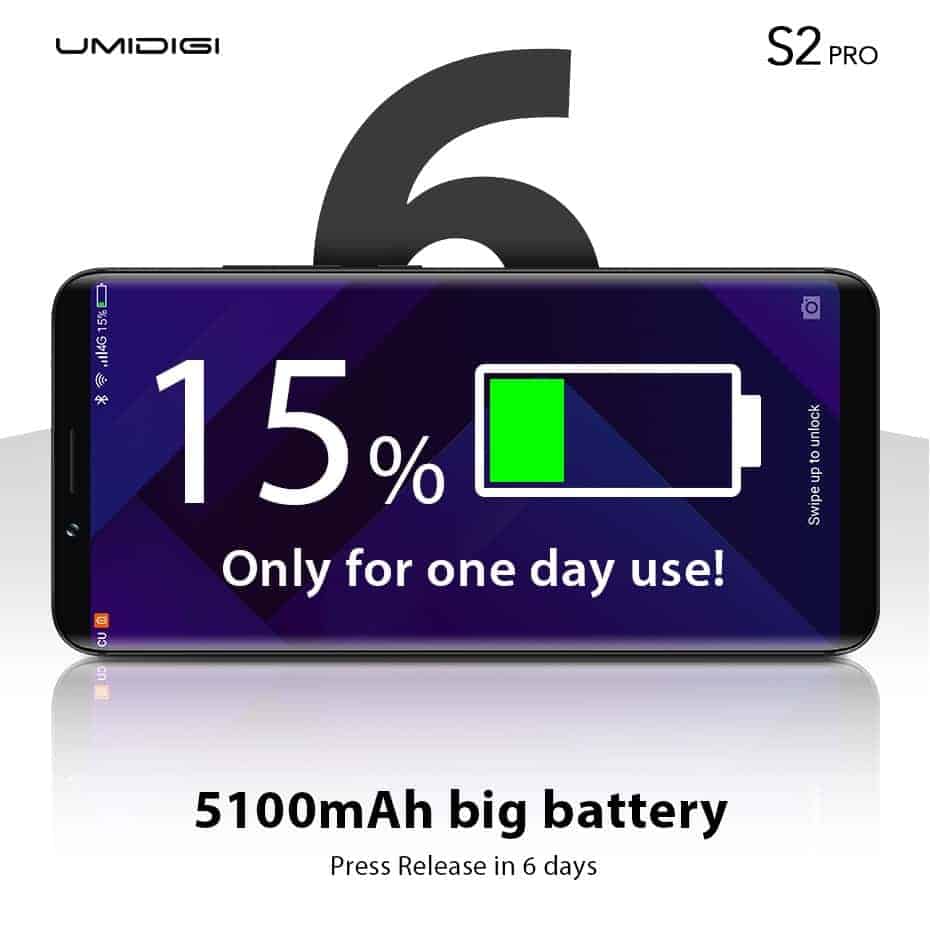 Earlier in the week UMIDIGI started teasing an announcement for November 8 relating to one of its recently announced smartphones, the UMIDIGI S2 Pro. The original teaser came with the number 7 in the background and explained an announcement would be coming through in seven days time. Following which, yesterday the company sent out a new teaser further confirming it is now counting down the days to its latest announcement.

As to be expected, the new teaser comes with the number '6' in the background and like the previous teaser focuses in on one of the phone's key selling points, the battery. As this is a smartphone which comes packed with a fairly significant 5,100 mAh capacity battery. While this tease focuses on the battery, yesterday's one focused on the UMIDIGI S2 Pro's display selling point, and in particular, that it features a bezel-less design. However, while the two teasers do clearly point to major selling points on offer with the phone, this current teaser also comes with the suggestion that the company will 'unveil some new and secret tech' on November 8. Although no specifics details were provided on this. So it is currently unclear whether this is directly relevant to the battery or is something completely different. For example, UMIDIGI did recently confirm that one of its upcoming smartphones would come equipped with an under-glass fingerprint sensor. Although there has been nothing to suggest this will be on offer with this smartphone.

As this is a smartphone that has already been announced, much of the specs (including the bezel-less display and the 5,100 mAh battery teased here) are already known factors. It had previously been suggested that the UMIDIGI S2 Pro would become available to buy around the end of October so this announcement date does seem to fall in line with that expectation. As for the rest of the already-known specs, the UMIDIGI S2 Pro features a 6-inch display along with a 2160 x 1080 resolution. In addition to 6GB RAM, 128GB storage, a MediaTek Helio P25 processor, 5-megapixel front-facing camera, fingerprint sensor, and Android 7.0 (Nougat). This is also a phone boasting a rear dual camera setup consisting of a 13-megapixel primary camera and a 5-megapixel secondary camera.