According to a recent patent application published by the United States Patent and Trademark Office (USPTO), Uber is working on devising ways to combat motion sickness experienced by its passengers by creating an augmented environment designed to stimulate their visual, auditory, and tactile senses in accordance with the motion of the vehicle transporting them. The system would be able to utilize an autonomous vehicle’s maneuvering data in order to generate appropriate counter-stimulations and could rely on controlled airflow and seats with haptic feedback, as well as various lights and displays.

Recent studies have shown that the reason why some people get motion sickness while traveling in a vehicle is that the body motion doesn’t match with what the eyes are seeing. Effectively, the eyes tell the brain that you are moving even though you may be relaxing on the back seat of the car, and in evolutionary terms, this type of a sensory mismatch can only occur when the body has been poisoned. The brain is misinformed by the conflicting sensory data and reacts accordingly by inducing emesis as the only quick and natural way of getting rid of what it thinks might be neurotoxins. Having said that, Uber has patented a technology aiming at countering motion sickness by tricking the brain with additional tactile and visual stimuli. The system relies on an autonomous car’s sensors to collect data regarding the vehicle’s maneuvers, and for each maneuver, it generates “stimulation commands for interior output systems” including a light system/display, vibrating seats, airflow that can simulate wind, and audio feedback. Essentially, the system aims to negate the sensory mismatch by creating an augmented environment designed to trick the body into movements that match visuals more closely.

Whether or not this technology will ever see the light of day is unknown, as patent applications don’t usually guarantee commercial availability, but the newly discovered documents indicate that Uber is actively considering ways to improve the user experience of its passengers with new technologies. Uber is currently making efforts toward expanding its fleet of self-driving cars, having recently entered into an agreement with Volvo in order to acquire 24,000 vehicles in the coming years. 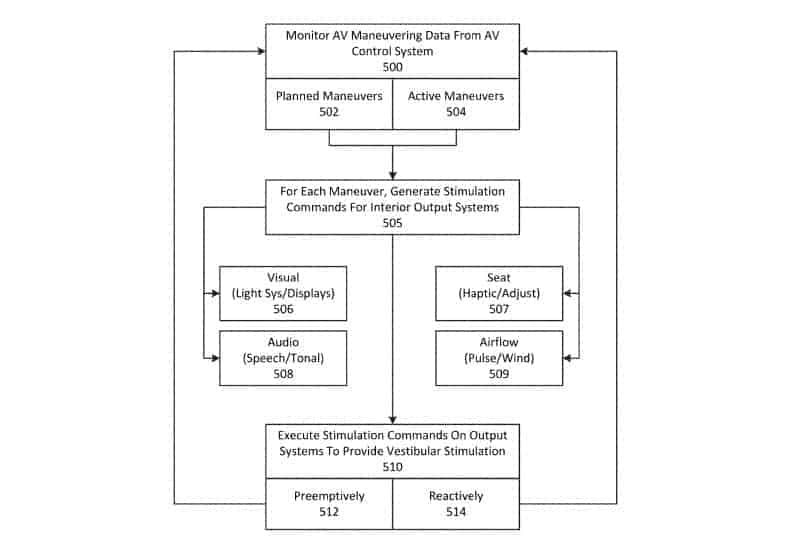