Skip to content
Advertisement
Trusted By Millions
Independent, Expert Android News You Can Trust, Since 2010
Publishing More Android Than Anyone Else
5
Today
47
This Week
230
This Month
2899
This Year
112962
All Time
Advertisement A peculiar device that’s alleged to be a Sony-made smartphone appeared in the database of mobile benchmark Geekbench earlier this week, having been listed as the Sony Xperia ZG Compact and identified as featuring specs that not only put it in the lower mid-range segment of the handset market but don’t appear to be in line with anything that the Japanese company is believed to currently be working on. The Xperia ZG Compact was listed as featuring 2GB of RAM and what appears to be the octa-core Snapdragon 810, an old system-on-chip from Qualcomm that launched in the first half of 2014 and was commercialized in the likes of the HTC M9, LG G Flex 2, Moto X Force, and even Sony’s own Xperia Z5 lineup.

The supposed Xperia ZG Compact was also tested as running some version of Android 7.1.1 Nougat which is yet another obsolete feature and one that Sony already left behind with most of its latest devices which run Android 8.0 Oreo out of the box. Nearly all signs point to the newly unveiled benchmark listing being falsified, i.e. the name of the tested phone being fake, with Sony seemingly having little reason to ship a device with years-old hardware; while the Snapdragon 810 was introduced as a flagship chip three and a half years ago, even today’s mid-range silicon modules are not only more powerful and energy-efficient but comparably cheap to manufacture and purchase. Given the dubious nature of the listing and the relative ease of tricking benchmarks into thinking they’re testing devices with names that aren’t their own, it’s likely that the test record seen below won’t amount to a new commercial handset.

Sony’s mobile division struggled to perform in recent times, having experienced declining sales over the course of this year, as revealed by the company’s latest consolidated financial report. The Minato, Tokyo-based original equipment manufacturer is reportedly ready to abandon its OmniBalance smartphone design next year and adopt a more bezel-free aesthetic reportedly called “Mirai,” with insiders recently claiming that the revised product look could debut as soon as the next iteration of Mobile World Congress scheduled to start in late February in Barcelona, Spain. 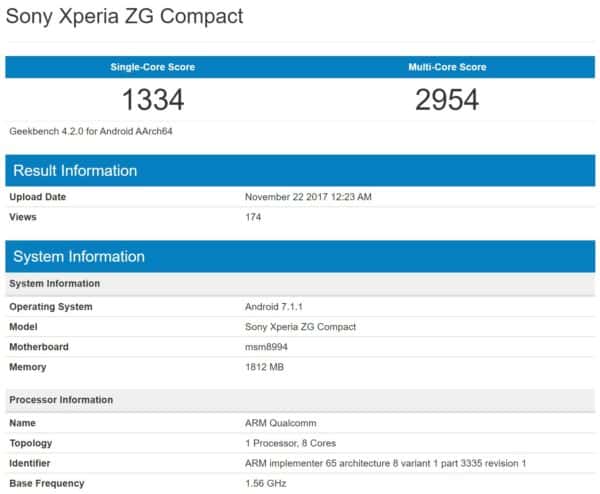