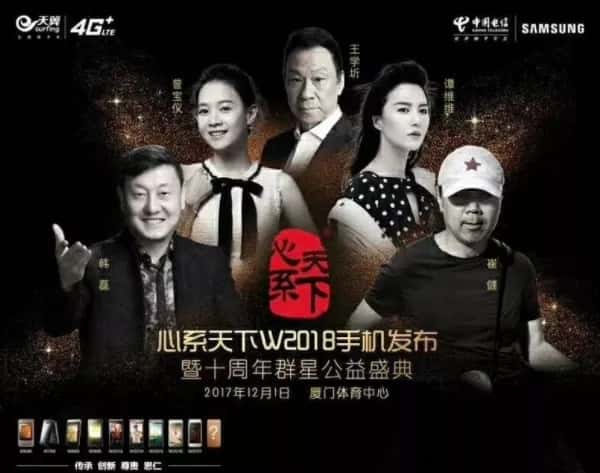 Samsung will be trotting out its flagship-tier flip phone, the W2018, for the Chinese market on December 1, according to what appears to be leaked marketing copy. The poster is full of posh-looking individuals, and shows off Samsung's Android flip phone lineup thus far in the bottom left corner. Although the poster is centered around the W2018 and photos of it seemingly leaked not long ago, Samsung has opted to leave the new device's image out of the poster, opting to have a simple question mark stand in for it in the lineup at the bottom left of the poster.

A major OEM launching a flip phone in 2018 may come as a shock to people in some markets, but the trend is alive and well enough in China to warrant Samsung dropping a phone mostly on level with the Galaxy S8 in the country. The W2018 boasts 6GB of RAM, alongside 64GB of internal storage, with the same powerful Qualcomm Snapdragon 835 that drives today's major flagship devices sitting at the heart of the phone. The outer and inner screens are both 1080p affairs, but at only 4.2 inches diagonally, this provides a razor-sharp 524 pixels per inch, making this a VR-friendly flip phone. As far as the cameras, Samsung has included a 5-megapixel unit for selfie duty, and a 12-megapixel camera around back. The whole show is kept lit by an arguably meager 2,300mAh battery, and will have Android 7.1.1 (Nougat) running out of the box. Naturally, an update to Android 8.0 (Oreo) is likely in the device's future.

The Samsung W2018 comes from a long line of Android flip phones, many of which have been flagship-level affairs. The W2018 is set to be the most powerful flip phone on the planet when it drops, filling the shoes of the Qualcomm Snapdragon 820-powered Samsung W2017. Flip phones in general, especially powerful ones that can offer a full-featured experience, are seeing a resurgence in many markets worldwide. Even in the United States, a market that seemed to have moved on from the trend, it's not hard to find LTE-equipped flip phones on major carriers. It should be noted, however, that many of these are feature phones, as opposed to the international philosophy of milking a full smartphone experience from a classic form factor.