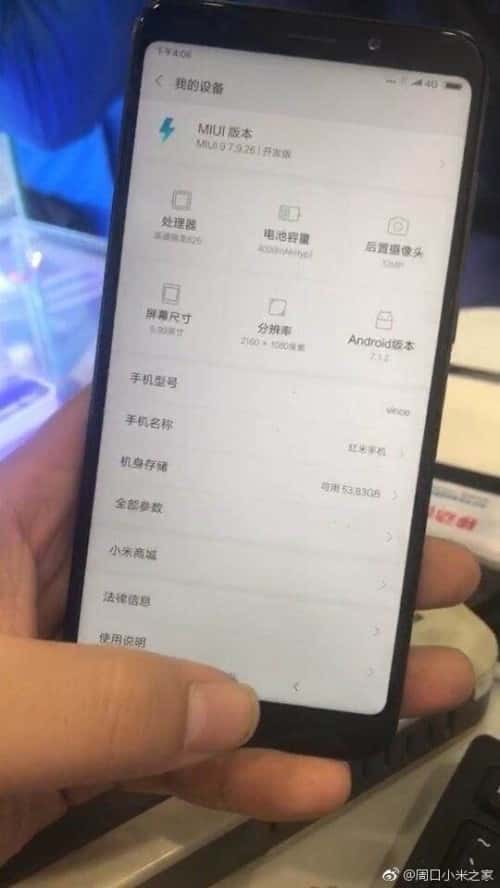 The Xiaomi Redmi Note 5 has just surfaced yet again, this time around we get to take a look at the phone's real life image, though this is not the first Redmi Note 5 real life image that surfaced. In any case, this image goes hand-in-hand with some previously leaked content, which suggests that this is the final design of the company's upcoming smartphone. The Redmi Note 5, as you can see, will sport rather thin bezels, considerably thinner than the Redmi Note 4, and all other, previously released Redmi-branded phones.

The Redmi Note 5's display will sport rounded corners, and on-screen buttons will be a part of this offering. Unfortunately, we do not get to see the back side of the device, but chances are that the fingerprint scanner is placed on the back, while you will also notice that a power / lock key is located on the right-hand side of this phone. The volume up and volume down buttons can be found on the left side of the Redmi Note 5, and the phone will be made out of metal. This image proves that MIUI 9 will come pre-installed on the Redmi Note 5, though that was to be expected. MIUI 9 will be included on top of Android 7.1.2 Nougat, which is also something that this image reveals, and in addition to that, we also get to check out some other specs of the phone. The leaked image suggests that the Snapdragon 625 64-bit octa-core SoC will fuel this smartphone, while the device will pack in 64GB of storage, and a 4,000mAh non-removable battery. A 5.99-inch fullHD+ (2160 x 1080) display will be included as well, which will make this phone the first Redmi-branded device to sport an 18:9 display aspect ratio. A 12-megapixel snapper is also mentioned here, and this leak more or less confirms all the leaks that we've been seeing thus far.

Having said that, the Redmi Note 5 got listed on JD.com rather recently, even though the retailer did not reveal the device's spec sheet. In any case, that listing more or less confirms that the announcement of the handset is coming soon, and the Redmi Note 5 could land along with the Redmi 5 and Redmi 5 Plus which have also been leaked frequently lately.