Skip to content
Advertisement
Trusted By Millions
Independent, Expert Android News You Can Trust, Since 2010
Publishing More Android Than Anyone Else
8
Today
48
This Week
314
This Month
2272
This Year
112352
All Time
Advertisement After plenty of anticipation, Razer has finally announced its first smartphone, after purchasing Nextbit earlier this year. The Razer Phone is a smartphone that is aimed primarily at gamers, and every single aspect of this smartphone demonstrates just that. The Razer Phone has the world’s first 120Hz display on a smartphone, which is going to be great for gaming as it gives the users a much smoother experience. The display itself is a 5.7-inch Sharp IGZO panel with a resolution of 2560×1440.

Razer has also included cinematic audio in the Razer Phone, which does also have Dolby Atmos support. What this means is that the audio was tuned by Dolby and it is Atmos certified. As if that wasn’t enough, Razer has also included a 24-bit DAC, which does not mean that there is a headphone jack, because there isn’t one here. There is a USB-C to 3.5mm adapter included in the box, which is where the DAC is actually located. That DAC is certified by THX, the same company that certifies speaker and sound systems in movie theaters, so you can expect some pretty incredible sound from a pair of wired headphones with the Razer Phone. It does also have a pair of front-facing speakers, something that appears to be making a comeback. 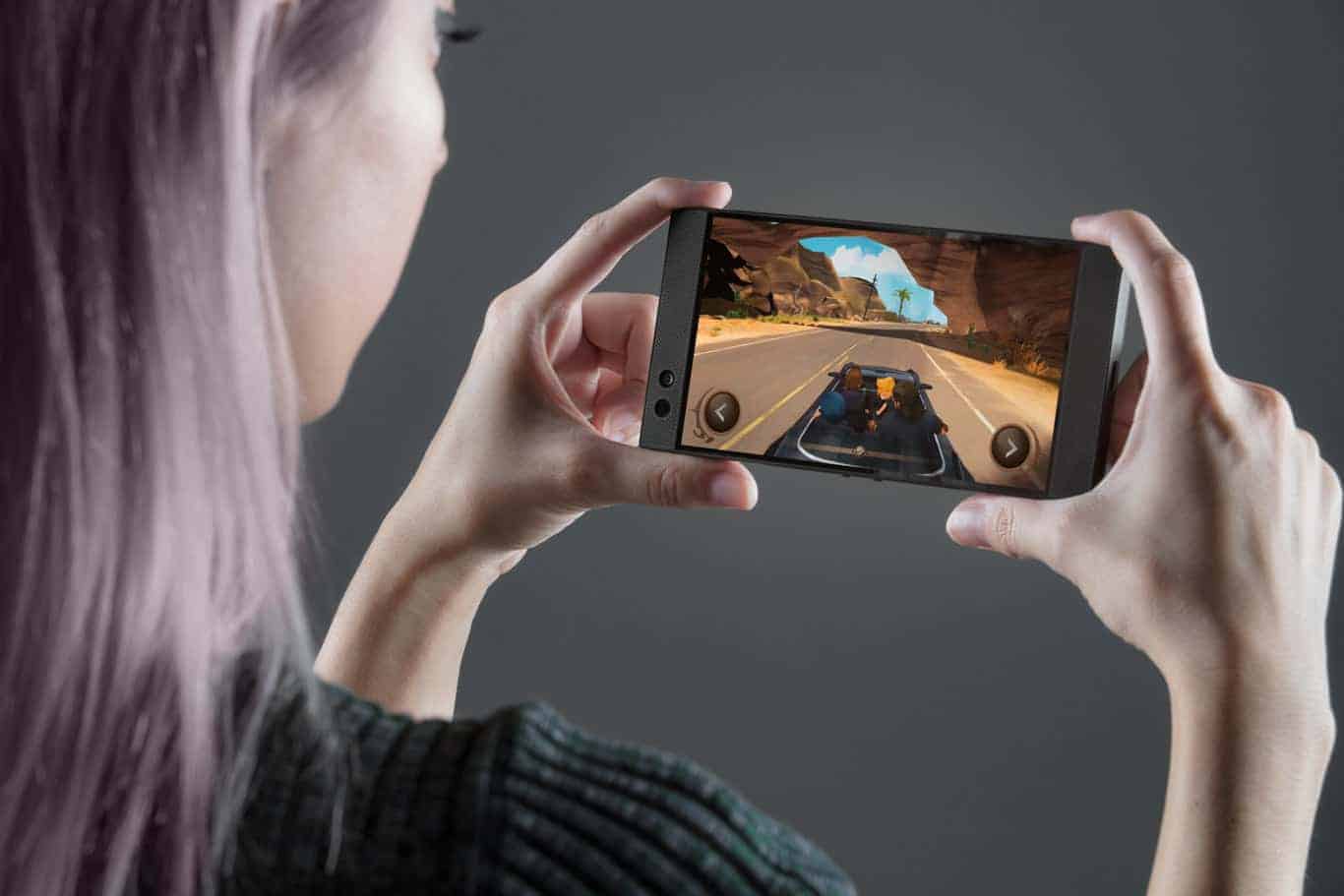 Those speakers aren’t the primary reason for a large chin and forehead on the Razer Phone though. The company says this was done because it expects users to use the phone in landscape the majority of the time. Whether that is for playing games or watching videos. That is also why the volume rocker is on the left side and in the middle, and the power button is in the middle on the right side. Making it easier to use when in landscape. The power button also doubles as a fingerprint sensor. Razer also took some design cues from its laptop range, of course you can tell that it does look an awful lot like the Nextbit Robin, not a huge surprise since it was likely the Robin team working on this phone. The speaker grille on the phone was actually taken from the Razer Blade lineup. As well as some of the materials used on the Razer Phone, so it’ll fit in well with Razer’s existing lineup of products.

The Razer Phone is a legit powerhouse, and you’d expect that from a phone that is made for gamers, and a phone from Razer. Under the hood, you’ll find a Snapdragon 835 running the show, which is accompanied by 8GB of RAM. Razer states that the 8GB of RAM may seem like overkill for most Android smartphones at this point, but the company feels that it is the right amount of RAM for its userbase. Razer also says that its phone dispenses heat better than other smartphones like the Galaxy S8 Plus, which means that it won’t throttle as often if at all, another important aspect for gamers. This is all powered by a whooping 4000mAh battery, which is going to allow for some pretty insane screen on time numbers, according to Razer. It’s one of the largest batteries in a smartphone today. 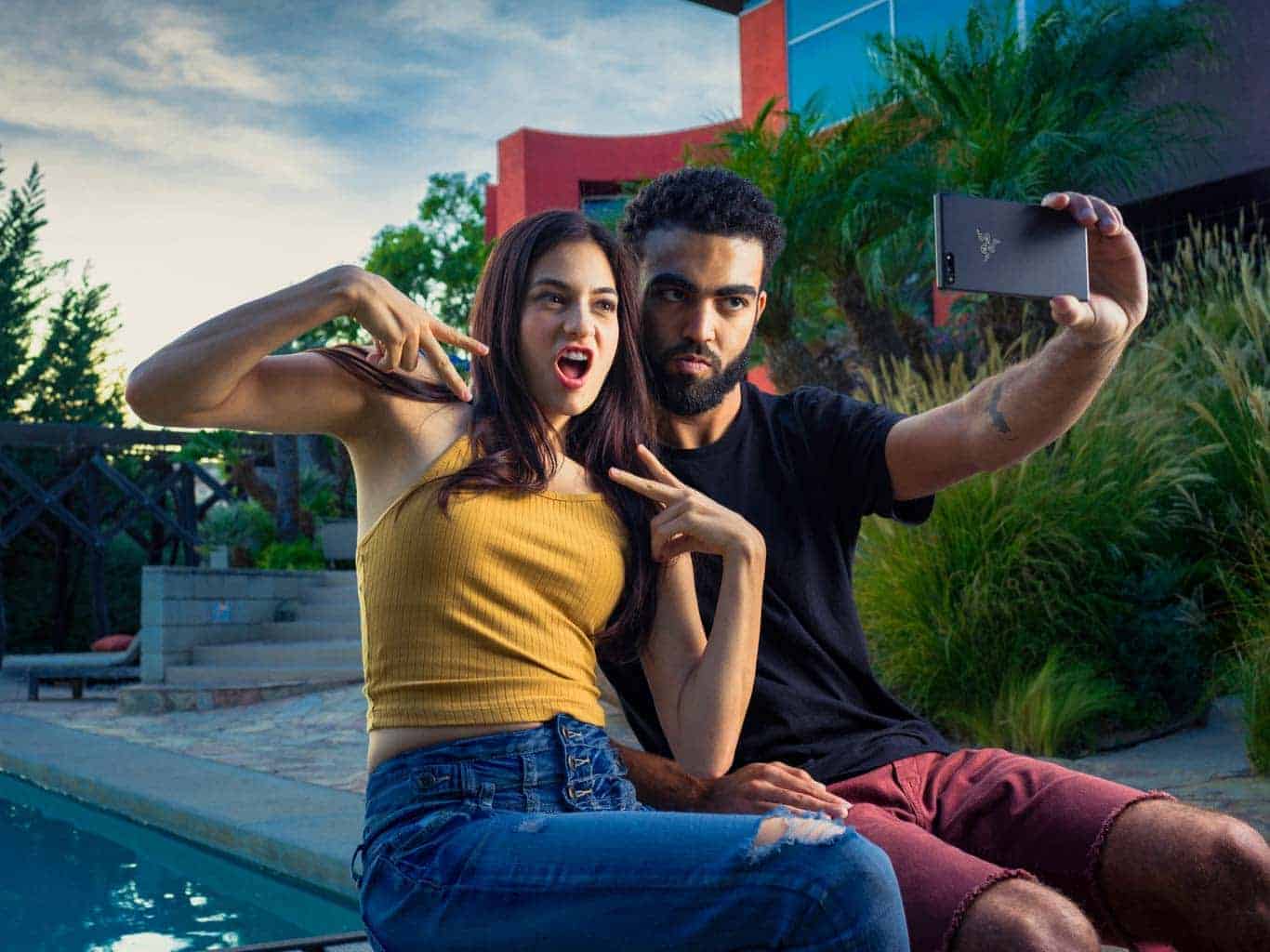 There is a dual-camera setup on the rear of the Razer Phone. The company is using dual 12-megapixel cameras. The standard 12-megapixel camera has a f/1.7 aperture while the zoom lens has a f/2.6 aperture and both lenses do sport phase detection auto focus. Rounding out the camera module on the back, there is also dual tone LED flash for getting some great low-light photos. Razer says that the camera on this phone is one of the best in the business right now. The front-facing camera is a 8-megapixel shooter that has an aperture of f/2.0, and there’s no front-facing flash.

Software-wise, the Razer Phone is running on Android 7.1.1 Nougat, and it will get updated to Android 8.0 Oreo in the future, but no firm date has been set. The software is mostly stock Android, on the surface. Since this is Razer, though, there are a ton of optimizations under the hood to make this a gaming machine. Razer has also worked with a number of game studios to get some games optimized specifically for the Razer Phone. This includes Arena of Valor, Gear Club and Final Fantasy XV. What’s interesting with Final Fantasy XV is that it’s the full game, and there is no frame-rate lock on it, which is going to give users an entirely new experience with this game. Razer is also bringing its Game Booster from PC over to mobile, and it’ll be part of the Cortex Suite of software.

The Razer Phone is up for pre-order right now from Amazon as well as the Razer Store for $699 in the US. Over in Europe, it is exclusives to Three. The Razer Phone will be available on November 17th in both the US and Europe. It will be available unlocked, only, and will support GSM bands only (read: it won’t work for Verizon and Sprint). And finally, it is only available in one color, black.