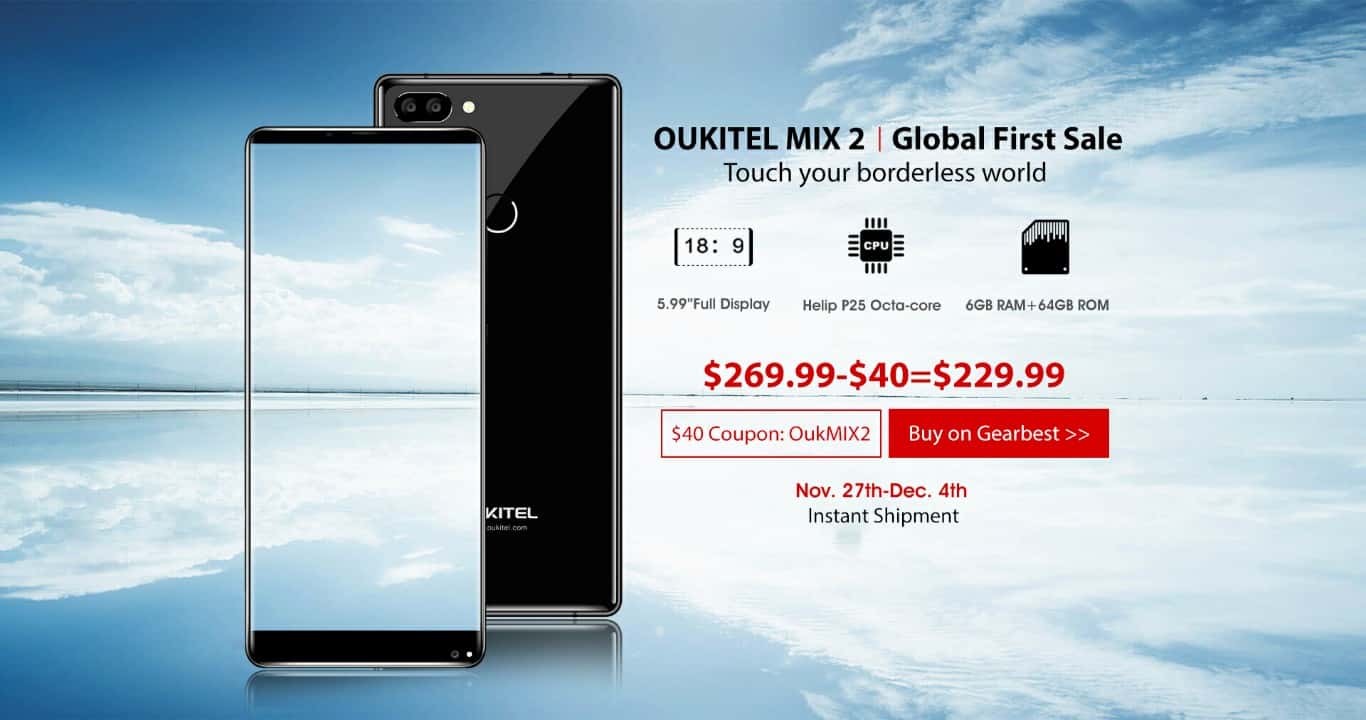 The OUKITEL MIX 2 was announced quite recently, and the phone has been available for pre-order since November 19 for $269.99 over at GearBest. Having said that, if you’re interested in getting this smartphone, but you thought that it could be more affordable, well, you’re in luck, as we have a coupon code to share with you, which will knock $40 off of the phone’s price tag, which means it will cost you only $229.99, should you choose to get it. This coupon code is valid only if you get the phone in the next week or so, until December 4, and it seems like OUKITEL will ship the phone to you as soon as this period ends, even though the official pre-order period ends on December 15.

The OUKITEL MIX 2 is a phone which sports really thin bezels all around, and interestingly enough, its front-facing camera is placed in the lower-right portion of the phone’s front side. This handset comes with a rear-facing fingerprint scanner, and a dual camera setup on the back. The phone is made out of metal and glass it seems, and it actually comes with a rather solid set of specs, especially considering its price point. The device sports a 5.99-inch fullHD+ (2160 x 1080) display, while it also packs in 6GB of RAM and 64GB of native storage. This handset is fueled by the Helio P25 64-bit octa-core processor, while the phone comes with a 4,080mAh non-removable battery. On the back of this handset, you’ll find 16 and 0.3-megapixel cameras, while a single 8-megapixel shooter is included on the phone’s front side. Android 7.0 Nougat comes pre-installed on the OUKITEL MIX 2, while there are two SIM card slots included in this package.

The OUKITEL MIX 2 is a direct successor to the OUKITEL MIX, which was clearly inspired by the Xiaomi Mi MIX, and even the OUKITEL MIX 2 is, to an extent. If you’re in the market for a phone with really thin bezels, and you’re looking for a solid set of specs while you don’t want to break the bank, well, the OUKITEL MIX 2 may be a good choice, especially considering you can get a $40 coupon as we speak. If you'd like to take a closer look at the phone, the company's promo video has been embedded down below.