An HTC-made smartphone bearing the model number X2-HT that may be the U Play 2 or a new revision of the U11 Life was listed in the database of mobile benchmarking tool Geekbench earlier today, having been spotted as featuring some value-oriented specs and Android 8.0 Oreo, the latest stable version of Google’s ubiquitous operating system. The handset appears to be positioned to compete in the upper mid-range segment of the market, being identified as sporting the Snapdragon 660, Qualcomm’s latest octa-core SoC that already proved its worth in the likes of the OPPO R11, Xiaomi Mi Note 3, and the Nokia 7. The chipset found powering the HTC X2-HT has a maximum operating frequency of 2.21GHz, suggesting that the Taiwanese original equipment manufacturer unsurprisingly opted to use the full potential of Qualcomm’s piece of silicon for its next Android phone.

The HTC X2-HT was also listed as being powered by 4GB of RAM and running Android 8.0 Oreo at the time of its testing, though the benchmark didn’t clarify whether the handset’s OS has been reskinned by the OEM or if the device featured a stock version of Android. HTC recently embraced Google’s Android One program with the U11 Life, albeit only in some territories, and while the two are now closer than ever before following their collaboration on the Pixel and Pixel 2 lineups, as well as Google’s $1.1 billion purchase of some of HTC’s talent, the phone maker hasn’t given any indication that it’s intending to participate in Android One initiative with the majority of its future offerings and likely doesn’t have plans to do so. With the international version of the U11 Life having extremely similar specs to those of the HTC X2-HT with the exception of its SoC of choice (Snapdragon 630), the newly sighted device could be an improved revision of the recently commercialized mid-ranger. On the other hand, launching such a phone this close to the previous one wouldn’t make much business sense as the two would have to compete directly with each other.

Some dubious rumors that emerged earlier this month also suggested that HTC is preparing to release yet another Android mid-ranger in December, albeit that info wasn’t backed by any credible sources and claimed that the upcoming handset will feature the Snapdragon 652 instead of the Snapdragon 660. The most likely scenario is that the X2-HT is actually the HTC U Play 2 that will be unveiled in late winter, approximately a year after its predecessor launched. 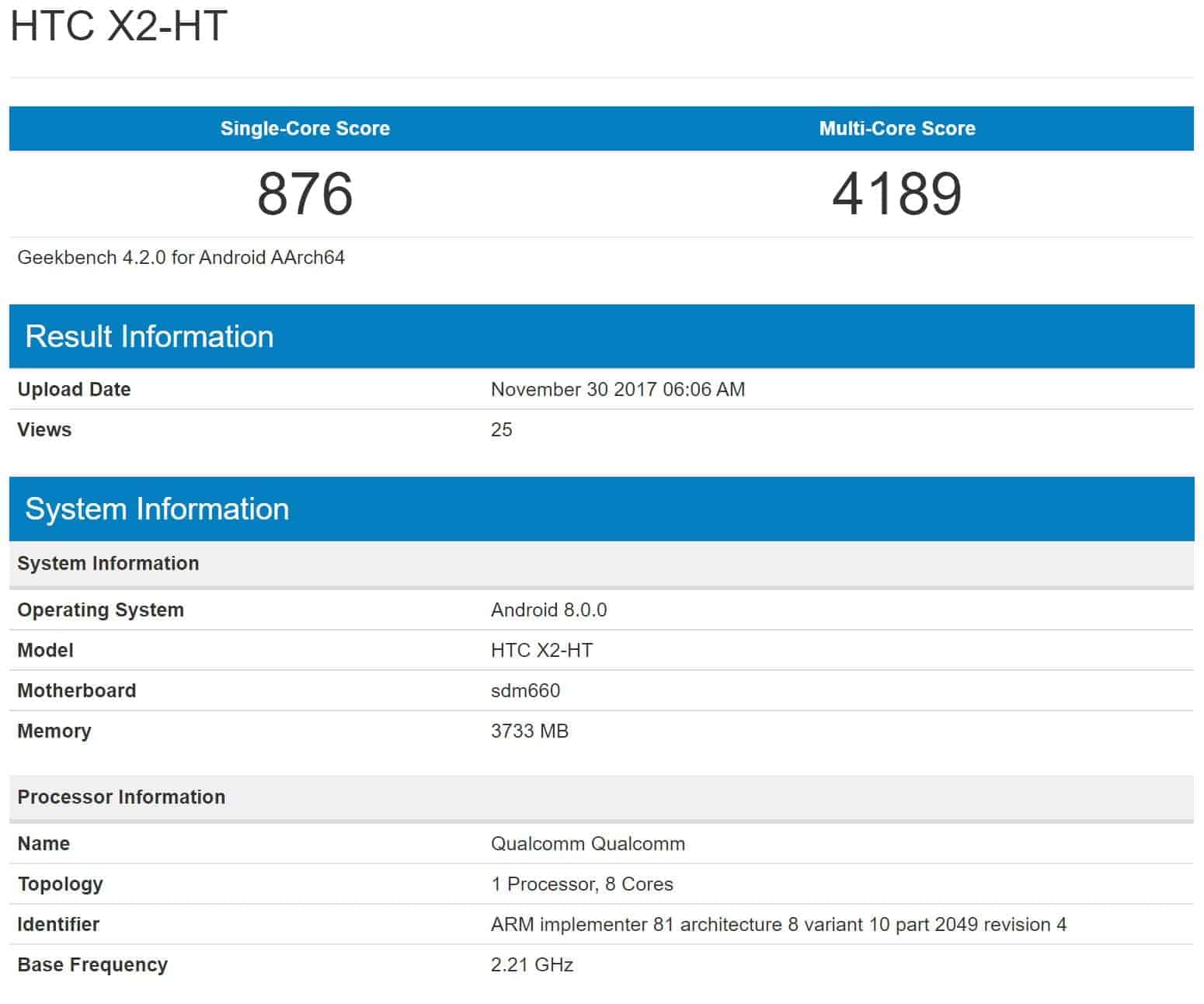